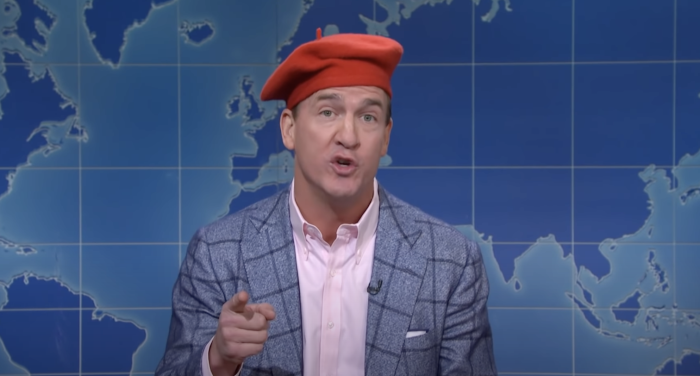 Cold Open — In the White House, Biden’s aides present Russian disinformation about the conflict with Ukraine to President Biden. It’s a bunch of “funny” headlines, repurposed memes, and commercials suggesting that Ukraine wants be to invaded. They introduce a new Secretary of Defense, who is a teenager with a lot of social media skills. It’s a really bad cold open. Really bad. (Watch Here) (Score: 1 out of 10)

Willem Dafoe Monologue — Dafoe talks about his career, his over-the-top acting style, and how everyone thinks he should be the Joker. It’s not particularly funny, but Dafoe is charming and likable as all get out. (Score: 5 out of 10)

Tenant’s Association Meeting — A series of tenants lodge complaints, make announcements, and Dafoe complains about the gentrification of New York City. The whole cast gets in on this one, but that doesn’t make it good. It’s going to be a long episode. (Watch Here) (Score: 2 out of 10)

Now I’m Up — Chris Redd and Keenan sing a song about things that wake them up and keep them up in the middle of the night (iPhone notifications, wife’s sharp toenails, gotta pee, etc.) It’s not a particularly funny song, but it is catchy. (Score: 6 out of 10)

Badminster Dog Show — A dog show that celebrates bad dogs, and how they alienate their owners from their friends. There are dogs who are scared of everything, dogs who are sexual predators, dogs that refuse to walk, and dogs with weird penises, etc. (Watch Here) (Score: 3.5 out of 10)

Nugenix — Frank Thomas, Doug Flutie, and Willem Dafoe talk to a man turning 40 about his “inability to get hard,” even though he claims that he can get hard. Dafoe is a great actor. This skit is not great. (Watch Here) (Score: 4 out of 10)

Weekend Update — Che and Jost deliver groaner after groaner. I’m not complaining. Bowen and Aidy play characters who forecast future trends, and not even Aidy Bryant and Bowen Yang can save it. OK, I lied. Yang and Bryant elevate the hell out of it. And then Peyton Goddamn Manning shows up to talk about last weekend’s playoffs, only he missed them because he ended up bingeing Emily in Paris. Peyton remains the best comedic athlete to appear on SNL. (I am biased.) The man commits. (Score: 6 out of 10 for “Update,” and 8 out of 10 for Peyton).

Beauty and the Beast — Beast gives Belle a mirror that allows her to see her father in his home, who appears to be getting ready for a romantic night with, uh, himself. He’s really into ass play. It was a bad skit, but also, my kid wants it known that it’s also horribly inaccurate to the movie because Maurice was kidnapped first and knew where Belle was the whole time. (Watch Here) (Score: 2 out of 10)

Please Don’t Destroy — These guys are supposed to be the future of SNL, but I don’t really know why. Here, they hang out with a 10-year-old with quick comic timing. I don’t hate it, but these guys haven’t really hit a home run yet. (Score: 5 out of 10)

Office Song — Dafoe plays a temp who joins the office employees during an impromptu song. It’s not a great skit, but it has a great punchline (it involves defenestration). (Score: 6 out of 10)