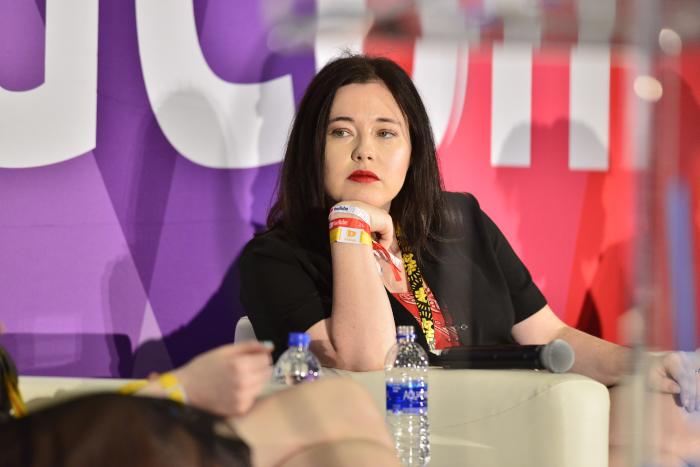 We need to talk about Lindsay Ellis. For the unfamiliar, she is one of the people who pioneered the whole notion of high-quality content on YouTube. She is already familiar to most readers of this site. Kayleigh neatly summed up what she brought to the conversation in her review of Ellis’ first novel:

Axiom’s End is the debut novel of Lindsay Ellis, Hugo Award-nominated video essayist who continues to be one of the true bright spots on the ceaseless hellscape that is YouTube. Highlights of her work include a 40-minute explanation of why the movie adaptation of Andrew Lloyd Webber’s The Phantom of the Opera sucks, a deep dive into the creative, financial, and industry-wide mess surrounding Peter Jackson’s The Hobbit trilogy, and an ongoing series dedicated to exploring the basic tenets of film theory through the lens of Michael Bay’s Transformers series. Ellis thrives in those intersections between the thoughtful and ludicrous that make pop culture analysis so entertaining yet tough to detangle. Why not take Cats completely seriously, even when every groin-thrusting part of its mania practically challenges you to do otherwise?

As many of you might know, after a particularly vicious year of mobbing and “cancellation,” Lindsay has decided to step away from creating content, at least on video. Her open farewell letter is brutal, angry and heartbreaking.

Fellow quality YouTubers showed their support, many of whom have experienced shit like this before.

The video essay as a genre would not exist as it does today without Lindsay. She was one of the first creators to support me and I owe a lot to her. I’m extremely sorry to see her leave the platform, but also, I get it. https://t.co/q7j5LDtk0S

As someone who started their YouTube channel because of Lindsay, I am devastated. What happened to her in April has made me incredibly cynical and dubious about my chosen career, and the scars it may leave. I really hope people take something positive away from this. https://t.co/hepQALqO2b

Hmm when I started making videos, lindsay was the creator I respected most and wanted to emulate. And then her sharing my video essentially made me start growing overnight. Since then she’s been a good friend and a cool person. https://t.co/oIn4IQSKN1

One day we will all agree that being part of a Twitter mob is gross because of how they only hurt people who actually who care and are trying, while assholes and bad actors invite them to gain more attention and clout.

Until that day, I support everyone who just leaves.

How did this pile-on start? Earlier on 2021, Lindsay published an unfortunate tweet comparing Raya And The Last Dragon dismissively to Avatar (The Last Airbender, not the Cameron one). Was it reductive? I wouldn’t know; I’ve mostly avoided Disney content for the last two years. I can understand why it is a problematic tweet, why it could be easily construed as dismissive towards media by and about Asian people, a group that has just now begun seeing themselves represented on “Western” media and has experienced a terrible couple of years in the “West.”

The problem is that all those nuances are too much to place on one tweet with a questionable take. We should all know that 280 characters chunks do not help nuanced conversations. Whatever made her tweet questionable requires a nuanced conversation, one that can be discussed calmly, with backs and forths. I hate using the term “civil” because it’s been co-opted by bad actors in the GOP and the useless centrist bores, but these are exactly the kind of conversations that demand civility, the ones about representation, nuance, and blindspots. The ones between people who in the general and in the specific share the same values and viewpoints. With that being said, Lindsay was well in her right to consider Raya derivative or simply not that good.

The problem is that social media would never allow for a nuanced conversation; indeed, no nuanced conversation was had. Hordes of trolls harassed Lindsay with everything you’d expect from a cancellation crowd: Spamming, DM attacks, death threats, isolating her from any community. In short, making her radioactive. Or as we know it, Gamergate shit.

This wasn’t the first time that this has happened to Ellis. This time, however, it came from her side, from our side. From that ill-defined pseudo-community of poorly disciplined, zero-energy, ineffective, very American, solipsistic wankers who are the vast majority of the Very Online US Left-wing.

This wasn’t the first time Ellis experienced this. The first time it happened it came from the same internet fascists whose toxicity on YouTube she has worked to counter. It got so bad it required Hank Green to call for a love bombing of support (TW abound for the video below):

This time around, there was less support, and according to Ellis herself, turncoat friends. This time, she decided to answer, apologize and take accountability whenever needed. She also told the mobs off in the only way she could: Through a nuanced, insightful, imperfect, and honest 100-minute long essay.

(I’d recommend reading this piece through before going deep into the videos.)

I wanted to write some more about what Lindsay Ellis didn’t deserve. I wanted to contribute something, to say that she might’ve messed up here and there, but those screw-ups were nothing compared to the absolute net-positive she has been for internet culture, even back when she was the “Nostalgia Chick” in that channel that shall not be mentioned and where she raised the bar way above what the people in that channel could reach. She also helped usher in this ill-defined, pseudocommunity of Leftist, English-speaking creators on YouTube, the so-called “BreadTube” that — though screwed over by the algorithm and the hordes of fans of Rogan, Peterson, and Ben Shapiro — has managed to create a major conversation space, one that has helped in the deradicalization of thousands of people and one that is only getting better as it becomes more diverse.

There’s nothing more that I could add about what Lindsay went through. Nothing that hasn’t been said better by other people on Reddit (of all places) and by some of the same people her YouTube project helped, in particular allies to creators in the intersections of the LGTBQI+ and POC communities, like Jessie Gender stressing the importance of recognizing the humans on the other side of the screen and how we are all going to screw up at some point because of our blindspots.

The Reddit commenters below couldn’t have said it better when it comes to the constant burnout that is being a YouTuber, more so if you are making a quality project. It gives a level of fame on a global scope, but not the kind that will make you wealthy enough to pull out. One where para-sociality has become a feature, mainly because these are people very much like us who have gained popularity and made a living out of content creation without the traditional gatekeepers. People whose critical mass of followers still allows for some degree of direct interaction with the fans but is not large enough to afford a third party to manage those interactions. There is a much greater chance content creators like Lindsay Ellis will get to read and hear everything that is being said about them from the primary sources … and when the feedback is positive. Imagine how it is to deal with targeted harassment.

There’s also the thing about who might also be behind the targeted harassment, from the Left and the fascists:

This YouTuber/BreadTuber commentary is also worth a watch. He goes one step further, warning us that this particular type of harassment of Leftist content creators, many of whom originate from marginalized groups, will lead to self-harm, the kind that has people saying “HOW DID WE GET HERE?”

As Lindsay and many others have concluded from this shitshow, the level of vitriol that is leveled at Leftist content creators from among their own is another expression of hurt people hurting people. Our annoying tendency to seek ideological purity because of the trauma of being thrown under the bus by suppose progressive politicians. These mobs are communities of people who have experienced loss in their personal lives and in their lives as citizens, especially after 2016. Against a group of far-right politicians and billionaires who have no shame, they come to the wrong conclusion that the only way to see justice is by exercising it among their own ranks, using all the anger and energy they haven’t used in their real life.

I want to close this off by addressing the Very Online Left, the English-speaking one in the US IN PARTICULAR. I have the well-earned right to lecture here. My message to you is: What have you ever won? What are you doing with your life? Why do you keep expecting that wasting your energy on social media will get you and your country anywhere? Anger is much more useful when putting boots on the ground and helping to build an actual community? There’s nothing to be won by shaming people that can feel shame but need a conversation. Invest this time on the 2022 midterms, spend it doing door-to-door GOTV. If you see a leftist internet crowd attacking someone who has always been a net positive, then maybe — probably — you’re actually being whipped up by a few fascists. Don’t fall for it.

Thank you Lindsay Ellis for educating us. Hopefully, you get all the support you need and more. We’re good on new stuff, and I know we’ll be rewatching your catalog for years to come.

Alberto Cox is, to be fair, a mediocre example of a Leftist.


← Review: Finnish Oscar Submission 'Compartment No 6' Takes Us On A Trip We Won't Soon Forget | Peyton Manning Steals the Willem Dafoe Hosted 'SNL' with a Tribute to 'Emily in Paris' →