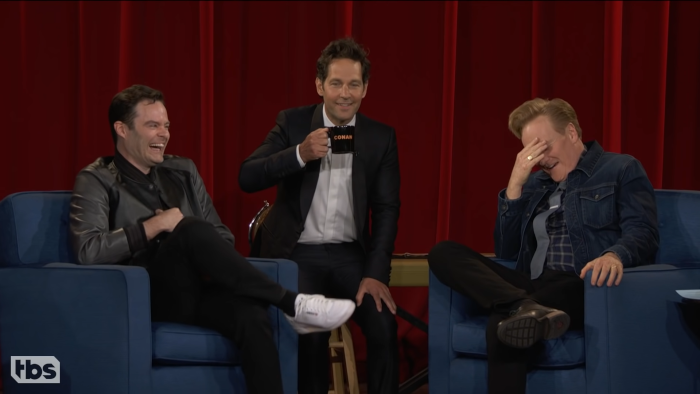 Few bits are so good they can make the jump between mediums. It is a difficult task. Something that works in a comic book may not go over well in a movie. Your favorite cartoon might not hit as hard as a concept album. It stands to reason that someone could be skeptical of, say, a recurring late-night talk show bit being adapted on a podcast. I’m here to say that you can throw that skepticism aside.

Paul Rudd frequently appeared on Conan O’Brien’s various talk shows for over twenty years. In those appearances, he had a recurring joke. If you’re reading this, you likely know what joke I am referring to. For the uninitiated, Rudd would pretend to have a clip from whatever upcoming project he had and would instead play a clip from the 1988 film Mac And Me. Rudd even showed up unexpectedly at one of Conan’s last shows to pull this prank.

When Rudd made another appearance on Conan’s podcast this week, I assumed it would be a standard affair. They would make silly jokes back and forth, fall too deeply into a bit, and I would have a good laugh. That happened, but a surprise touch made it even more special. Rudd told Conan that he was working on a new audio project that he had co-written. He claimed it was sweet and funny and that if Conan wanted, he could share a clip. The clip? The very scene from Mac And Me that he had played for years.

Rudd deciding to play the clip at all is, in and of itself, hilarious. It even took me a second to realize what was going on. What sells the moment the most is Conan’s reaction. He is so genuinely surprised and happy. I found myself cackling so hard in the kitchen that I almost burned my dinner. The joke seemingly works more because it doesn’t work. Conan could apparently see the clip on a screen but we, the listening audience, saw nothing. I wasn’t laughing any less. If anything, I was laughing more.

Yes, I absolutely needed Paul Rudd to once again prank Conan with the Mac and Me bit but this time on a podcast with Conan just screaming the whole time "you can't do this on a podcast" pic.twitter.com/jgFYA93uP6