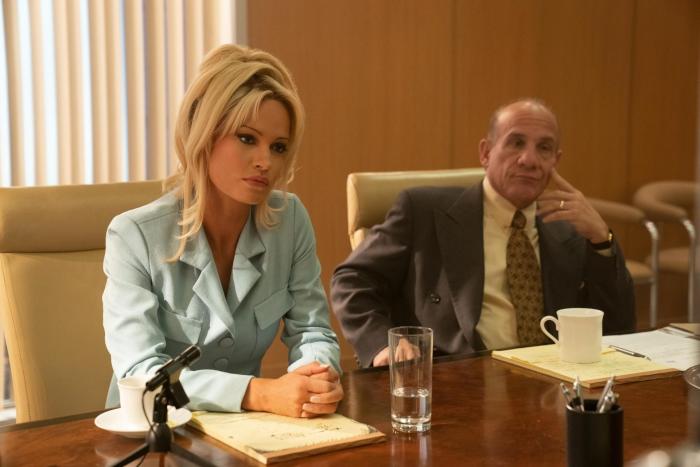 Pam & Tommy, Hulu’s series chronicling the buildup to and the aftermath of the world’s most famous sex tape, blasted onto small screens in an attempt to paint a fresher portrait of the crime that upended their lives. The ubiquitous “sex tape” of Pamela Anderson and Tommy Lee was a huge part of the infancy of the internet and entered the culture as a whirlwind disaster that many presumed was a publicity stunt to benefit the duo. Culture handled the tape as, well, a “sex tape” as opposed to a stolen piece of private media that proliferated as a result of criminal activity. The series aims the camera at Pam and showcases her journey of trying to protect her privacy under the guidance of a bunch of men. Pamela has a different experience with the world around her than the men in her life do, and while they appear to be looking out for her best interests, they push her through a justice system that isn’t built for people like her. The justice system, imperfectly built on some fundamental ideologies of truth, is patriarchal, and Pam & Tommy shows how it fails victims of sex crimes, specifically women.

At around the midpoint of the eight-episode series, Pam (Lily James) and Tommy (Sebastian Stan) learn that Bob Guccione of Penthouse has acquired images from their stolen sex tape, which he intends to publish in his magazine. Feeling like a pawn in the war between Guccione and Playboy’s Hugh Heffner, Pam objects to the use of these stolen images. The advice from her husband? Sue.

Reluctantly, Pam listens to the counsel of lawyers (more men) and decides to sue Guccione as a means of ensuring her photographs are not printed in his magazine. Doing so creates an all too familiar scenario: her situation is now more public, poked fun at in the cultural zeitgeist, her intentions are questioned, and she’s exposed to the nightmare that is litigation. While the entire series bends into a tale of a woman going through hell as a result of men, episode 6, ‘Pamela in Wonderland,’ puts Pam in the middle of litigation proceedings, screaming the answer to “why women don’t report.”

Leading up to the episode, Pam wonders why only she is being deposed for her and her husband’s civil suit against Guccione, an answer that reveals itself during the proceedings. Sitting across from the table from a collection of lawyers, Pamela is asked invasive questions about her sex life, her career as a model, the number of times she’s exposed herself previously, and the like. Invasive questions about her and her body are lobbed like grenades all under the guise of understanding what makes this tape different. Before the proceedings have been completed, Pam says, “I’m done,” and refuses to continue to participate, which in turn, leads to Guccione winning a successful summary judgment. Upon hearing the news, the men around her lament the surprise, but Pam knew what her outcome would be. To her, she has “no rights.”

Though this deposition scene appears particularly brutal (and is more of a cross-examination, but we’ll save the “Lawyer Breaks Down Lawsuit Scenes” for YouTube), it’s not an uncommon exercise in this type of litigation. (Though the stealing of the tape was a crime, this deposition concerns the civil suit. While it’s different, we’re discussing the justice system in general as it pertains to actions that involve sexually charged acts against women). We’ve experienced this as a culture countless times; if a woman doesn’t sue a man, it probably didn’t really happen, and if she does, she probably has an ulterior motive, and if she is a “slut,” she probably has no right to object to this anyway. There are lots of reasons women chose not to report crimes, or choose not to pursue legal action as a result of those crimes, and Pam & Tommy highlights the elements of the legal system that answer the question why.

The justice system in the US is essentially split into two, civil and criminal. Criminal justice involves the “state” against the perpetrator. In these instances, the complainant or victim of crime has almost no decision-making power. According to RAINN, about 310 out of every 1,000 sexual assaults are reported to police; “13% believed the police would not do anything to help.” In civil justice, like what is portrayed in Pam & Tommy, plaintiffs drive the litigation and are said to take back some of the power. As examined by the CBC, in a civil trial, the plaintiff is able to get their own representation and the burden of proof is lightened from “beyond reasonable doubt” to “a balance of probabilities.” Even still, litigation is stressful and invasive. To victims, it can feel like their privacy is less valuable than that of the perpetrator — even in a civil case, where liberty is not at stake.

Again, the details of the sex crime aren’t incredibly applicable to Pam and Tommy’s suit, which was about seeking an injunction against the publishing of photographs (and were therefore up against constitutional freedoms as a defense), but the reality of the justice system was the same. Pam witnessed groups of men encourage litigation with faith in the rules, and as a result, her personal history and videos of her sex life became fodder for a room full of legal professionals. In the harrowing deposition scene, a powerful and strong woman with almost every resource available to her is seen vomiting in a bathroom stall. As a result of simply wanting to prevent herself from being traumatized and exploited, she is retraumatized and exploited at the behest of clothed men playing a game for dollars and cents.


← Netflix's 'Pieces of Her' Is Hindered by a Lethally Stupid Main Character | What the Hell is Happening on Apple TV+'s 'Servant'? →