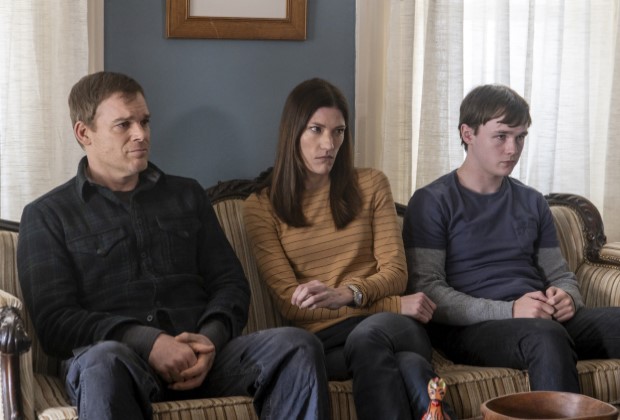 On 'Dexter,' the Truth Will Set You Free. Or Backfire Spectacularly

The thing that works best in this week’s Dexter is also what makes this week’s episode so frustrating: It’s that tension between Dexter needing to open up to Harrison, and the concern about what opening up to Dexter might mean. Ghost Deb said it herself: The only people who have ever known Dexter’s secret are all dead. But if Harrison doesn’t find out Dexter’s secret soon, he may wind up dead anyway.

How much easier would it be for Dexter to navigate his relationship with Harrison if he admitted that he shares the same impulses as his son? The reason their relationship is fractured — and the reason Harrison is seeking out a father figure in Kurt Caldwell — is because Dexter won’t open up to Harrison. But opening up to Harrison might also backfire. Harrison seems like the kind of teenager who might blackmail a parent if he doesn’t get his way. Plus, Harrison is clearly not good at keeping secrets; he told Audrey, after all, that Jim Lindsay wasn’t his father’s real name. If Dexter doesn’t open up, he runs the risk of Kurt Caldwell — a serial killer with a different kind of code — teaching his son how not to channel those dark impulses.

That’s the backdrop of this week’s episode. At the forefront is Angela confronting Dexter about his real identity. Dexter navigates the situation well. He admits that he faked his own death, but tells Angela that he did so because he wanted to start a new life after the murder of Rita and Deb. That’s not a complete lie. Angela seems to sympathize, but also puts a hold on their romantic relationship with him. Dexter has been lying to her since they met, and so she has some trust issues with him. She seems to agree to keep his secret. For now.

I like Angela, but she’s not a good cop, and Molly is not a good investigator, either. Molly the podcaster meets with Kurt and confronts him about why he lied about the whereabouts of his son, Matt (who Dexter killed). Kurt, anxious to line up a new victim after his previous victim did not follow his plan — whatever that is — tells Molly that Matt is back at his camp and then lures Molly out there with the intent of making her his latest victim. A suspicious Dexter follows them out to Kurt’s camp and thwarts his attempt to abduct Molly. He’s on to Kurt, and Kurt is not a fan of Dexter’s.

Angela, at least, is beginning to suspect that something is going on with Kurt. Why, she wonders, did Kurt lie about Matt being alive just as they were about to search the caves near his camp? Angela decides to check for herself, and finds the remains of her best friend, Iris, buried under a pile of rocks in the cave. She immediately calls Dexter and asks him to come because she needs his expertise, not as Jim Lindsay the employee at a fish and game store, but as Dexter Morgan, the blood spatter expert. It is fun to see Dexter map out a crime scene.

Being pulled away, however, means once again prioritizing something or someone else over Harrison, who broke the arm of an opposing wrestler during a match. Kurt is thrilled and congratulates Harrison on his victory, even if it does come at the expense of a kid’s broken arm. Dexter is pissed, and once and for all burns that bridge with Kurt, because there’s no doubt in Dexter’s mind that Kurt is a serial killer, and not the good kind (inasmuch as there is a “good kind”). He needs to keep Harrison away from Kurt, but the harder he tries, the more he drives Harrison toward him.

— What exactly is Kurt doing with his victims? And why does a damaged eye ruin his plan? If Iris was his first victim, how does that play into his plan?

— “Should I shut the door,” Dexter says to Kurt knowing that it locks on the outside. Dexter is trolling a serial killer, but as Dexter said himself, “it’s never a good idea to kill a serial killer’s family member!”

— I hate to say it, but Harrison is annoying AF and is veering awfully close to Dana Brody territory. I hope that it doesn’t come to that, but if Dexter has to kill his own son, so be it.

— It was good to see James “Surprise, Motherf**ker” Doakes again


← Why Celebrities Are Missing the Point of That Jeremy Strong Profile | 'Succession' Episode 9 Recap: "Do You Want a Deal With The Devil?" →