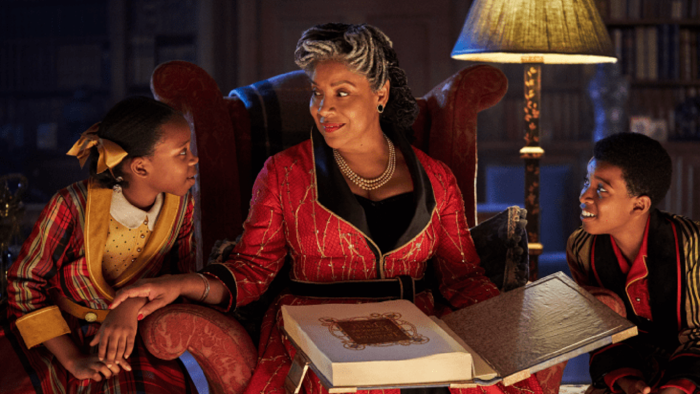 November is a strange month. It’s the bridge between Halloween and Christmas, but everyone seems to ignore Thanksgiving altogether in the entertainment world (the switch from horror to holiday films and series is jarring). That, and we’re still very much in election mode, stressing over whether the fascist will once again win and worried what he will do if he doesn’t.

As we look to entertainment to keep us, well, entertained, this month is also a little dry in terms of new content (besides a heaping helping of Christmas films — so, SO many Christmas films). But, sprinkled in between all that holiday fluff are some other shows and movies, Amazon’s Small Axe and Peacock’s Saved by the Bell revival among them. Here are 25 films and TV shows worth streaming this month.

November 5
Operation Christmas Drop (Netflix) - Chasing a promotion, congressional aide Erica Miller forgoes family Christmas to travel across the Pacific at her boss’s behest. Upon landing at a beachside Air Force base, she clashes with her guide, Captain Andrew Jantz, who knows her assignment is finding reasons to defund the facility. Despite their initial opposing goals, Erica softens once she experiences the customs and communal spirit of Andrew’s adopted home.

Save Me Season 2 (Peacock) - Suspects, secrets, and Nelly’s continuing mission to find his daughter Jody. This series sounds immensely gripping and I’ve heard good things about it.

November 6
Paranormal (Netflix) - Skeptical about the supernatural, a hematologist is forced to investigate enigmatic events when a ghost from his past comes back to haunt him.

November 9
The Mighty Ones (Hulu, Peacock) - The series follows the hilarious adventures of a group of creatures: a twig, a pebble, a leaf and a strawberry. These best friends, self-named The Mighty Ones, live in an unkempt backyard belonging to a trio of equally unkempt humans whom they mistake for gods.

November 10
Dash & Lily (Netflix) - A whirlwind Holiday romance builds as cynical Dash and optimistic Lily trade dares, dreams, and desires in the notebook they pass back and forth at locations all across New York City, finding they have more in common with each other than they would have expected. The series is based on the young adult book series Dash & Lily’s Book of Dares from the New York Times bestselling authors Rachel Cohn and David Levithan.

A Teacher (Hulu) - A Teacher explores the complexities and consequences of a predatory relationship between a female teacher, Claire and her male high school student, Eric. Starting with the simple act of tutoring, boundaries are crossed, and a subtle game of grooming begins, leaving permanent damage that is impossible to ignore. Starring Kate Mara and Nick Robinson.

November 13
Jingle Jangle: A Christmas Journey (Netflix) - Set in the gloriously vibrant town of Cobbleton, the film follows legendary toymaker Jeronicus Jangle (Forest Whitaker) whose fanciful inventions burst with whimsy and wonder. But when his trusted apprentice (Keegan-Michael Key) steals his most prized creation, it’s up to his equally bright and inventive granddaughter (Madalen Mills) — and a long-forgotten invention — to heal old wounds and reawaken the magic within. This is a musical Christmas movie, which sets it apart from the rest of the holiday films this year, so you know I’ll be watching this one.

The Life Ahead (Netflix) - A Holocaust survivor running a daycare business forms an unlikely friendship with a bitter street kid when she takes him in after he robs her.

I Am Greta (Hulu) - The story of teenage climate activist Greta Thunberg is told through compelling, never-before-seen footage in this intimate documentary from Swedish director Nathan Grossman. You know who Thunberg is and what she stands for. Worth a watch.

November 19
The Princess Switch: Switched Again (Netflix) - When Duchess Margaret unexpectedly inherits the throne to Montenaro and hits a rough patch with boyfriend Kevin, it’s up to her double Princess Stacy of Belgravia to get these star-crossed lovers back together. Throw in the unexpected arrival of Margaret’s outrageous party girl cousin Fiona, a third look-alike who has ambitions of her own, and you have the recipe for Christmas triple trouble! Yes, this sounds just as ridiculous as the first one (maybe more so), but hey, we all need some extra fluff this year.

November 20
Small Axe (Amazon) - This one’s an anthology series created and directed by Steve McQueen (Shame, Widows, 12 Years a Slave). There are five episodes, which tell the personal stories about London’s West Indian community from the late 1960s to the mid 1980s. This one should be really good and stars John Boyega, Letitia Wright and Malachi Kirby among others.

Run (Hulu) - There’s something unnatural about the relationship between Chloe (Kiera Allen) and her mom, Diane (Sarah Paulson). Diane has raised her daughter in isolation, controlling every move since birth, and there are secrets that Chloe’s only starting to grasp.

November 22
Dolly Parton’s Christmas on the Square (Netflix) - A rich and nasty woman, Regina Fuller, returns to her small hometown after her father’s death to evict everyone and sell the land to a mall developer - right before Christmas. However, after listening to stories of the local townsfolk, reconnecting with an old love, and accepting the guidance of an actual angel, Regina starts to have a change of heart. This is the story about family, love and how a small town’s Christmas spirit can warm the coldest of hearts. Featuring 14 original songs with music and lyrics by Dolly Parton.

November 24
Hillbilly Elegy (Netflix) - Based on the bestselling memoir by J.D. Vance, HILLBILLY ELEGY is a modern exploration of the American Dream and three generations of an Appalachian family as told by its youngest member, a Yale Law student forced to return to his hometown.

November 25
The Christmas Chronicles: Part Two (Netflix) - It’s been two years since siblings Kate (Darby Camp) and Teddy Pierce (Judah Lewis) saved Christmas, and a lot has changed. Kate, now a cynical teenager, is reluctantly spending Christmas in Cancun with her mom’s new boyfriend and his son Jack (Jahzir Bruno). Unwilling to accept this new version of her family, Kate decides to run away. But when a mysterious, magical troublemaker named Belsnickel threatens to destroy the North Pole and end Christmas for good, Kate and Jack are unexpectedly pulled into a new adventure with Santa Claus (Kurt Russell).

Saved by the Bell (Peacock) - A new generation of Bayside High School students take center stage in this revival of the beloved 90s series. We’ve written extensively about it here at Pajiba and now we’ll finally get to see what we make of it when it premieres. Dare I say that the trailer looks good?

November 26
Over Christmas (Netflix) - Bastian travels home for Christmas and learns his brother is now dating his ex. The brothers bicker until they discover another family secret.

Virgin River: Season 2 (Netflix) - Engagement. Babies. Heartbreak. Murder. For a small town, Virgin River has its fair share of drama — and Mel Monroe is often in the middle of it.

The Flight Attendant (HBO Max) - A flight attendant (Kaley Cuoco) wakes up in the wrong hotel, in the wrong bed, with a dead man - and no idea what happened. The dark comedic thriller is based on the novel of the same name by New York Times best-selling author Chris Bohjalian.

Superintelligence (HBO Max) - When an all-powerful Superintelligence (James Corden) chooses to study the most average person on Earth, Carol Peters (Melissa McCarthy), the fate of the world hangs in the balance. As the A.I. decides to enslave, save or destroy humanity, it’s up to Carol to prove that people are worth saving.

November 30
A Love So Beautiful (Netflix) - A first love story between a sprightly high school teen and her childhood friend from next door. A Korean remake of the hit Chinese drama of the same title.

Finding Agnes (Netflix) - When an abandoned son needs to come to terms with the past mistakes of his estranged mother, he embarks on a journey to find reconciliation and hope.

← An Incomplete List Of Those TikTok Songs Stuck In Your Head (With Complete Tracks!) | 5 Shows After Dark: 'American Ninja Warrior' 12th Season Finale, 'The Amazing Race' on CBS →