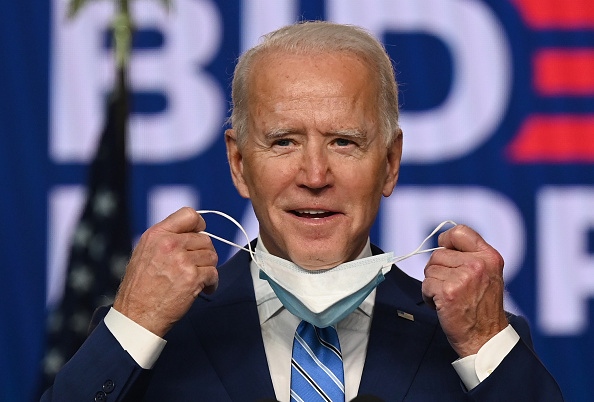 Election Updates: It's Going to be Close in Arizona

9:06 — A new batch of votes have come in for Arizona. Steve Kornacki said Trump would basically need 60 percent of the rest of the voters. This batch came in at 59 percent. It’s going to be close. Arizona is not a done deal.

The numbers are trending well in Georgia, however, and very well in Pennsylvania. Keep those fingers crossed.

5:45 — Nevada says that they will now report out some results tonight. I mention this because, if those votes go blue as expected, Nevada may be called for Biden, in which case Fox News — the only network that has officially called AZ for Biden — will necessarily have to be the first network to declare Biden the winner if Nevada is called before AZ’s dump of votes comes in tonight.

Things are going great in Nevada, by the way.

Let's check in on Nevada pic.twitter.com/Vm8LEKLdJC

Meanwhile, Joe is out there feeling good.

He adds: "I'm not here to declare we've won. But I am here to report, when the count is finished, we believe we will be the winners."

Where will Biden pick up the winning state first? Arizona, PA, or Georgia?

Here’s what’s going on in PA:

If you project Biden continues getting 78% of the remaining mail-in ballots (which might be conservative because so many are in Pittsburgh/Philly), then Biden would get 832,231 and Trump 234,732.

Can Trump still win? YES. Absolutely. Is it likely? It is not. For Biden, meanwhile, Michigan + Nevada + a Georgia, Pennsylvania, OR Arizona will clinch it.

2:50 — Michigan is trending toward Biden now, so all he has to do is win one of the following: Pennsylvania, North Carolina, Georgia, or Arizona. He’s winning in Arizona, but there are 600,000 outstanding ballots remaining, and no one really knows what the true composition of those ballots will be. AP and Fox News have called it for Biden, but I don’t think either knew that there were still 600,000 ballots outstanding.

Maricopa County — where 450,000 of those ballots are — plans to release ballot totals twice today: At 9 p.m. and potentially again after 12:30 a.m. I wish it wasn’t this nail-biting, damnit.

1:00 — The Georgia numbers I posted a minute ago were right, but my math was wrong. I’ve gone bleary-eyed (that said, there is still hope there). Also, this is just straight-up hilarious:

You’ll be shocked to learn that #SharpieGate isn’t a real thing. https://t.co/opAciPK7W4

10:45 — I’m not getting my hopes up yet, but remember that sinking feeling of dread we had around 1:30 a.m. on the morning of November 9th, 2016? That’s what Republicans are feeling right now.

10:30 — Biden’s campaign is feeling good, and expects to be able to announce victory by this afternoon.

Biden campaign manager @jomalleydillon just now: "Joe Biden is on track to win this election and he will be the next President of the United States." pic.twitter.com/hl8x6FfmUR

In the meantime, this may have also contributed to Trump’s lead in Florida, and may prevent Biden from taking Georgia. Wow.

In South Florida, the USPS failed to deliver ~27 percent of the mail ballots.

If we manage to win in spite of the rat-fucking by the USPS, we have to feel at least marginally good about that. Also, we need to fund the hell out of the USPS.

9:40 — I’m not going to get my hopes up yet, but even if nothing else goes our way and Trump is ejected from office, I imagine it might be like curing tinnitus — the constant ringing in our ears would collectively stop, and we could finally focus on what’s in front of us.

Biden’s lead is now currently bigger than Trump’s final 2016 margin in both MI and WI and is projected to grow. Estimates are his PA lead will be bigger as well. If smaller margins were good enough for Trump to collapse the Blue Wall, larger ones certainly OK to rebuild it.

9:00 — The state of Pennsylvania, at the moment according to the political writer for the Philly Inquirer:

Good morning. In PA, here's where Biden's hopes hang:
He has won 77% of mail ballots counted so far.
There are 1.4m left to count.

It's really quite simple. Biden's winning absentee ballots 78-21. The PA SOS says there are 1.4 million ballots left to count. If that's true, then Biden will net-800k votes, more than enough to over take the president

Still on pace without Pennsylvania.

Biden has taken the lead in Michigan, according to the AP
Along with AZ, NV and WI, he now leads in states worth 270 electoral votes—the number needed to winhttps://t.co/8bdQchP5zB

Over on Fox News, they’re saying that they’d rather be Biden than Trump in Wisconsin and Michigan right now.

7:55 — Good morning. I’m sure that most of us are feeling very similarly today: Slightly more confident than not that Joe Biden will pull this out, but really disgusted with the state of the nation this morning because it did not overwhelmingly repudiate Donald Trump after the last four years. Also, frustrated again that a candidate likely to win the popular vote by five to seven million votes is still engaged in an insanely close race.

I know what most of you know at this point in the morning: Biden is narrowly leading in Nevada, Wisconson, and Arizona, looks likely to pull ahead in Michigan, may flip Georgia, and Pennsylvania looks like a Florida clusterfuck, and we may not know the final tally there until Friday.

Hopefully, it will not come down to Pennsylflorida, because Biden has a path through Nevada, Arizona, Wisconsin, Michigan, and Omaha 2, where things are looking favorable for the Democrat at the moment. Things do not look favorable in North Carolina, and things aren’t looking good at all for the Democrats to take back the Senate. More on that when I have the appetite to discuss it.

We can blame the polls, we can blame the choice of candidate, and I’m sure that we can blame a thousand different factors this morning. Nate Silver might be a pud, but it’s not his fault that Miami turned hard for Trump. It’s not Nate Silver’s fault that rural America is a darker shade of red these days and trending redder. It’s not Nate Silver’s fault that tens of millions of Americans looked at the last four years and thought, “Yeah. I want some more of that.” Nate Silver and all the rest of the pollsters briefly got our hopes up (again) and allowed us to believe that the country might not be as bad as the evidence otherwise suggests every single day of our existence.
And it sure as hell isn’t the fault of any of you.

Biden is still more likely than not to win this, notwithstanding Trump’s overnight bullshit. Biden’s win, however, will not erase any of the threats that continue to exist in America, except for one: That existential dread that hangs over all of us. If we can lift that at the end of the day, we’ll at least be better emotionally prepared to deal with all of the rest of bullshit. And if Biden pulls out Georgia, someone better bake Stacy Abrams an amazing f**king cake.

Updates will continue throughout the day.

← Anyone in the Market for a Life-Size Cutout of Timothy Olyphant From 'The Mandalorian'? | Ruth Wilson Admits She Left 'The Affair' to 'Protect' Herself →