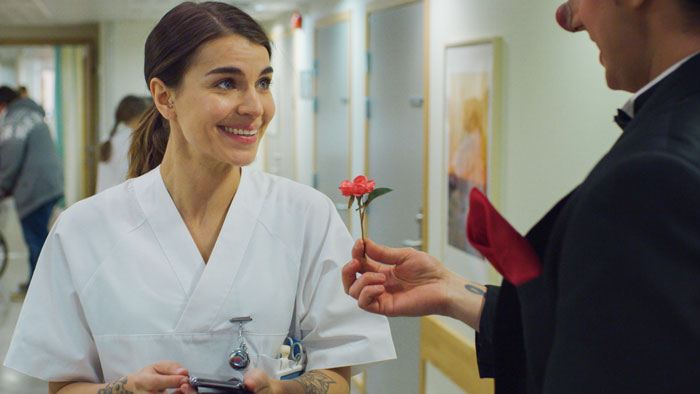 The past few years, Netflix has become dedicated to presenting a slew of yuletide romantic comedies, from The Christmas Prince trilogy, to The Holiday Calendar, The Princess Switch, The Knight Before Christmas, and The Spirit of Christmas, all of which involve a career-focused woman finding love despite her silly ambitions! But the best of the batch is new to Netflix and not a movie at all. It’s Home for Christmas (A.K.A Hjem til Jul), a hilarious, heart-warming, and addictive comedy series out of Norway that’s flipping the tables on rom-com tropes.

The premise is very on-brand for this seasonal subgenre, but its execution offers up surprising and splendid subversions.

Home for Christmas centers on Johanne (Ida Elise Broch), a 30-year-old single nurse, who’s been nursing a broken heart since her picture-perfect beau dumped her three years before. Her biological clock is ticking—as her mother and child-having friends are all quick to remind her—so she better get over it fast. Sure, Johanne’s plate is pretty full between caring for her patients, keeping up with her friends, and helping with her family’s domestic crises big and small. But shouldn’t this diligent, caring, and charming woman also wedge a boyfriend into her very full life?

Johanne isn’t sold on the idea, but she is getting fed up of feeling left out in a world that seems built for couples, from 2-packs of footie-pajamas, to handhold-urging “love gloves,” and paired seating at the family dinner table. Sick of being shamed over her single status, Johanne tells a little white lie. She tells her family she has a boyfriend, and they will meet him at their traditional Christmas Eve family dinner. Now, she has 24 days to find a man.

This spirited series has fun with the possibilities. A comically cringe-y montage pitches her into the deep end with speed-dating, where she meets an overeager momma’s boy, a probable hitman, and a virgin who claims he has cybersex with a dragon on the daily. From there, she’ll try chance meetings, dating apps, and just saying yes to whoever asks. This will lead our hopeful heroine into a Santa-themed escape room, a deeply awkward sauna trip, a prolonged sex montage with a 19-year-old “fuck boy,” a sapphic hook-up with a co-worker, and a horrendous first date with a hipster who dares to speak ill of her favorite movie, which is Love Actually, because, of course, it is.

Home for Christmas ends up having a complicated relationship with Love Actually. First, we’re encouraged to scowl as a bearded buzzkill criticizes the logic of the Richard Curtis holiday classic. However, his critiques that the film’s threads can be a bit flimsy, that they ignore problematic power imbalances within the couples, and that they have unrealistic conclusions, are valid complaints. They’ll actually be echoed throughout season one, as that movie’s memorable scenes get unexpected reversals. For instance, there will be a couple who meets and doesn’t speak the same native language. Instead of romance being spurred from their inability to understand each other, it brews because one of the would-be pair is bilingual and so can speak to the other on his own terms. Likewise, a surprise visit on Christmas Eve comes into play, but we’ll be spared Andrew Lincoln’s sign shtick.

Still, the series doesn’t mock Johanne—and by extension, its audiences’—love of Love Actually or movies like it. Home for Christmas understands that realism isn’t what people want out of romantic fantasies. They want whimsy, wit, and hope! Yet, this TV-MA series elevates the form by folding in frank discussions of boundaries, steamy sex scenes, and complicated characters who refuse to fit into neat little boxes garnished with bows or cinnamon sticks.

To avoid heavy spoilers, I’ll circle back to the so-called “f*ck boy” Jonas (Felix Sandman), a baby-faced 19-year-old who is virile, fun-loving, and treats Johanne like a goddess, giving her fresh-baked treats and five orgasms in one night. From their first hookup, the assumption of the genre—and Johanne’s friends—is that this relationship could never work because he’ll be too immature for her. But in their final scene together, Home for Christmas shows how maturity is a complicated concept with which both lovers are struggling. However, as young as he is, Jonas is emotionally intelligent enough to make a tough call in a strikingly thoughtful way. Which makes the inevitable moment of heartbreak all the more profound, because he’s not a juvenile jerk. Johanne laments, “Why’d you have to be so great?” And we feel that.

Similarly, the show refuses to suggest that all Johanne needs to be happy is a man. While the first season focuses on her quest for a date, she discovers much joy along the journey. She has giddy girls’ nights with her best friend Jørgunn (Gabrielle Leithaug), who between her general daffiness and bold fashion sense seems like a genderswapped Spike out of Notting Hill. Johanne will have deep moments with her patients as they negotiate illness and mortality. She’ll get guidance from a beguiling bartender, a big-hearted brother, and a wizened old broad with a pack-a-day voice, no-nonsense attitude, and unapologetic lust for life. Plus, she will have people repeatedly quote Love Actually, a mirthful albeit hokey reminder that love—actually—is all around.

Over the course of six 30-minute episodes, Home for Christmas carves out a love story that is rich, warm, wonderful, and thoughtfully modern. It introduces a plot where a woman feels unfinished as an adult because she’s not paired up. Then it takes this rom-com cliché and complicates it by questioning society’s need to push Johanne into such uncertainty. It explores not only her joys in singledom but also stitches in threads about “happily ever after” couples whose stories aren’t so happy or ever after.

Home for Christmas celebrates the love, pain, excitement, and hope of love all in a package that’s dazzlingly entertaining with a raunchy and irreverent streak. Its premise plays with a winking enthusiasm less as a whodunit, more as a who’ll do it? It’s a pleasure to play along, guessing who might be coming to dinner in the finale. By the end, I thought I had it all figured out. And I was right. And wrong. I was absolutely delighted and ready to go back for more. I can tell you from experience, it’s a jolly joy on the second watch through too.

Home for Christmas is now on Netflix. There are options to watch it in its native language with English-language subtitles, or with an overdub of English-speaking voice artists. Both options are delightful.