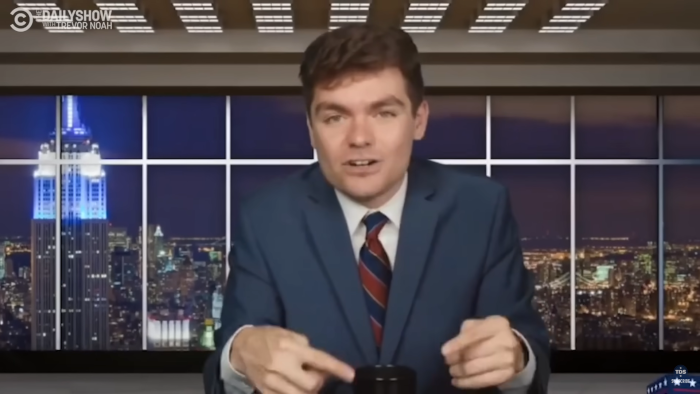 I wish I still lived in a time when I didn’t know who Nick Fuentes was, but that is not the case. He’s an obnoxious, hateful bigot. He speaks with the energy of a strung-out 80’s villain, and he’s just as corny. It’s easy to call him frightening — he’s saying awful things and trying to inspire others to do the same — but at the end of the day, he’s a little dweeb who has been influenced by a gaggle of older dweebs, whether they want to admit it or not.

Fuentes recently had dinner with Ye and TFG. It was reported that the dinner devolved into shouting when TFG learned that Ye wanted to run for President. TFG then tried to distance himself from the dinner and Fuentes. This is par for the course when Republicans are spotted with the hateful little man. They pretend to have no idea about his views or how he expresses them. The fact of the matter is, everything he says can be heard on Fox News.

The Daily Show compiled clips of Fuentes and spliced them together with standard Fox News hate-mongering. The result is an undeniably damning look at Fox’s views compared to one of their most extreme cohorts. They are indistinguishable from one another. Yes, these are specifically chosen clips, but they could not be more similar. It’s hard to know which came first. Is Fox News being inspired by Fuentes or vice versa?

They’re all too cowardly to admit that they like and need Fuentes. He’s like their Batman if Batman couldn’t get onto a rollercoaster without standing on someone’s shoulders. Fuentes can say all the things that they’re too chicken shit to say. Republicans need that hatred to fire up their base, but still want to plead ignorance when their rhetoric gets someone killed. So, they appear at Fuentes rallies, then feign ignorance.

The GOP needs its terrible supporters if it wants to win. Hopefully, one day, it will come back to bite them in the ass. Their message will become so intertwined with the minority that is the far-far-right that they will have to hold their stupid little rallies in the smallest of bingo halls. I’d say it would be rock bottom for them, but when you have no shame, rock bottom is hard to find.

← On T.J. Holmes and Amy Robach: It's Not Cheating If You Have a Good Publicist | Paramount Renews the Most Watched Cable Series Debut of 2022 →