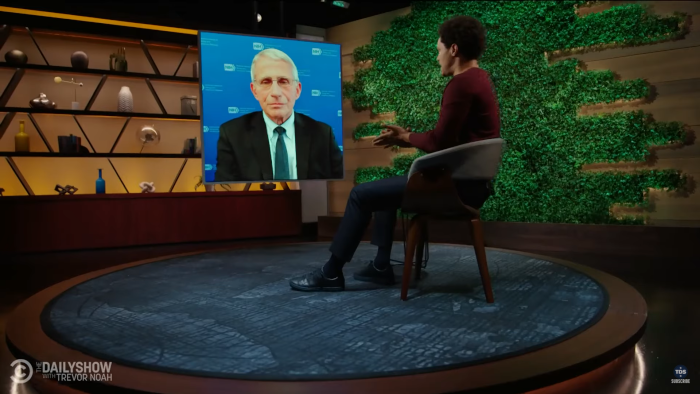 The Daily Show has returned! After a summer-long hiatus, the Comedy Central show hosted by Trevor Noah is back on the air and has brought a whole new look with it. Not only is the show now being filmed in a brand new studio, but it’s also the first time it’s been in a studio since March of last year. Since then, it has been filmed, primarily, in the apartments of Noah and his correspondents. This is the second big return to a studio for a show this week, the first being Last Week Tonight with John Oliver.

The new studio, clearly modeled after Noah’s apartment, is a stark change from the old one. Before, The Daily Show studio resembled that of a cable news network. Now, as I said, it looks more like the home we got used to seeing for the last year and a half. It’s cozy, warm, and still without an audience. Trevor is still rocking sweaters instead of a suit. The whole thing feels like the crew taking this opportunity to finally make the long-running show their own. Trevor Noah has been wonderful in the role, but this final change really makes it feel like a new thing.

The only time I really missed an audience was during Trevor’s chat with Roy Wood Jr. You have two hilarious human beings, riffing and making jokes with only each other there to laugh. It was a little deflating, despite being a stellar segment.

The show also featured Dr. Anthony Fauci as a guest. If you’ve been paying attention to the news, there wasn’t a lot of new information here. What made it worthwhile for me was getting to see Fauci laugh. Call me whatever you want, but the man has been trying his hardest, despite being constantly undermined or misrepresented. It was a pleasure to see him enjoy himself for a few minutes. He’s not a superhero, he’s a person, and people are allowed a little stress relief.

It’s a new era for The Daily Show. With the same confident and hilarious people at the helm. I’m thrilled to see what happens next.


← Casting and Industry News: 'The Penguin,' 'Ted Lasso,' 'Wonka' and Chipotle | Review: 'Vengeance is Mine, All Others Pay Cash' Combines Toxic Masculinity, Martial Arts Parody, and Maybe a Sexy Ghost? →