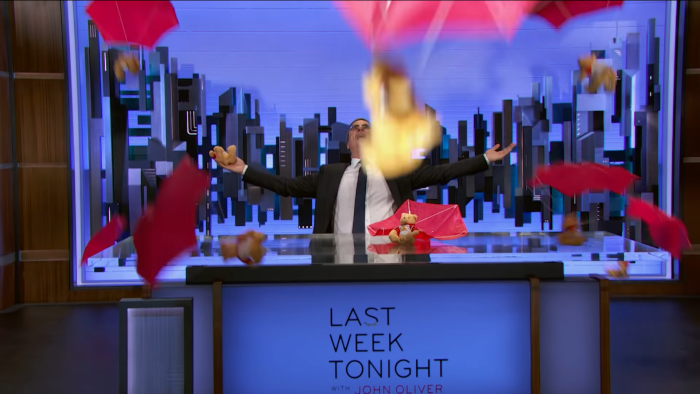 For almost eighteen months, if John Oliver delivered an episode of his show, Last Week Tonight, it was from an empty, white void. All late-night hosts had some version of a “home show” before they returned to their studios. Oliver, to my knowledge, was the last host to hold out. Now, he has returned to his studio and has a live studio audience, and it’s something I missed very much. Understandably, I did not miss it as much as Oliver did.

Some performers are enlivened, emboldened by an audience. They would do plenty well alone, talking into a camera, but when an audience is there, everything clicks on a whole other level. John Oliver is one such performer. As soon as the show starts, his eyes are aglow like a child on Christmas morning. It’s incredibly engaging. It’s been so long since he performed in front of an audience that I had forgotten just how electric he is. He’s so effortlessly engaging that he pivoted from saying f*** you to Texas Governor Abbot to the President of Belarus, Alexander Lukashenko, and I didn’t lapse into a debilitating depression.

I won’t spoil the main point of his piece on Lukashenko here. What I will spoil is this, dictators are bad, but they are much worse if they brag about being dictators. Another moment of note, which isn’t featured in the clip, is that Oliver takes a very pointed shot at companies that haven’t denounced the Texas Abortion Ban. One of those companies is his “business daddy,” AT&T. Oliver not only rips their response, but he also shares their response to him and then, rightfully, tears that down as well.

It was a jam-packed episode that gleefully ushers John Oliver back in front of an audience. He even, as promised in the headline, drops a bunch of stuffed bears in parachutes onto the crowd. Bears that you can purchase here. It would all feel wonderfully normal if, ya know, anything in the world was at all normal.


← Bro! BRO! BROOOOOOOO! The Hawkeye Series Trailer Is Here (Featuring Lucky the Pizza Dog) | People Uninfected by Covid Are Still Dying Because of It →