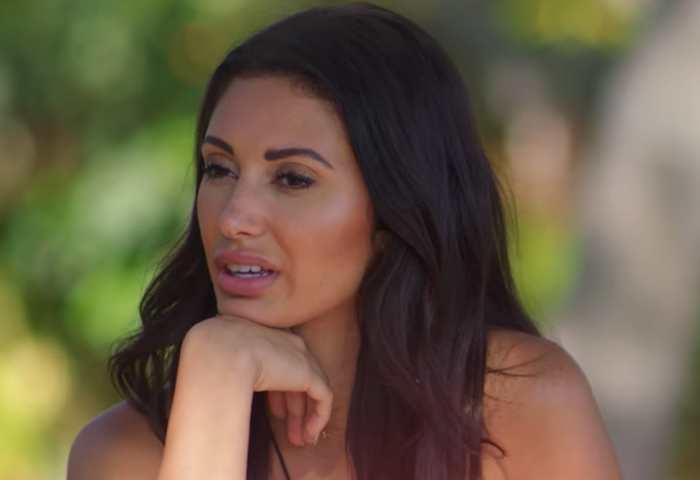 I have a bone to pick with the cast of Too Hot to Handle—they did Francesca dirty, man. Dirty, dirty, dirty, and frankly, I’m not here for it even if I’m loving this show.

So this means if two of them kiss, they cost everyone money. Now, this is what I want in a trash reality show!

However—are you ready to be shocked? Hot reality show people don’t have a lot of loyalty to each other, which became readily apparent when resident “awwshucks me?!” f*ckboi (this is to help us all delineate from the multiple breeds of f*ckbois on the show) kissed the most Kardashian-look-alike resident, Francesca. Then, because he is a gentleman, he asked her to bone, too, because in for a penny in for a pound, ammiright?!

Naturally, money was docked from the community cash chest because this is the nature of the show, and Harry, being the weasel he is—lied and said that Francesca initiated the kiss, and is the real person to blame for the infraction. Francesca tried to then throw Harry under the bus, and shocker of shockers, everyone opted to believe the basic mediocre white guy instead of the woman, and this is the bone I have to pick with these people.

Look—am I willing to believe that Francesca did some shady s*it off-camera to justify why basically everyone hated her off the bat? I mean, sure—we’re talking about vapid, hot, fame-hungry reality show contestants, they are the definition of “I’m not here to make friends.” However—it was gross to see this kind of misogyny at play. No one but the chick who is clearly into Francesca even bothered to entertain the fact that maybe, just maybe Harry was lying.

Why do white guys always get the benefit of the doubt, man?! Why!?

Trash TV is my escape and it sucks to see the indignities of real life bleed into it because it’s supposed to be a time when you can turn your brain off from the f*ckery of the world, and immerse yourself into the f*ckery of hot idiots acting like garbage monsters, usually for money or a date with Bret Michaels. That’s what this really is all about.

I get that Francesca didn’t do herself any favors with anyone (including the viewers) when she purposefully made out with the Hayley to cost people money—but these a-holes started it by happily and readily believing the lie and turning on her so quickly. Also, Jesus-Matthew was way, way, way too eager to take Francesca down a peg or 5, which came off misogynistic, too. He was chomping at the bit when the opportunity arose and was gunning for her from the start. Have I mentioned I really dislike Matthew, because I do, man.

Like I said in the beginning, I fully am open to the idea that Francesca is a terrible person and a lot of what she may have pulled was off-camera to make these people hate her off the bat (although why wouldn’t any of that make it on the show?!) That said—I doubt she’s much worse than anyone else on the show and they brought some of her f*ckery on themselves by believing Harry’s lie over her truth, and why were they so quick to believe the worst in her, anyway? Especially when we, the viewers, knew it was a lie?! Something isn’t right, and I don’t appreciate her getting the villain cut on this show when she was done dirty in the first place.

What I’m really saying is—Harry is the worst, man. Just the f*cking worst. I hope he gets his comeuppance in the next batch of episodes.

← Why Val Kilmer Almost Didn't Play Iceman in 'Top Gun' | When One Part of Twitter Tried to Cancel Adam Driver, the Star Wars Part of Twitter Rose Up and Said, 'Oh, hell no!' →