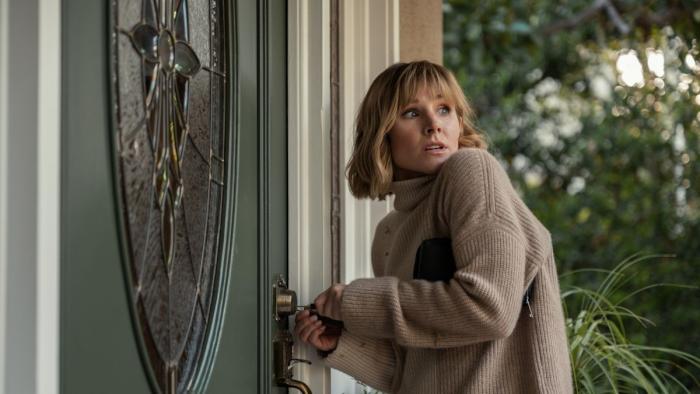 Netflix's 'The Woman in the House Across the Street ...' Is an Odd Egg of a TV Series

Kristen Bell stars as Anna (no, not that one). She lost her daughter three years ago when an imprisoned serial killer ate her during a Take Your Daughter to Work Day (her husband works for the FBI and took his daughter to his work in a prison). She and her husband (Michael Ealy) are no longer together, and a grief-stricken Anna spends all day drinking bottles of wine and staring out her window, while the same handyman (Cameron Britton) works on the same mailbox he’s been trying to install for literally years.

Anna takes a fancy to Neil (Tom Riley), a new neighbor who moves in across the street. Neil recently lost his wife, and he also has a daughter who is around the same age as Anna’s daughter when she died. After having dinner (a chicken casserole, itself a recurring joke) with Neil and bonding with his daughter, Anna is shocked to learn that he has a girlfriend. She soon, however, witnesses through her living room window the murder of the girlfriend by an unknown assailant. From there, we witness stalking and gaslighting, wrongly arrested suspects, busybody neighbors, a best friend who repeatedly pops by unannounced, restraining orders, additional murders, red herrings, red flags, and red wine.

It’s ridiculous enough to be amusing, but not so ridiculous that it becomes an overly long SNL skit. It’s a tricky balance to strike, and Ramras, Davidson, and Dorf (Nobodies) aren’t always successful, but they are successful enough to maintain our attention (it helps that it’s a short series (8 episodes, 25-30 minutes apiece, which still might be 2 episodes too long)). It also means that the series can be modestly enjoyed by viewers who are in on the joke, but also those who take their trashy potboilers at face value. In other words, you can laugh at it, or you can laugh with it. Either way, though, you’re not going to laugh very hard.

The Woman in the House Across the Street from the Girl in the Window is currently streaming on Netflix.