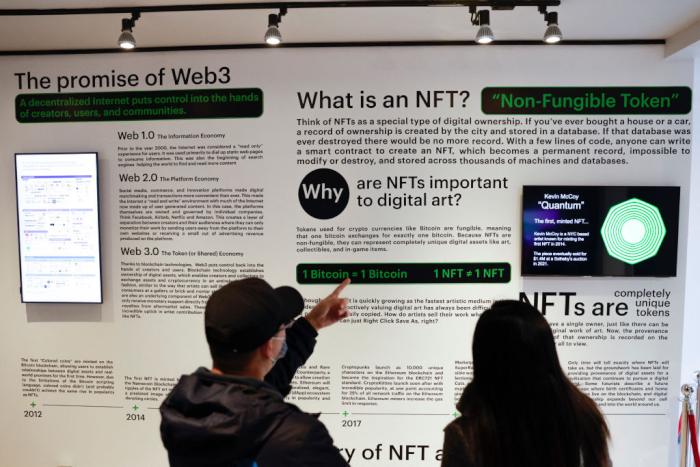 Topics Celebrities Should Avoid for the Foreseeable Future

“My basic, bulletproof solution is that everyone should just shut the f*ck up, all the time, forever.” — TK

What is it about the Covid era that has so many celebrities showing their entire ass? Maybe like us they’ve got so much extra time on their hands that they feel compelled to fill the silence with whatever nonsense fills their head. Maybe the fame convinced them we need their (imaginary) wisdom. From racial slurs to vaccines, from personal hygiene to the Holocaust, it’s been two years of the dumbest statements ever said by a rich person. Not a day goes by without someone cramming their whole foot in their mouth like it’s a psychological compulsion. It’s over the dumbest stuff. So out of the kindness of my heart and for the sake of my sanity, I’ve compiled a brief list of topics celebrities should avoid on Twitter, Facebook, and in interviews. Or, if you prefer, The STFU List.

1. The First Amendment
Let’s get this out of the way right now, because it’s what’ll cause the most outrage. Well, besides taking Joe Rogan’s name in vain. This list isn’t censorship because I have no power. It’s a list of gripes. I can’t order Evangeline Lily to take her anti-vax foot out of her mouth. I am advising the rich and famous that perhaps their energy would be better spent enjoying their wealth and fame than arguing with doctors on Twitter. (Being poor and completely unknown, I have nothing better to do.) Likewise, Neil Young and Joni Mitchell telling Spotify to remove their libraries if they’re continuing to sponsor Rogan’s podcast is not censorship. They are not authority figures for anyone but old hippies. They are exercising their own free speech. Spotify dropping Joe Rogan because of backlash wouldn’t be censorship either, not that they’ll slaughter their cash cow. That’s the free market in action, giving people what they want. School boards banning books is censorship because they’re part of the local government. State governments silencing teachers on evolution or the evils of slavery is censorship. Get the difference?

2. Joe Rogan
Did I write this entire list because I’m so tired of reading Joe Rogan’s name that suicide-by-woodchipper feels like a reasonable solution? Yes. Yes, I did. It would be incomprehensible that a man who fed fame-hungry people turd smoothies on primetime television became the focus of our national attention had we not spent the last 6 years obsessing over a senile racist who fired people on primetime television. We pay too much attention to stupid, whether out of sick fascination or because we are so dumb we vote for demagogues. But still; Joe Rogan? This is the guy on whom you choose to take a stand? He’s a hammered thumb asking stupid questions, like “how many times should I, a white guy, use the N-word on air?” and “How loud should I laugh when my buddy confesses to being a creep?” He’s the avatar of that Insane Clown Posse song where they confuse magnets with witchcraft. But it hasn’t stopped fabulously wealthy public figures from Dwayne Johnson, Jon Stewart, and Andrew Yang from coming to his defense. 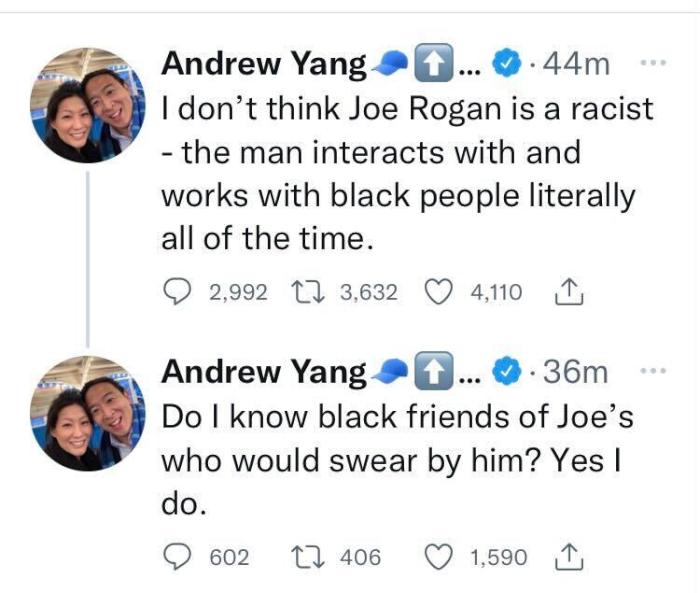 I don’t know who needs to hear this, but good people don’t use racial slurs. They don’t hear a story about how their friend sexually assaulted a number of women, one of whom later said it “ruined her,” and laugh about it. There is no clout Joe Rogan can offer an A-list celebrity like Johnson that balances out the bad. He can apologize and delete all the evidence he likes; he’s still trash. No one needs that stink on them. Besides, nothing’s going to happen to Rogan. Spotify won’t drop him and he’ll keep making money hand over swollen fist. And while we’re on the topic of Joe Rogan’s show:

3. Race
How can I put this delicately? If you feel the overwhelming urge to talk about the “Black community” or “Hispanic experience” or “Asian experience” and you don’t belong to those communities or you don’t have an appropriate higher education degree, I want you to put your entire fist in your mouth and push until your elbow touches your teeth. We don’t need two more white guys without a lick of knowledge between them debating the definition of Blackness. I’m extremely white and even I know we gain nothing from that dialogue. And while we’re on the subject, there are a bunch of words you shouldn’t use if you don’t belong to that group. Joe Rogan deleted over 70 instances where he used one of them. Look, Turk cleared this up for J.D. over 20 years ago. I don’t understand why this is so hard to grasp.

4. The Holocaust
An estimated 11 million people were murdered during the Holocaust. 6 million of them were Jewish. It’s not the only act of state-sponsored mass genocide in humanity’s history, but it is the best documented. Entire populations were imprisoned, tortured, experimented on, and finally executed. It is incomparable to anything in modern America and comparing it to something as innocuous as, say, carrying a vaccination card, makes everyone assume you wear your own ass as a hat. Even if you think you’re helping, odds are good you’ll regret your words. It will never work out in your favor. Don’t mention the Holocaust unless you’re talking about the actual Holocaust or a similar instance of mass genocide. Please.

5. Vaccination
It’s important to remember that no matter how smart an actor appears while playing a role, they’re regular people. People of average intelligence and education who were handed a megaphone because of fame. Most of us couldn’t fill a thimble with what we know about vaccines in general and mRNA vaccines in particular. That’s okay! We all have our own expertise. But it means that we can’t “do our research” by watching YouTube videos. The most we can hope for is a greater understanding of the subject. We aren’t researching jack. So when someone like Letitia Wright talks about “thinking for herself,” it’s important to understand what she means is 30 minutes of YouTube armchair experts confirmed her preexisting bias. If your research boils down to listening to experts, maybe pick the ones who know what they’re talking about. “The vast majority of the medical and scientific community agrees Covid-19 vaccines are safe and necessary. I am vaccinated and boosted, and you should be too.” There you go, celebrities. I did your publicists’ work for them. No charge.

6. Relationships and Parenting
This one requires some clarification since celebrity gossip is very much a topic around here. Who’s dating who, who’s getting married or having a kid, it’s all good stuff. I’m talking about the oversharers. You know who I mean. The “sweaty, desperate couples” who tell you how blissfully happy they are until things sour and then they’re airing their dirty laundry in public. Or describing their unorthodox potty training in excruciating detail. If they were IRL friends you’d duck their invitations because you can only squirm for so long. Some maybe do it as a goof; for others, it’s more a compulsion. It’s a whole lot either way. And speaking of things one should keep private:

7. Poor Hygiene
It hasn’t been a topic for a few months, probably because it got cold and people aren’t showing off their bodies at the moment. But I can’t be the only one who remembers last year’s celebrity obsession with telling us they don’t actually wash. There were Ashton and Mila’s kids, and Kristen Bell’s admission she “waits for the stink.” Jake Gyllenhall apparently waits until he’s so ripe I wonder how Taylor Swift remained in his house to lose a scarf. Brad Pitt and Matthew McConaughey remain au naturel, which comes as a shock to no one. Look, if you don’t wash your junk that’s your business. Until Smell-O-Vision or that new Japanese TV you can lick becomes a thing, please don’t make it ours. I have enough trouble getting my kids in the shower as it is.

8. Cryptocurrency
Much like the stock market, cryptocurrency is a way to move pretend money around, mostly into the hands of the wealthy, as 0.01% of Bitcoin holders control over 1/3rd of the supply. It allows libertarians and the slightly tech-savvy the same dream of independent wealth as lotto tickets, with a slightly higher return but a massive environmental impact. It’s like strip mining a mountain for $1.20 in loose change. It’s capital letter Not Good, which is why it’s so disappointing how quickly celebrities turned to hawking the imaginary currency. From Tom Brady to Matt Damon, Kim Kardashian to Floyd Mayweather, they’re cashing in like the previous generation of media faces did with reverse mortgages and anti-aging supplements. Cryptocurrency is poorly regulated and vulnerable to serious crashes, and mostly a scam.

9. NFTs
NFTs are what happens when you ask a genie to make crypto even shittier. They are metaphorical property. They have no function. No value. When considered as an art form they are objectively uglier than most underpass graffiti and much more harmful to the environment. Cryptocurrency is a financial con dressed up in a futuristic jumpsuit, Tron telling you it’s like investing but cooler; NFTs are a flat-out Ponzi scheme. Beanie Babies are a better investment. Still, celebrities like Jimmy Fallon, Brie Larson, and Reese Witherspoon are not only signing up but trying to convince you to as well. Do not do this. If you have that much disposable income, send it to me. I’ll sketch an ugly-ass monkey and send you a PDF that you can duplicate to your heart’s content. And no one will have to burn down a rainforest to maintain it.


← Netflix's 'The Woman in the House Across the Street ...' Is an Odd Egg of a TV Series | Bullet Points: Anthony Ramos to the MCU, Russell Crowe to the Spidey-U, 'Better Things' and EW →