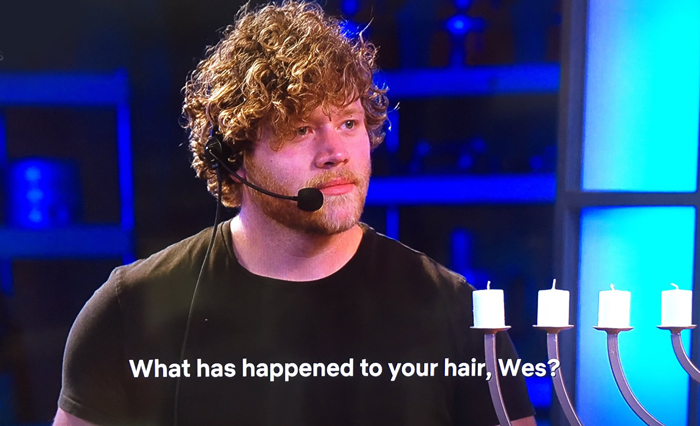 What a treat! What a dream! Nailed It!’s scene-stealing hunk Wes is on Instagram, sharing shots of that gorgeous hair, silly costumes, and much much more!

On the hit Netflix baking competition, “Wes” is typically at the beck and call of Nailed It!’s hostess with the most, Nicole Byer. He hands out prizes and trophies, often adorned in ludicrous costumes. He serves snacks and margaritas to the guest judges, and he is the object of various outbursts from a playful Byer. In all this, Wes seems badgered and comically unenthused, but that’s part of the joke. In actuality, he’s not a bullied production assistant. He’s worked his way up from stage manager to associate director, and he’s definitely in on the gag.

In an interview with ET, Weston Bahr revealed how the running bit began. “They didn’t have an idea of how to bring in the trophy for the first episode,” he explained, “So they said, ‘Why don’t you do it for the first time, and we’ll figure something else out later.’ And then it became a thing. I honestly thought they were going to cut me out of the entire first season.”

They did not, and just like that a beloved Nailed It! tradition was born!

On his Instagram, Bahr shares more behind-the-scenes peeks of Nailed It, like this shot from the Marvel-centered ep.

Check out new episodes of Nailed It! on @netflix. P.S Im TOTALLY NOT wearing a muscle suit in this episode.

Ever wonder what happened to the chocolate-molded mini-Wes from the holiday episodes? Bahr reveals the little guy came to a grim end. Click to the second shot to witness carnage!

When the team @nailedit gives you your molding chocolate likeness and you forget it in the car for 20 minutes when you run an errand 😬. It still came out better than what the bakers made.

Want more of W(H)es in those totally ’90s Hammer pants? Bahr has got you.

STOP. Quarantime. On my lunch breaks on @nailedit I do wardrobe fittings/dance rehearsals

He also laid this thirst trap: a pic from Season 4 in which he’s channeling Patrick Swayze, circa the Saturday Night Live Chippendale’s sketch.

Staying classy on the new season of @nailedit. Hopefully watching me get humiliated will take your mind off all the craziness for a few minutes.

That’s not all! He’s also sharing shots of how he cleans up nice to step out with his gorgeous wife.

Last but not least, brace your ovaries, because here’s that burly Bahr with a bandana-sporting baby!

I hope everyone is staying home and safe with the ones you love.

← The 2020 Hugo Novel Nominations Make for A Great Quarantine Reading List | 'The Good Fight' Premiere Was Set During a Hillary Clinton Presidency. It Was a Nightmare →