We have fresh-baked reason to rejoice as Nailed It! Season 4 hits Netflix. Hilarious host Nicole Byer reunites with master pastry chef Jacques Torres to see contestants through a whole new series of dazzling challenges! They’re back and as good as ever offering a parade of celebrity guest judges and wild new themes, inspired by great literature, Olympic glory, scientific wonder, wedding extravaganza, and the totally rad ’90s. However, in a sea of streaming options, you might wonder if this season is a must-see.

Here are 5 reasons why you’ll want to sink your teeth into Nailed It! Season 4. 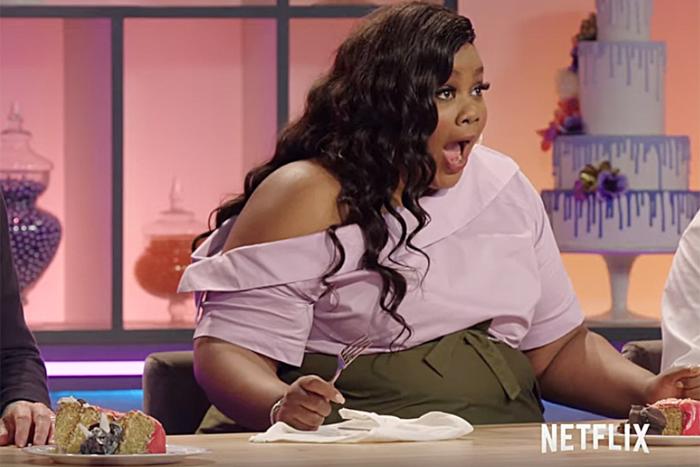 1. Nicole’s “No” sounds.
This charismatic comedienne has been cracking us up season after season with her gleeful cackles, quick quips, and mirthful mugging. Yet as Nailed It! has gone on, a distinctive delight has come in waiting for Nicole’s first bite.

We watch stunned as the competing bakers forget to add eggs, chuck “pearls” in for a tooth-cracking cake mix, and decorate their final products with spit, paper, and trash. Then, comes the surge of suspense as Nicole prepares to take a taste. Her co-host Jaques is often stoic and diplomatic. But Nicole can’t contain her dismay when enduring some of these cake-tastrophes. Bursts of “no!” and clucks of horror tumble out of her mouth along with rejected crumbs. Then, she tries to explain to us at home just how bad things are, declaring, “I put this into my mouth and it became like gravy!”

2. Jacques Torres speechless and not.
The charming chocolatier works hard to be sure he’s got something sweet to say to the contestants. In Season 4, he gets stumped by a confoundingly funky confection. Nicole chuckles as Jaques is truly speechless, and their chemistry is still better than that of 90% of buddy comedies.

While a speechless Jaques is a befuddled delight, this French dreamboat is at his best when he’s letting that accent shine. Sure, it’s cool to have your baking complimented, but it just means more when it comes in his buttery French accent: “What an accompleeshement!” The cherry on top comes in the ’90s ep, where Jaques is asked to drop some theme-appropriate catchphrases, like “Whomp! There it is!” 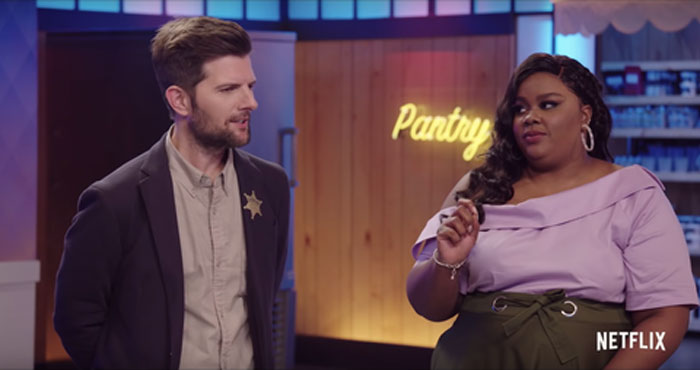 3. Guest Judges Digging Deep To Focus on the Positive.
Season 4 of Nailed It! boasts as its special guests, Veep’s Matt Walsh, Parks and Recreation’s Adam Scott, The Mindy Project’s Fortune Feimster, baking experts Gemma Stafford, Christina Tosi, Valerie Gordon, Rachel Fong, and Olympic gold medalist Gabby Douglas. Each faces a tricky challenge because not everyone can get away with laughing in the faces of the contestants. That’s Nicole’s territory, and it’s been claimed with lots of self-deprecation and empathy. We don’t know these judges like we know her. So, if they tried to scoff, it wouldn’t be something to savor.

Time after time, we see the guest judges take a bite, force a smile, and scrape for a compliment. Like “hey, you tried and you have great moxie and personality! I’m sure you have other qualities!” It’s a kindness and achingly relatable. Who among us hasn’t had to shine it on when asked what we thought of a friend’s one-man show, or a child’s crayon portrait, or a spouse’s culinary experiment? We know this pain, even when Scott laments, “Did you guys both spit it out? Why did I swallow it!?” 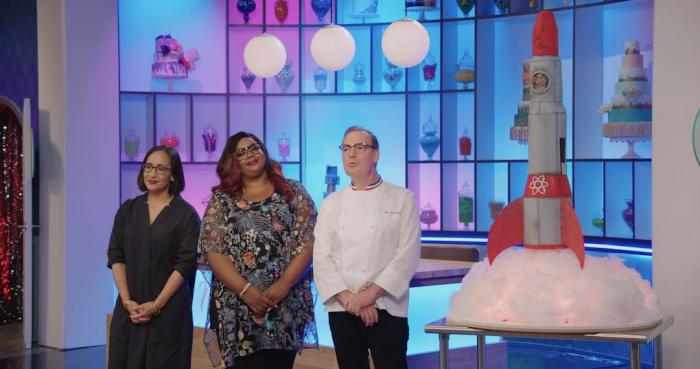 4. New records!
Kidding aside, Nailed It! is at its core about celebrating the little victories found in trying, even in the face of the impossible. To that end, Season 4 offered some historic moments for the fast-expanding franchise!

For the first time ever, the bakers are entrusted with nitrogen canisters to make instant ice cream. In one exciting ep, Nicole declares a contestant has broken the record for the fastest rush to the Panic Button. 37.4 seconds! A science-inspired ep takes the final bake to new heights with a rocket cake that is the biggest the show’s home bakers have ever attempted. Plus, in that winsome ep, the contestants get a little help from their kids, who serve as their baking buddies. Well, that’s in the best-case scenario. In the worst case, a parent now not only has to ambitiously bake but also has to chase their child away from the judges’ table and the pantry, which they treat like a kid would a literal candy store. All that makes for a fun but frantic ep, which makes us wonder if this was a test run for a Nailed It! kids edition?

5. You’ve Developed a Wes Fetish
Oh W(h)es. The curly-haired PA has been Nicole’s willing whipping boy since Season 1, and the show has leaned into pitching this handsome crewmember into scenarios silly and somehow sexy. When presenting prizes and the final trophy, Wes is often decked out in various costumes, all of them ridiculous and delightful. Part of the pleasure is his thin-lipped grimace as he half-heartedly gallops in a cowboy hat and chaps, dances across stage in gold Hammer pants, or shuffles back behind Door #2 while wearing a sloth costume.

We didn’t realize we had a fetish for watching a mild-mannered white man be dominated and mocked by a brassy Black goddess. But here we are, freak flag flying.

Nailed It! Season 4 is now on Netflix.

← Florida Adds Religious Exemption to Stay-At-Home Orders, so Get Ready for Some Bullsh*t | In Netflix's 'Elite', Every New Beginning Comes from Some other Beginning's End →