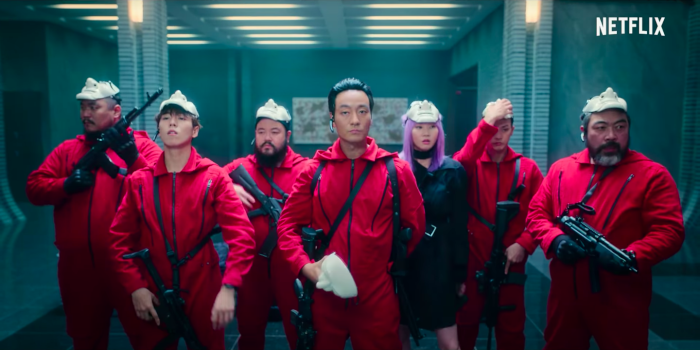 'Money Heist Korea: Joint Economic Area': What Is the Point of a Remake?

In hindsight, the original Casa de Papel had everything going for it to become a phenomenon: A clever twist on the heist subgenre, where the whole point was for it to become a hostage situation; a non-US setting, but still familiar enough for most global audiences; a roster of charismatic and absurdly hot characters (though realistic for Spanish standards); a pseudo-left wing, pseudo-revolutionary aesthetic, harmless enough to be coopted into fashion collections; and finally, its biggest strength in my opinion, it took its time to unravel both plotlines (the planning and execution of the heist) while fleshing out the ensemble. They earned your suspension of disbelief by showing every measure and countermeasure that helped this crew get away with stealing billions from a strategic, European Union hard target. I mean, sure, Spanish law enforcement is that incompetent, but still. And then the three seasons of its “second part” dropped and they went the full Michael Bay.

So, what could the Korean remake offer on its own, other than franchising opportunities?

Well, not a hell of a lot: The domination of Korean film and TV is probably just getting started, and its industry has pretty much redefined the action genre with titles that are as stylish as they are brainy. There are a lot of similarities with Spain, sharing a brutal 20th Century, the horrific Civil War, foreign intervention, a succession of right-wing dictatorships, a very young, fledgling democracy, and rampant inequality, despite its economic success. Then you have the looming specter of the DPRK and the impossible reconciliation between two countries sandwiched between two imperial powers.

La Casa de Papel Korea kicks off five years after said reconciliation comes to fruition. Unfortunately for the now unified Koreans, the unification has only exacerbated the worst traits of both countries: The powerful party elites of the DPRK have become an oligarchy, and millions of North Koreans emigrated to the South, only to become an exploited underclass, and wealth inequality has only grown. A brand-new city (the Joint Economic Area) has been built in the former DMZ, housing the peninsula’s National Mint. That’s where the differences end. Because this remake suffers from an ever-growing problem with franchise adaptations: Being too damn faithful to the original.

The characters share the names and almost the same traits as the original: We have a shy but brilliant Professor (Yoo Ji-tae), who becomes entangled with Seon Woo-jin (Kim Yun-jin), the lead detective in charge of the operation, also a single mom who went through a fraught divorce and lives with a mother suffering from Alzheimer’s. The bank’s hostages include a total asshole of a director (Park Myung-hoon), who also had an affair and impregnated his underling, a North Korean woman (Yoon Mi-seon) who ends up falling in love with Denver (Kim Ji-hoon), who is also a charming, hot-headed thug, who is also the son of Moscow (Lee Won-jong), an affable miner and thief. The characterizations are also the same for Nairobi (Jang Yoon-ju), as an easy-going con woman; Rio (Lee Hyun-woo) as the boyish hacker and former Med-student, Helsinki (Kim Ji-hun) and Oslo (Lee Kyu-ho) as the muscle (no mention of the former’s Queerness so far).

There is a moment, whenever reading or watching something that is not from your culture, when you realize that you don’t understand a reference. It can be a passing joke or something deeply intertwined with the plot, but nevertheless something specific about that culture that compels you to make a mental note and research later. Those moments are a wonderful thing (though terrifying for most Americans) because that cultural artifact has established a bridge between cultural backgrounds beyond the universal. There were none of those moments in this season of La Casa de Papel Korea, save for the Hahoetal masks. There was nothing about the characterization or plot development that couldn’t be filled-in by my cultural background or my cursory knowledge of Korean History. The story beats, production design, and cinematography are all pretty much exactly the same as in the original. Even the action scenes follow techniques similar to the original. Granted, as I said before, South Korean action films have been influencing the genre for the last two decades, but there is nothing in the action here that builds something new.

There are two major exceptions so far. In this version, Berlin (Park Hae-soo) is a survivor from a North Korean concentration camp. Having been imprisoned as a child, after his family’s failed attemp to defect, he is turned into a cold, sinister underworld boss. I’ve always been puzzled that the original Berlin (Pedro Alonso) became a fan favorite, when the motherf**ker was an actual rapist. I guess it’s the same type of people who stan after Johnny Depp, if your rogue act is cool and charming enough, they’ll let you get away with everything. In this version, Berlin is chaotic and evil, and so far, he is apparently not the older brother of the Professor, which creates a more tense relationship between the two.

Meanwhile, this version of Tokyo (Jeon Jong-seo, also the suspiciously omniscient narrator) is a former North Korean soldier, who emigrated to the South lured in by her love of BTS and K-Dramas. Unlike the original, she turns to crime after years of being exploited and trafficked, turning into a vigilante that robs and kills loansharks and pimps. Jong-seo, one of the most acclaimed young actors in Korea right now, actually creates a whole new take on Tokyo: If the original was the definition of Hot-Mess (in every sense of the word), Jong-seo’s is a bottled-up storm, taciturn, disciplined, profoundly sad (not just “sad hot girl” aesthetic) but scheming. Compared to the original, it makes a damn load of sense for the Professor to recruit her. Nevertheless, the power play between her, Berlin, and the Professor is still underplayed, the tensions and fights are wrapped up too easily. Same thing with the Joint Task Force of DPRK and South Korean police dealing with the robbery, which could’ve given us some great subplots of internal chaos and power struggles. Instead, every officer here is way too … competent and respectful of each other

Only in the last episode, the political background comes to the forefront. The Professor was a South Korean scholar who apparently was the mastermind behind the economic plan to unite the Koreas. He was recruited by Kim Sang-man (Jang Hyun-sung), a politician on track for the ROK presidency and Agent Seon’s abusive ex-husband. We are also informed that the heist is happening days away from an inter-Korean summit. This is the closest we get to a wholly different plotline and I really hope it takes us somewhere new in the next season: The Professor clearly got screwed over, but we don’t know how and why.

It’s disappointing to see that this remake is what comes from the union of two of the most inventive industries in film and TV right now, the Spanish and Korean. Is it just the Netflix of it all, sanding over specificities and trying desperately to frack its own clout?