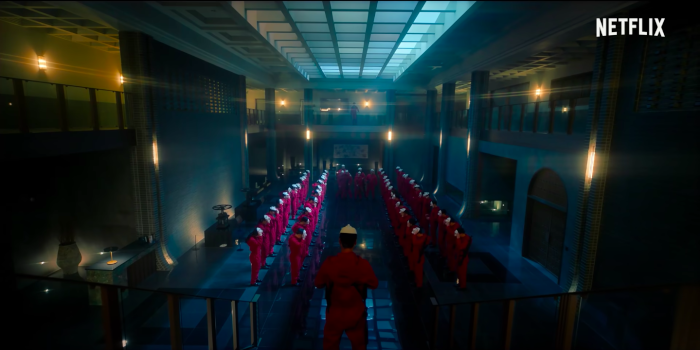 'Money Heist: Korea - Joint Economic Area' Trailer: Maybe This One Won't Be As Stupid As The Original

Well, seems it’s my job now to keep track of international remakes of hit series. As I stated before, this shouldn’t be an issue as long as the new adaptation has something new and interesting to offer, while honoring the themes and characterizations of the original.

It was inevitable that Money Heist (which henceforth I’ll call by its original and better title, Casa de Papel) would end up being adapted for other markets, even though it was one of those actual global hits Netflix used to make and/or purchase the streaming rights. It makes sense that its first remake would be made for the South Korean market, in which Netflix has invested heavily and which itself has had a successful track record adapting international formats (an adaptation of Dr. Foster became ROK’s biggest-ever cable hit) in addition to the skyrocketing popularity of their originals. In addition, the Spanish series follows a similar format to K-Dramas, conceived more like limited series with a longer runtime. La Casa de Papel itself was a 15-episode series in its original network run, quite a meal of a binge, but a perfect portion for a weekend watch. Then they added four more seasons stuck in the same robbery (technically “parts”).

This version has a very clever new premise: South Korea and the DPRK have signed a peace agreement, with the North slowly being integrated into the global economy through a Joint Economic Area, a twist on the Joint Security Area, the setting of a certain classic Korean Film. As it tends to happen when “communist” countries ruled by oligarchs open to the world, it seems that the whole process helped North Korean party elites to seize wealth, chaebol owners to become even wealthier and for the average North Koreans to become … well, as stifled as their South Korean counterparts are right now. The heist seems to follow the same goal as the original: To take over the Korean mint, now producing the currency of the unified peninsula. It does seem like they will actually cover ideas the original was, well, too dumb to actually deal with: How to strike capitalism where it hurts.

There’s a whole 40-minute YouTube essay that could be made about everything that made La Casa de Papel a farce, only coopting the aesthetic of left-wing, anti-capitalist rhetoric, capitalizing (ha!) on a decade of Eurozone crisis and austerity measures that always favored Spain’s conservative government at the time. But La Casa de Papel, both in its universe and in the real world, was just Europeans roleplaying a revolution through this very dumb, very fun, very sexy, and very bloated spectacle. Mostly, it was just a way for the Spanish film industry to prove they could also do a balls-to-the-wall action extravaganza as well as Hollywood.

But South Korea’s industry doesn’t need to prove anything; they have already conquered Hollywood, conquered streaming with their Dramas and they have succeeded at pretty much every genre; they have become the R&D department for the action genre. So once again, I’m interested in where they will take this premise, in a country that has also been dealing with rising inequality and grift … and then went on to choose a neoliberal on steroids because of antifeminism or something.