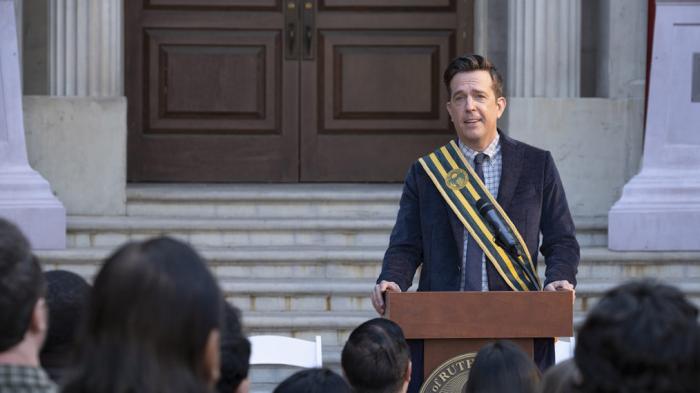 Then again, Rutherford Falls is based on an idea that Ed Helms came up with himself along with Mike Schur (who worked together on The Office), and the two wisely brought in Sierra Teller Ornelas — who is Navajo and Mexican American — to run the show once they determined it would have a Native American theme (it is set on a Native American reservation). They did right by the writers’ room, as well, because it features the largest indigenous writing staff on American television (half of the writers are indigenous). The cast also features Jana Schmieding, who is Lakota, and Michael Greyeyes, who is Plains Cree.

Not for nothing, but it also stars Dustin Milligan — Ted from Schitt’s Creek — and Jesse Leigh, who is a Chinese and American non-binary actor, so there is a lot of representation in Rutherford Falls, but also Ed Helms. On the other hand, Helms does seem well cast as an oblivious white guy who appears to be trying to protect the legacy of his (racist) white ancestor, and if there is one thing that Helms does well, it is to play a boob.

The show looks terrific, too, and while I’m not yet a big fan of Peacock, they do have Natasha Lyonne and Rian Johnson joining forces for a one-hour mystery series called Poker Face, so things are looking up on that streamer, too.