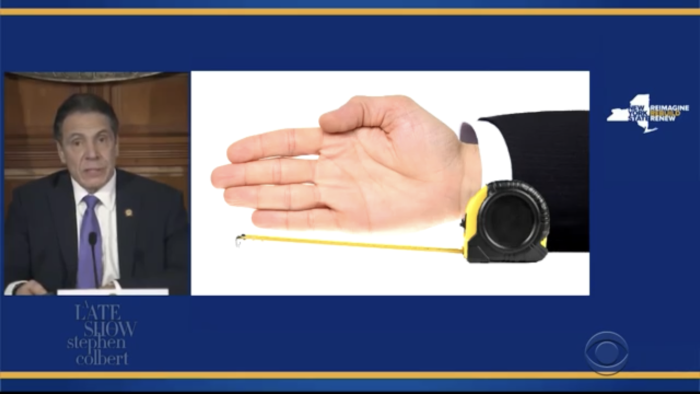 It was only a year ago when people across the country were suddenly giving props to Governor Andrew Cuomo for *checks notes* stringing together complete sentences without screaming. However, most New Yorkers were well aware that the guy was trash in a suit. Now, the rest of the country is catching up as his scandals continue to grow. Needless to say, seeing Stephen Colbert open his show by taking shots at the guy was enthusiastically welcomed.

The setup is simple enough. In a recent report on the Governor, it was revealed that he has an “obsession” with his hand size. So, the Colbert Crew stitched together a Cuomo press conference where he constantly uses pictures of hands for reference. As I said, it’s pretty simple. Yet, it is wildly effective.

The picture painted in this sketch is that of a fallen man. Someone who had his public profile boosted significantly this last year only to watch it crumble beneath him due to his own rampant misdeeds. It’s goofy as hell but also incredibly poetic. Cuomo has a sullen look on his face that helps drive home just how far he’s gone. *chef’s kiss*

← Mike Schur's New Show 'Rutherford Falls' Looks Great (In Spite of Ed Helms) | Reddit Asks the Question: 'People Who Own Multiple Pets, What is Some Drama Going On Between Them Right Now?' →