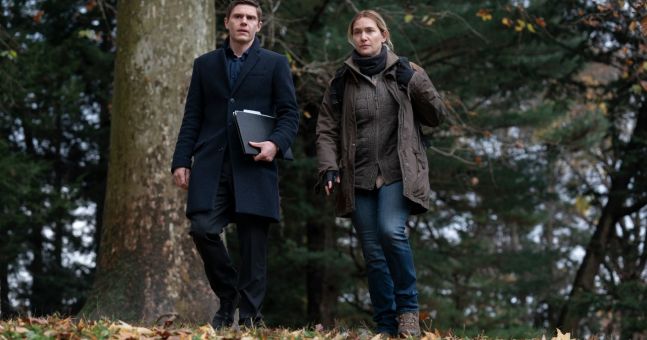 'Mare of Easttown': Now What?!

It’s been a while since we’ve had a television series so effectively and so surprisingly pull the rug out from beneath our feet in a way that did not feel cheap. In a seven-episode miniseries like Mare of Easttown, it seemed like Evan Peters’ Detective Colin Zabel had at least enough plot armor to usher him to the finale. But in episode 5, creator/writer Brad Ingelsby had the wet-behind-the-ears detective with the puppy dog crush on his partner shot in the head abruptly and violently and then director Craig Zobel cut so quickly to the rest of the sequence that we were never given an opportunity to process Zabel’s final moment before we had to worry about Mare. Would they kill Kate Winslet’s character, too? No, obviously not; her character’s name is in the title, but we weren’t given enough time to consider that before Mare managed to lure the serial abductor away from Zabel’s body long enough for her to circle back around, pick up his gun, and put a few in his chest.

Only a few minutes before, Mare and Zabel were bonding over their own failures. Zabel had admitted that he stole the work of someone else to solve the big case for which he’d been given a promotion. He and Mare had a sweet but awkward kiss. And now he was dead, and so was Katie Bailey’s abductor, some stocky rando they tracked down with a partial license plate. He was a nobody, so far as we know, and unconnected to the murder of Erin McMenamin, so far as we know.

Which means … what? I have no idea! Zabel is dead, and one mystery is solved, which I suppose allows Ingelsby to clear the field, so to speak, and focus on the investigation of Erin McMenamin in the last two episodes. It doesn’t necessarily limit the list of suspects, but it does make the pursuit cleaner since they can separate the blue van and the missing girls from McMenamin … unless the rando guy also killed Erin, which would be … disappointing.

In the meantime, Dylan — who we know is not the father of Erin’s child — sneaks back up near the top on the list of suspects, if only because he stole the money Erin was saving for her kid’s operation and burned all of Erin’s journals, save for the page that Erin’s best friend Jess pocketed. Dylan and Jess know something, but I’m not sure that they were involved in Erin’s murder.

Deacon Mark, too, seems less likely, if only because he explained away the red flags to Father Dan and, though he is sniveling, he doesn’t seem like the cold-blooded murdering type. The Rosses are also suspicious, if only because John Ross’ son was hiding his affair with an unknown woman from Lori. It makes him a bad husband, but not necessarily a murderer.

I suppose we have to ask again: Who had the most to gain from Erin’s murder? Unless the woman with whom he was having an affair was Erin, it seems unlikely to Jon Ross. I don’t think Dylan would kill the mother of his child over a few hundred dollars, especially knowing that he’d be left solely responsible to care for D.J. Even if he was having an inappropriate relationship with Erin, I don’t see Deacon Mark pulling the trigger, either. A lot of folks want to pin it on Richard Ryan because we’ve seen enough Guy Pearce movies to know that he’s capable of it, but there’s no known motive, and it’d seem weird to wait until the last two episodes to create one.

I continue to return to Frank Sheehan and the possibility that Kevin fathered Erin’s child before he took his own life and that Frank knew about it. Frank reached out to Erin to help out with his grandchild but ended up sleeping with her, which left him with the most to lose. If the affair came out, Frank’s wife, Faye, would leave him, and he’d lose his job, and his life would be ruined. Why, after all, is Frank in the doghouse with Faye? Why didn’t she check out the wedding venue? Why did Faye give Mare that look in the second episode when Mare questioned Frank about Erin? Why did Frank lie about having no relationship with Erin?

We could probably manufacture a case against several suspects, but the easiest one to manufacture right now is against Frank, which still makes him my most likely suspect. In the meantime, RIP Detective Colin Zabel, and so long to the only Evan Peters’ character I’ve ever really liked.