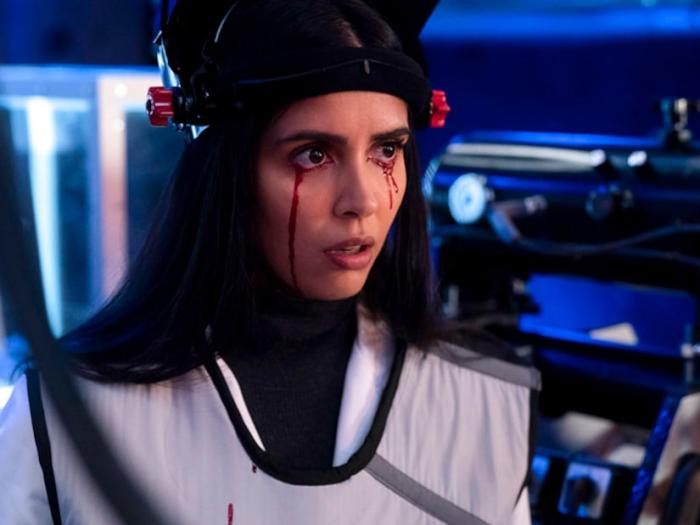 In the family drama portion of this week’s one-episode edition of Manifest, Paige Jennings from The Americans seems determined to replace Olive in the Stone family, and Olive very suddenly doesn’t care for it. You invite an unstable teenager with abandonment issues into your home, and this is how she repays you? Who could’ve predicted?

Meanwhile, in the love triangle portion of the episode, Jared and Sarah (the daughter of The Major (RIP)) have a double date with Michaela and Zeke at their home (with Beverly). Over the course of the dinner, Zeke has an empath calling, which reveals that Sarah is good people. At the end of the dinner, however, Beverly (the lady with dementia) tells Zeke that her unofficial empathy callings tell her that Michaela is still in love with Jared. Poor Zeke. Never trust the love of a woman who agrees to marry you if she thinks you’re going to die the next day.

In the callings portion of the episode, Ben is now working with Eagan (the guy who abducted him two weeks ago and kept him captive in his basement) because he’s good at deciphering callings and also Ben wants to “keep his enemies close.” Eagan and Ben are having callings that involve flooding and a lion crying tears of blood, and in Michaela’s calling, all she sees is blood dripping from her eyes. Olive is trying to crack the calling by looking up ancient myths about flooding and lion crying tears of blood.

They surmise that there’s a lie at Eureka (the NSA facility) threatening everyone’s lives. Michaela rushes to Eureka and confronts Saanvi about the lie, and she confesses what she knows about the driftwood from Noah’s Ark. The tears of blood do not go away. She has another lie she must confess or she’ll die. Reluctantly, Saanvi tells Michaela that she killed The Major. Her condition clears, and Ben and Eagan’s callings disappear. Saanvi is saved (but may have a murder rap to contend with).

Before Ben’s calling disappears, however, it reveals Al-Zura’s Journal, which we’ve seen before. Ultimately, Ben concludes, based on the journal and the events of the episode, that to save the lifeboat (the 828 passengers), some people who don’t have clean consciences may need to jump … or be pushed out. Eagan — who downloaded all the information from Ben’s computer onto a flash drive while he wasn’t looking — may be someone who needs to be pushed out.

Before Saanvi was hit with the bloody tears, she was simulating dark lightning on the driftwood from Noah’s Ark, thinking it will “alter it.” It doesn’t appear that the simulation worked, but when the NSA scientists slow own the video footage, they discover that the dark-lightning experiment on the driftwood caused it to disappear and reappear 37 milliseconds later. At the same moment, there was a tiny earthquake beneath them. They have reverse-engineered a miracle.

What does it all mean? That remains to be seen, obviously, but I will say one thing for this episode of Manifest and the season overall: They are starting to pull back in some of those seemingly aborted arcs from earlier episodes and seasons, like the dark lightning and Al-Zura’s Journal. It’s a little slap-dash, but it’s nice to see Jeff Rake start to bring more elements together.