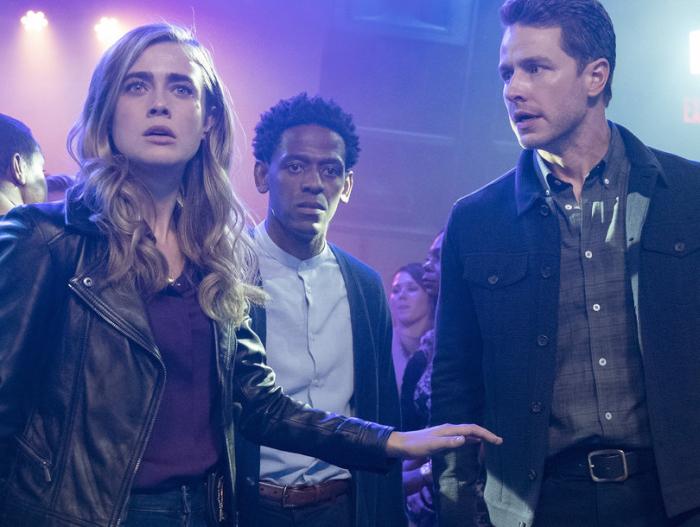 Making Sense of the Bonkers Nonsense On This Week's 'Manifest'

Manifest is what would happen if Vince Gilligan’s thought processes were turned into an algorithm and put into a laptop computer and that laptop computer was bashed repeatedly against a dumpster until it caught fire. Manifest is the remains of the burnt shrapnel, a TV show that looks upon trash fires with envy. The scripts are written as though with the blood of the bashed-in brains of the 1,000 monkeys slapping at typewriters, while all the series regulars act as though they enrolled in the Keanu Reeves School of Wooden Acting and failed.

But you know what? This episode wasn’t that bad. I mean, it made no f***king sense, but I managed to consume the entire episode without taking several breaks to recover from the dumb. It’s either because it was marginally better than most episodes, or because — in a fugue state — I ripped out my brain stem and gouged myself in the ear with it.

OK, let’s backtrack. Remember 3 or 4 episodes ago when I wrote this about a character who basically appeared in an episode for all of 20 seconds as a glorified extra in the church where the cult met? 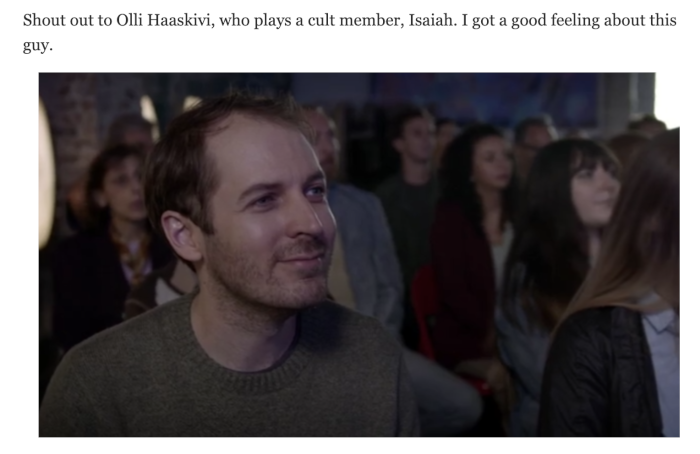 Well, that character, Isaiah, actually briefly appeared in the third episode of the first season — he had been imprisoned for murdering a passenger, although he claimed that he just held her while she died (you know, like when the rabbits in Of Mice and Men just happen to die while Lennie is holding them). Somehow, he avoided prison and returned as a member of the cult, and no one put two-and-two together (Shhh. Shhh. Don’t try and make sense of it, you’ll hurt your pretty heads.)

Anyway, it turns out that Isaiah (Olli Haaskivi) is the motherf**king Keyser Soze of this season of Manifest, the quiet unassuming kind of creepy guy in the corner who texts all the passengers and asks them to come to a club where he locks all the doors and lights that motherf**ker on fire and kills a slew of passengers. Madness!

Let’s back up, briefly: Last week’s episode ended with this mysterious calling, in which Ben, Michaela, Saanvi, and the Miracle Cult leader, Adrian, were all seen inside the charred remains of Flight 828 with several dead passengers.

Back to this. #Manifest pic.twitter.com/ZyOdZ2a4Vd

That calling was actually foreshadowing the fire that Isaiah would set in the club this week, which killed several passengers including Olive’s boyfriend, TJ.

How adorable is this Tolive moment?! #Manifest pic.twitter.com/77smKV8NHH

OK, first off. Big ups to Manifest for finally hiring a script coordinator! Not only did Manifest manage to stick with the same storyline for two episodes in a row, but they actually seeded in the bad guy, like, four episodes ago! It’s almost as though the people in the writers’ room got together and wrote an arc instead of just stitching together four random episodes. Well done, Manifest! It must be Girl Scout cookie season because YOU GET A COOKIE.

So, T.J. is dead. Bummer, I guess, but at least he gave his dead mother’s charm bracelet to Olive before he bit it. Meanwhile, Manifest isn’t done blowing our mindholes. Because when Ben was carrying Olive out of the burning club, he saw a glowing light in the distance.

Cut to the end of the episode, where Ben picks up Al-Zuras’ ancient journal, which the library had delivered to his office. When he opens it, guess what he sees? A painting of himself carrying Olive. It’s like God took a picture of Ben and Olive, and the flash from the camera is what Ben saw when he was walking out of the club.

All will be illuminated in time. Thanks for joining us for that Calling. #Manifest will be back on Monday, March 2! pic.twitter.com/xmkudKuFbc

Is your mind sufficiently blown? Because wait for this additional revelation! Sunvii is … bisexual.

Yeah, I’m sorry, but literally no one cares or understands what Saanvi is trying to do (including the writers), although it has something to do with replicating the experience of jumping ahead five years in time and inserting that experience into a person’s DNA. It’s apparently the only way to save the passengers from their death date. (Don’t worry! You won’t have to remember this, because the writers will abort this arc as soon as they think of something that makes more sense than linking time travel to genetic sequencing).

Finally, Derek hasn’t relapsed, and Michaela is ready to commit to him.

She said the words! #Manifest pic.twitter.com/e80DSRvIsn

But I’m ignoring the best revelation in the entire episode! During the fire, a woman was trapped under a burning post. Derek picked up that burning post and freed the woman. When he went to Sanvii to treat the burns on his hand, however, he discovered that his hands weren’t burnt. They were … frostbitten, like he never left the cave.