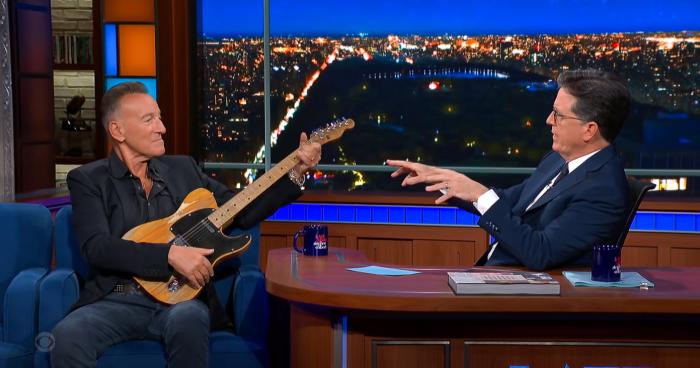 Bruce Springsteen is an OG Social Justice Warrior and goddamn national treasure. Over nearly half a century of musical struggles and stardom, he has remained a staunch ally of the working man, unions, racial diversity, LGBTQ marriage and acceptance, a woman’s right to choose, environmental protection, and immigrant rights. He campaigns for Democratic nominees, canceled a show in Greensboro to protest North Carolina’s bathroom law, and generally disproves the adage that wealth and age automatically make you conservative. He’s spoken openly about his struggles with depression and mental health. He’s sold over 135 million albums worldwide and won Grammys, Golden Globes, an Academy Award, and a Tony. At 72, he still performs live for hours, writes poetic odes to America’s past and potential, and generally makes me feel like a lazy slob. In 2002 he released The Rising, an album inspired by the 9/11 attack and yet full of hope, never once indulging in the Islamophobia and xenophobia that turned so many of his contemporaries into raging lunatics. Ted Nugent, Toby Keith, and their ilk aren’t fit to clean Springsteen’s boots, though to be fair, they’re much too busy licking Trump’s.

On Monday night Bruce joined Stephen Colbert on The Late Show to discuss politics, working with Barack Obama, the release of The Legendary 1979 No Nukes Concerts film and live album with performances from Springsteen & The E Street Band for the 1980 No Nukes documentary, and the struggle to remain optimistic in an era of fear. Watching Stephen fanboy all over Bruce is pretty adorable. Bruce also made me resent how good he looks for being more than 30 years my senior, but I’m not sure that was intentional.

"You have to be a fighting optimist." - @springsteen on staying hopeful about democracy. #LSSC https://t.co/5kaDOhniYi pic.twitter.com/YuM4U4eMt7

If you are a Paramount+ customer you can view the entire episode, but it’s also available in chunks on YouTube, so I’ll let the man speak for himself.

He also performed a great acoustic version of “The River.”

← This Week on Podjiba: 'Succession', 'Invasion', and More! | 'The Daily Show' Has Everything You Need To Know About Kyrsten Sinema →