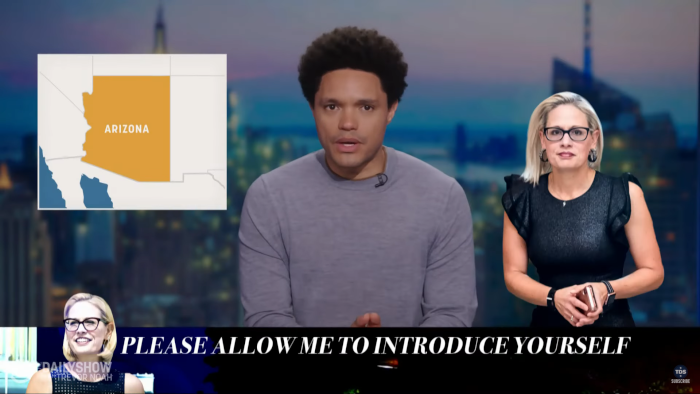 “A George, divided against itself, cannot stand!” That Seinfeld quote pretty much sums up the current state of the Democratic Party. Sadly, it’s not even fully divided. There are merely two people within the Democratic party who are mucking things up. First, we have Joe Manchin from West Virginia. It’s pretty clear where his interests lie. Then, you have Arizona Senator Kyrsten Sinema. She remains a bit more of an anomaly, which Trevor Noah at The Daily Show recently discussed.

Sinema started as an activist, once courted “Feminist Witches,” and supported immigrants’ rights. She was everything you’d want from a far-left representative. Unfortunately, all of that changed as she climbed the political ladder. Any values she claimed to have had have seemingly gone out the window. It’s the worst kind of betrayal. The kind that would make you follow someone you voted for into the bathroom just to get them to answer one question: Why?

That’s one of the worst aspects of Sinema. Her reasons for this shift are unknown. People have theories. Also, Sinema isn’t known for being very subtle. Just last month she attended a fundraiser with five business lobbying groups that strongly oppose the Democrats’ current bill. She’s taking money from people who oppose her party’s agenda. Think about that. Not only is that an incredible betrayal but it’s also so frigging rudimentary. She wants more money. Plain and simple.

Now the Democratic Party is held hostage by her and Manchin’s selfish demands. Things are bending a little. There is a light at the end of the tunnel, but that tunnel is lined with compromises. How can we make any real change in this country? The only person who can answer that question is Kyrsten Sinema, and she’s not tipping her frilled cap anytime soon.