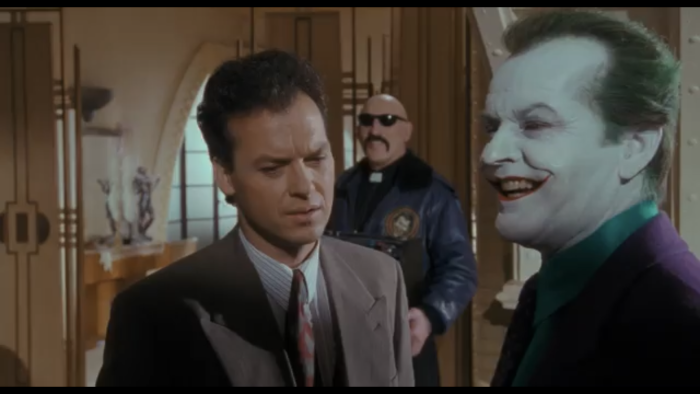 Let's Talk About Batman And The Joker's Best Onscreen Interactions

God versus the Devil! Dogs versus Cats! The Noid versus all manner of Pizza! Some rivalries are built to last and echo throughout the cosmos like the scream of a certain dying Kryptonian. They capture our attention in a way that makes it impossible to look away. They don’t end, they merely lie dormant, waiting to be reignited. A feud that I have been watching unfold for as long as I have been alive is that of Batman and the Joker.

Between a worn-out tape of the 1989 Batman film and episodes of Batman the Animated Series and the 1966 Batman show, I had my fill of the Caped Crusader going against the Clown Prince of Crime from a very young age. Over the years I’ve seen that feud play out over more comics and movies and shows. It is ingrained in my subconscious.

However, the question remains, of their epic on-screen showdowns, which is the best? I’ve narrowed it down to five picks that I think are just the tops.

It goes without saying but SPOILERS AHEAD for 50 plus years of media, including some more… recent releases.

Also! While I won’t be discussing the comics here, there are some great books just BEGGING to be read by you. I could recommend so many, but Scott Snyder and Gregg Capullo’s “Death of the Family” and “Endgame” storylines from their New 52 run on Batman are phenomenal Joker/Batman stories that get to the heart of the duo’s “relationship.”

Some of my earliest memories of Batman are thanks to the 1966 television show starring Adam West. Throughout my life, I’ve gone back and forth between hot and cold on the show. As a child, I loved it. As a grumpy teen, I lamented its silliness. As an adult man, I can’t wait to show it to my kids. No matter my age, I’ve always enjoyed Cesar Romero’s performance as the Joker (mustache and all) and how it makes West’s Batman even better.

While not always successful, this Batman show was satirical in nature. It took the big, crazy, silly comics of the time and put them on camera, warts and all. Because of this, Romero’s Joker is big and silly and over the top. Meanwhile, West’s Batman is stiff and bland and incredibly Boyscout-esque. That makes this particular showdown between the two both fun and effective! Batman is a total square and what’s the biggest, insurmountable challenge you could present to such an L-Seven Weenie? A surf contest!

It’s the ridiculousness of the act mixed with the unwavering seriousness of the onlooking crowd that makes this scene really sing. It encapsulates not only the tone of the show but the never-ending struggle between the two enemies. If I want to explain what was bad and great about the show, I can point to this scene. It only makes sense that a moment that sums up a show would feature its greatest rivalry.

Y’all, I loved Zack Snyder’s Justice League. It is a big, sweeping, epic story worthy of the team and also an artistic endeavor so anomalous it may never be replicated. However, the nightmare sequence of the epilogue feels, to put it mildly, out of place. Which makes sense. Snyder shot the scenes back in October, years after he’d shot the rest of the film. That said, the scene feels very much like his last big swing. A director, who may never return to a property he once had grand plans for, being allowed to add one final wrinkle. It has all the trappings of a “bucket list” moment, especially the interaction between Ben Affleck’s Batman and Jared Leto’s Joker.

In another world, we may have gotten a whole movie starring these two actors, neither of whom were readily accepted upon announcement of their casting. Instead, we are left with a brief interaction that features Joker taunting and dissecting Batman, and Bats responding by promising to, one day, “f*cking kill [him].” It is very Snyder but also very Batman and Joker. While the scene may not fit well into the film, what it presents, an idea that even in a post-apocalyptic Earth the two are still at each other’s throats, forced to work together (for some reason) paints a wonderful picture of their never-ending struggle.

If anything, I just wish Leto’s Joker was less Heath Ledger in this scene and more of the flamboyant gangster/poisonous social media influencer that we were promised! He wants you to hate the “Damaged” tattoo!! Think about it: Batman, in a world ravaged by Darkseid, stuck with a Joker clad in big, extravagant outfits and those gold teeth?? Now that is a nightmare.

This one is a little bit of a cheat. “But, Andrew, that’s Bruce Wayne and Joker” you could say, and I acknowledge that. However! It still friggin’ works. Michael Keaton’s Batman and Bruce Wayne are one and the same in a way that no actor has really achieved since. Sometimes you get a good Bruce, like Clooney. No one would ever think that guy is Batman! Sometimes you get a good Batman, like Kilmer. Everyone who meets his version of Bruce should be asking that guy if he’s Batman! I believe Affleck and Bale are great at making them two separate characters. Keaton, somehow, merged the two. You wouldn’t think they’re the same guy, but they are. It’s a remarkable balance.

Here we see a batty (I’m heating up) Bruce Wayne going toe to toe with the Joker with more of an intimidation tactic. It’s Batman trying to match Joker’s energy in a way that puts the attention on him and off the imperiled Vicky Vale. My favorite part is that it intrigues Nicholson’s Joker so much. He seems thoroughly amused by the rich man’s actions and then ends them without a second thought. So much about these two characters is on display here and a punch is never even thrown!

It was difficult to not put this scene at number one. Like the movie I plucked it from, it is incredible. The actors involved make it even better. Christian Bale and Heath Ledger play each of their roles with such razor-edged efficiency that it’s easy to get lost in the moment and feel you are just watching these two characters interact in their purest form.

The Joker, pushing Batman to the very edge, cackling as he gets a rise out of him. Batman, pushing back, still not willing to go as far as the Joker wants.

This movie catalogs the first meetings of these interpretations and yet you can feel their whole history at play. Everything that makes both of them great is on display here. When Ledger’s Joker says to Bale’s Batman “you complete me,” it shows a chilling understanding of the character that few have ever been able to achieve. They are two sides of the same coin, something Batman often refuses to admit but that the Joker absolutely revels in.

My number one. I wasn’t sure, when going into this list, that this scene would be at the top, but here we are. It has everything that makes a good Batman/Joker interaction. Everything. Emotional resonance, danger, understanding, manipulation, and most importantly, an “end”. Here we see a Bruce Wayne and Joker, who have fought for years, come to blows for the last time. It ends with one of their deaths and yet it leaves a mark that haunts everyone involved for the rest of their lives. Even when it’s “over” their fight isn’t “over”.

Mark Hamill voiced the Joker for over twenty years and he had many great moments with Kevin Conroy’s Batman (including some wonderful video games) but this scene says it all. It captures the menace and danger that Joker is capable of while also getting to the heart of Batman’s struggle with him. He’s so terrified of sinking to his enemy’s level that it cripples him in a moment where he’s primed for revenge, leaving the Joker to take advantage as he always does. It takes a “Jokerized” Robin to do what Batman isn’t capable of and he is forever changed because of it.

This is their never-ending battle, summed up perfectly in four minutes.

There you have it! I’ve been a comics fan for long enough to know I’ve likely left out someone’s favorite Batman/Joker moment. I also believe that, eventually, we’ll be given new ones that I’ll want to add to this list. That’s the great thing about endless feuds: they never end!

That said, if you have a favorite moment I missed, add it in the comments, tweet it out, share it with the world. All I ask is that you don’t rag on someone else’s favorite if they do decide to share it. We live in a society (I’m on fire!) where so many versions exist that we can all have our favorites! Let’s celebrate that.


← What's Going on With David Dobrik, YouTube Star Facing Accusations of Misconduct and Toxic Behavior? | Disney Drops Releases For 'Black Widow,' 'Cruella,' 'Luca' And More, Plus: What's Up With 'Death On The Nile'? →