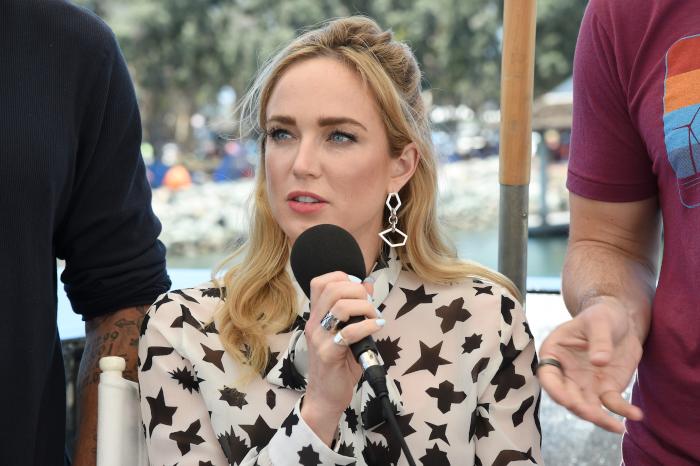 'Legends of Tomorrow's Caity Lotz Loves Trump Supporters and Thinks You Should, Too

To quote Maya Angelou: “When someone tells you who they are, believe them the first time.”

Like so many of her fellow Arrowverse stars these last few months, Caity Lotz has been stirring up some trouble. I shouldn’t be surprised because she’s been showing us who she was for a while now. A white feminist (I use the word feminist here very loosely) who is high on the “why can’t we all just love each other” bullsh*t that is indicative of her privilege. Over the weekend, she tweeted something so incomparably ignorant and her message was crystal clear: people should love their oppressors and hey, even Trump voters deserve love, not hate (despite the fact that hate is ingrained in their ideology).

Lotz’s goal, in her own words, was to bridge the divide between Biden and Trump voters because it hurt her heart to see how far things have spiraled. She then proceeded to act as if kissing and making up would suddenly solve the dilemma. She played the both sides card and actually defended her la la la, love will save us all crap with the education level of a five-year-old and pushed her white privilege so hard that she wound up playing the victim. Lotz, it seems, has been wearing rose-colored glasses and living under a rock. She even used a quote by the late, great Ruth Bader Ginsburg in her tweet (which was meant to honor her) and wound up misunderstanding all that she stood and fought for in her time on this Earth.

But, let’s backtrack first. Lotz, who plays the bisexual Sara Lance on The CW’s Legends of Tomorrow, has a history when it comes to flaunting her ignorance and white privilege (two things that so often go hand-in-hand). In late 2017, she co-founded SheThority with The Flash’s Candice Patton, a digital space that was meant to celebrate, educate, and discuss the experiences of women from all backgrounds. Things were going well for some time, but it quickly became clear that Patton, who vouched for intersectional feminism, and Lotz, who increasingly flaunted her white feminist flag, were not on the same page.

The Instagram page (which I’m convinced Lotz ran) turned into empty platitudes about girl power. When it came to listening to Black and Brown women about anything (including white feminism and the erasure of Patton’s role in the organization), Lotz’s response was to get defensive and stuck a “why can’t we all just get along?” and “let’s all stop tearing each other down” band-aid on top and called it a day. I’ve been following SheThority’s social media accounts for some time and it’s indeed become a space where only white women can share anything in safety, thus alienating and silencing Black women and other women of color.
At a convention, Lotz used the term d*ke, which is still considered derogatory and, when she was called out for it, she said that she didn’t know it was offensive but didn’t apologize. Later, she claimed her character was being “gaywashed” for consistently being with women instead of men, and told former co-star Maisie Richardson-Sellers that she was too girly to play a gay character and that she would teach her how to play one. This reinforced stereotypes about how gay people should act and Lotz said this while knowing Richardson-Sellers is a member of the LGBTQ+ community in real life (while Lotz is not).

Then, shortly after the news of RBG’s death broke, Lotz opened her damn mouth when she should’ve just kept it shut. Here’s exactly what she wrote on Twitter:

Not to mention the fact that she changed her header to include the American flag with “KKK” written among the words. When she was called out for posting it, she claimed she didn’t realize it was there and deleted, but the damage was done. 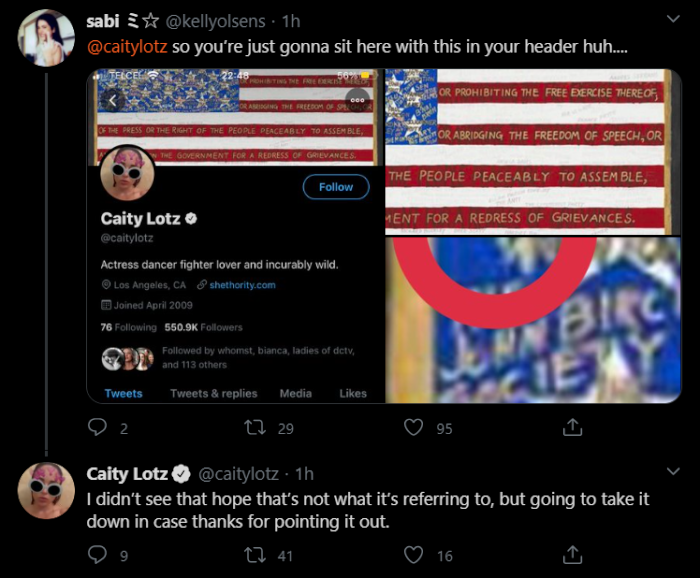 The sheer amount of stupidity would be impressive if it wasn’t a part of a pattern. How easy it is for Lotz to sit there on her high horse and tell people that they should love those who hate them. When confronted with what she’d tweeted, she doubled down and asked one person to go and find Trump supporters and see if they did indeed hate underrepresented groups. Seriously? Did the white supremacist rally at Charlottesville not paint a clear enough picture? Have the last few months alone not painted that picture? What more evidence does Lotz want? And how was her tweet meant to honor RBG? All it did was confirm that her feminism, her perceived allyship of the LGBTQ community, and her (blink and you’ll miss it) support of BLM are all performative. She just doesn’t get it, nor does she want to, and has nothing remotely meaningful to say about anything important. 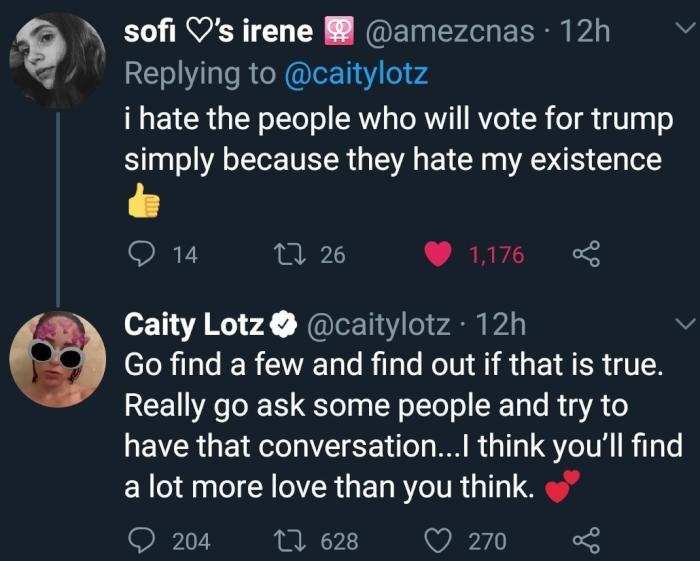 And you know it’s bad when her Arrowverse and CW colleagues replied to her, dumbfounded that she’d said such a thing. One Batwoman writer subtweeted her multiple times and Lotz’s use of the #RIPRBG hashtag led her to be dragged by several outside the fandom circle. Many wondered how she could tweet such a thing when Trump and the Republican party have been working to strip the rights of women and the LGBTQ community away for years. Brown children are in cages, Black people are still facing violence, and there’s a pandemic that could’ve been avoided altogether if the president actually cared about anyone but himself or his racist, sexist, and bigoted base. And yet Lotz wants to love his supporters?? It’s unfathomable how negligent her tweet was.

The chasm can’t be closed so long as Trump and his supporters wish to strip away the human rights of others. Just because Lotz can’t stand the division, she’d like people to just shut up, love each other, and ignore their mistreatment instead of actually working to combat it. What an ally she is! How lost we all were without her wisdom! Love your local racists and sexists, that’s the answer, kids! Lotz later deleted her tweet and, instead of staying off of social media, she tweeted the next morning to explain her reasoning and didn’t even apologize. Perhaps instead of taking to social media to prove her ignorance next time, she’d be better off reading a book and educating herself on the history of her own country. 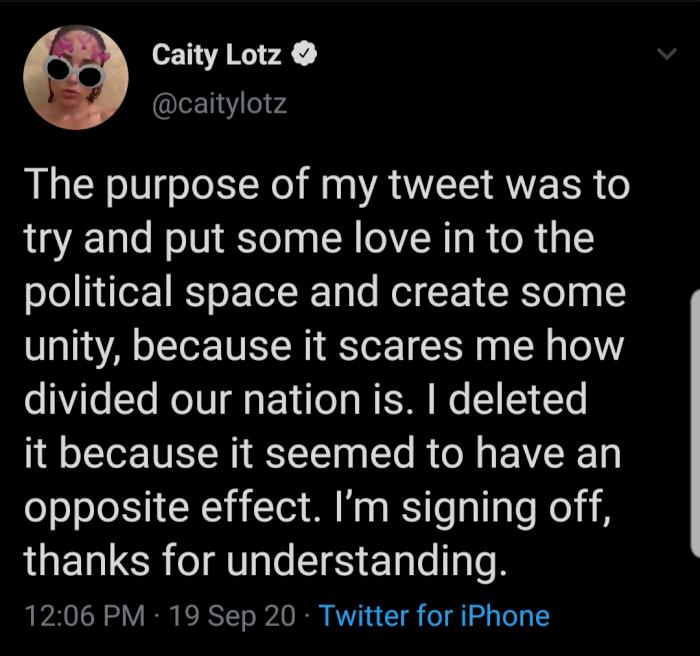 ← Twitter Users Ponder Their Dream Director-Actor Collaboration | Following TIFF, What Does Oscar Season Look Like During a Pandemic? →