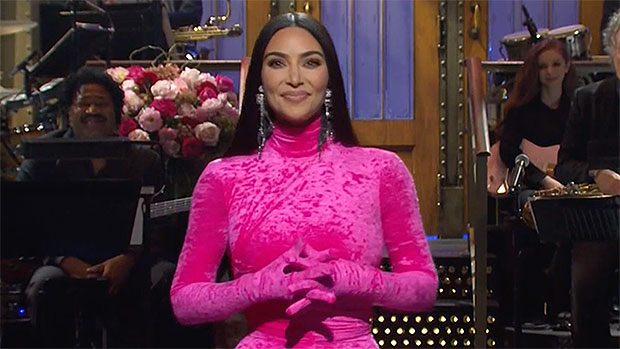 All in all, it was a very bad episode of SNL, but I’ll give Kim Kardashian this: She was game, and she was open to making fun of herself and her family a lot. Unfortunately, outside of the monologue, even making fun of herself didn’t translate to decent comedy. I genuinely know very little about Kim Kardashian — this was the most exposure I’ve ever had to her — but I’ll say this: I didn’t dislike her. She was, however, a bad host of SNL.

Cold Open — The Cold Open takes up the Senate hearing with Facebook whistleblower Frances Heugen, and you knew exactly how it would go before it started: The Senators would show their ignorance of technology and social media. In that regard, the sketch is both predictable and does not disappoint (Aidy Bryant as Ted Cruz!). The new guy also does a really weird, skeevy Lindsey Graham impression (which must mean Kate McKinnon isn’t on again tonight). Pete Davidson makes an appearance as Tom from MySpace, too! (Score: 6.5 out of 10)

Kim Kardashian West — Well, I’m sure she’ll bring in ratings. Actually, the monologue is pretty decent — she burns the hell out of her family and Kanye, and damnit, Kim Kardashian may have won me over for the moment. (Score: 6.5 out of 10)

Aladdin — Pete Davidson plays Alladin and Kim Kardashian plays Jasmine, and Alladin is afraid of having sex because Jasmine is too much woman for him. So, he uses his third wish to give himself a bigger penis. This is more of what I expected tonight. (Watch Here) (Score: 1.5 out of 10)

Grown Ass Women in the Club — A song about a group of women in their 30s and 40s going to the club for a ladies night, and you know exactly how it’s going go to go (they’re tired, their feet hurt, they’re puking, etc.). It’s funny because it’s true, but it’s not that funny. (Score: 5.5 out of 10)

The Dream Guy — It’s a Bachelor parody with several real celebrity cameos (John Cena, Jesse Williams, Amy Schumer, Chris Rock, two people I do not know), and also a dweeb played by Kyle Mooney. It comes down to Cena and the dweeb. It’s a meager skit for so much star power. (Watch Here) (Score: 3.5 out of 10)

The Switch — In a prerecorded video, Kim Kardashian and Aidy Bryant switch places for one day (but importantly, do not switch bodies). Kim’s mom and sister, Khloe, also appear. Another really bad sketch that’s not helped by the fact that the Kardashians cannot actually act. (Watch Here) (Score: 3 out of 10)

Channel 7 News — Kardashian plays Shonda, the person who selects the Powerball numbers, and the joke in this sketch is that the lottery balls are like meatballs and blank balls and letters and random items. It’s a really stupid sketch, but somehow hilarious in its increasing stupidity. It gets a very generous (7 out of 10), and it’s also the Mat sketch of the week.

Weekend Update — Can “Update” save SNL? No, tonight’s episode is too bad to salvage. But Jost and Che are solid. Their movie critic takes LSD and reviews Paw Patrol and Venom and it is sublimely funny. There’s also life coach Kelly Party, and her entire schtick is playing the same pop song, “I don’t care, I love it.” Watch that one here if you must, but the rest is not worth watching. (Score: 7 out of 10)

The People’s Kourt — Kim plays her sister, Kourtney, a judge who settles disputes between her family members. Her mom and Khloe are in this one, too. It’s absolute crap. Not even Keenan’s O.J. can save it. (Watch here) (Score: 1.5 out of 10)

SNL Writing Night — What the hell was that? Those aren’t even cast members? I almost fast-forwarded through it because I thought it was a real ad. But it’s a sketch for Desk Seltzer? WTF? What am I missing? I feel like I’m just not getting the joke, maybe? I’m embedding it so someone can explain it to me. (Score: 2 out to 10)

Skims Shapewear for Thick Dogs — An ad for Kim’s line of shapewear, only for dogs. Yikes. (Watch Here) (Score: 2 out of 10)


← What Are the Burari Deaths? Netflix's True Crime Series 'House of Secrets' Explained | 'Psych 3: This Is Gus' Trailer: Get Ready to Suck It with Shawn and Gus →