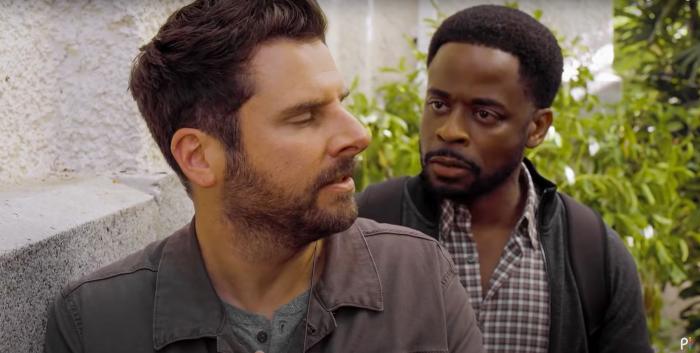 'Psych 3: This Is Gus' Trailer: Get Ready to Suck It with Shawn and Gus

As previously discussed, I love Psych. It’s the best show about a fake psychic detective ever made. The character dynamics and low stakes make for the perfect 43-minute escape. I’m currently on season 6 of my latest rewatch, and it remains strong as ever. At the end of last year’s Psych 2: Lassie Come Home, we were promised a third movie focused on Gus’s upcoming marriage to his longtime girlfriend Selene (Jaszmyn Simon), and the birth of their first child. Unfortunately for the happy couple, it turns out Selene isn’t really Selene. Also, she’s already married to someone else. Gus and Shawn must solve the mystery before her water breaks or the baby legally belongs to her ex (Ed. note: Probably not true). At the same time, Chief Carlton Lassiter returns to the Santa Barbara Police Dept. after his shooting and subsequent stroke. The trailer and premiere date dropped this weekend at the NYCC.

It’s got everything. The whole cast. Bad puns. Pop culture references. A radiant Maggie Lawson. Timothy Omundson looking like he belongs on currency. Senior citizen Corbin Bernsen, which I find a deeply uncomfortable reminder of the passage of time. Woody on FaceTime, no doubt in a non-extradition country. Karen Vick and Buzz! What else could you ask for?

Psych 3: This is Gus premieres on November 18. It looks like the perfect thing to (re)watch as you digest that Thanksgiving meal.

← Kim Kardashian West Is Both Better and Worse Than You Expect as Host of 'SNL' | 5 Shows After Dark: 'Evil' Second Season Finale, 'Legends of the Hidden Temple' Series Premiere The CW →