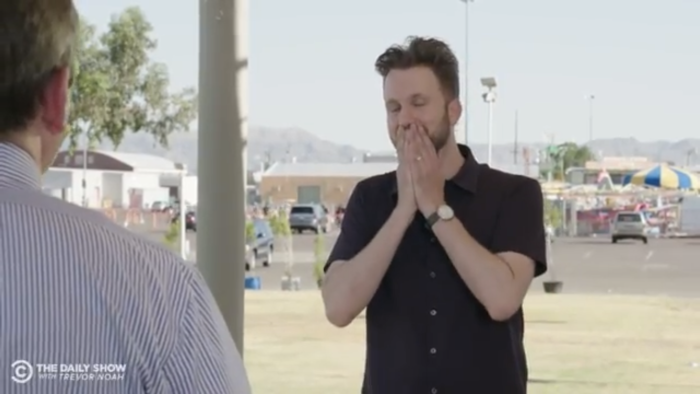 A recount is underway in Maricopa County. For the 2020 election. Seriously. You may be thinking “wasn’t there already an audit of those votes?” Yes, there was! The problem is, that audit was thorough, done by a bipartisan firm, and didn’t check for bamboo. So, ya know … *starts crying*.

The situation has been covered heavily in the Late Night scene. However, no one from the talk show circuit has gone to the recount itself. That’s where Daily Show correspondent and Man Doomed To Spend The Rest Of His Life Talking To Human Don’t Tread On Me Flags Jordan Klepper comes in.

Klepper has covered the Trump campaign for years, dealing with insults, insanity, and insurrection. This was the first time where I feel he was truly frustrated. It isn’t even a Trump supporter he is frustrated with. It’s the people in charge of the recount! They’re giving weight to bonkers conspiracy theories, and they don’t appear to like being called out about it.

Audit volunteer John Brakey claims that they are there to disprove theories. He refers to them as “Mythbusters.” He goes on to say that this situation is “not a joke. The lack of awareness is stunning. One of the things they’re attempting to “Mythbust” is bamboo-laden ballots flown in from China. A totally real and not at all racist concern. They think by addressing that concern and disproving it, they will change believers’ minds. OK, John.

If anything, this will likely embolden all the wrong people. Even if the recount shows what we already know, there’s a built-in scapegoat. In the end, and I don’t say this lightly, the most bananas revelation of Klepper’s piece is that the audit is being conducted by a company called Cyber Ninja. Apparently, the recount will also have to take a week-long break at one point to allow for graduation ceremonies to take place. Yup. The same people who once complained that closing for the night was suspicious will now have a whole week to complain if things don’t go their way.

It’s hard to see this recount as anything but disruptive and dangerous. Klepper is told several times that this is all not a joke, and it’s not. It is incredibly absurd. Laughing at it is about all we can currently do.