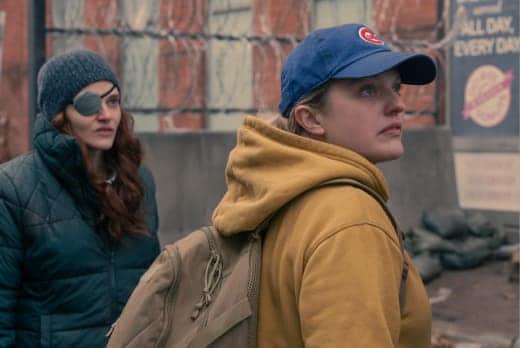 Previously, on The Handmaid’s Tale: June and Janine made their way to Chicago and joined an armed group of American survivors, only to find there are plenty of douchebags outside Gilead too. On the sliding scale of places, Chicago ranks slightly above Gilead — congratulations! You’re free…to starve to death or be blown up — but Canada’s still winning by a country mile. (Was this show sponsored by Canada?) Serena tried to manipulate Rita into being her Canadian Bestie, but Rita saw through her, and told Fred that he’s going to be a dad. Here’s my recap for episode 4 if you missed it!

This week: It’s all about picking teams! June finds out that life as a rebel isn’t as murdery as she would like, and Janine has to make a difficult choice. Commander Lawrence and Aunt Lydia are in cahoots. And brace yourself: NICK DOES SOMETHING! Of course, he immediately regrets it and then looks really conflicted. Spoilers for episode 5 are ahead!

Was there ever anyone who could make the best of it like Janine? She’s decided to view her situation as ‘object of use’ to Chief Rebel Douchebag as a relationship of sorts, one that gives her some status in the group. In contrast, June finds herself in the role of ‘flunky who doesn’t know her place’, and it’s a come-down from Red Leader. She’s mesmerised by the fighting outside, by the violence itself and what it represents. Last week, I said that she wants to hurt someone, anyone, who represents Gilead, and that urge to hurt is just getting more and more intense. There have been a few moments this season where I’ve wondered if June’s developing arc is what Benioff and Weiss meant to do with Daenerys in Game of Thrones: take the white saviour lady and show her desire to liberate and be a hero slowly turn into a bloodthirsty rage, daring the audience to see how long they cheer her on before starting to feel uneasy. This show, however, takes its time with characterisation, cares about making emotional beats make sense, and pits its protagonist firmly against Dystopian Hell. She might just be trying to trade up from this band of rebels to some better ones. Or she might just hate being outranked by Janine. But it is also plausible that June will go full-on Blessed Be The Dracarys soon, and that we won’t be fully sure how we feel about it — and that’s interesting.

When the group comes across the charred remains of Gileadean Angels, Janine is grossed out, but June? Hmmm…

June: Who did this?

Chief Rebel Douchebag: Nighthawks. They don’t care if they live or die, they just wanna kill soldiers. You’d love them.

He’s figured her out fast, huh? And now I am in the grumpy position of having to re-name Chief Rebel Douchebag. He did a very bad thing last week. But he’s also not entirely wrong now; he has to play Stern Dad with June, with his damn logic and caution. Ugh. ‘No murdering for you! Go to your room!’ ‘OMG that’s so unfair!’ So I guess I will just call him Steven. Fine. Give people layers to ruin my nicknames, why don’t you? And now Janine wants to buy him a present?

June wants to get away from Steven’s camp and find the BURNY BURNY people, while Janine is less keen. This is fine, she reasons. There is much worse out there. There’s potential happiness here, and she knows there are risks with following June, who cruelly calls her Ofsteven when they row about it. DON’T BE MEAN TO JANINE! HOW MANY TIMES MUST I SAY IT? YOU WILL REGRET IT!

It’s tears and hugs the next morning when they say goodbye. Because Janine is a poppet, she gives June the cap meant for Steven, and sends her off with a wave. More on that story later…

Aunt Lydia’s recuperating from her latest run-in with Handmaids who violently hate her guts, and she’s at risk of being retired — which might mean just losing status, or it might mean a quiet one-way trip to the Colonies. She sizes up her replacement, Aunt Ruth, and knows she can take her.

Commander Lawrence is still on the Standy Up side of the conference table at the start of the episode, but the other Commanders need him to a) find the missing Handmaids and b) fix the nation’s PR problem with the ongoing war, because they are clearly useless at both. He proposes a strategic ceasefire, to allow aid missions into Chicago, which would make Gilead look good and get them out of the trade sanctions they are currently under. It’s a hard sell for Commander Club. Nick — and I almost fell off my chair at this — speaks up in support of Lawrence. But Lawrence is still on thin ice. And when none of the other Commanders vote for Lawrence’s idea, Nick falls in line. Thank goodness I didn’t commit to falling off the chair.

Lawrence has tried to sell this strategy as a way for Gilead to prosper economically; I’m 99 per cent sure he’s telling the truth about his motives here, because he wants that comfy chair and the nice house, and proper rebellion’s just too damn messy. He might claim he’s trying to “do the right thing”, but he’s doing a very good impression of someone who’s just telling himself that so that he can sleep at night and keep Nick as a potentially useful ally. So much potential, that Nick. Potentially Useful Nick.

Here to test Lawrence’s motives is Aunt Lydia. Both she and Lawrence are former power players who have found themselves out of favour and don’t like it. How can they be of use to each other? She won’t grass him up for his bad behaviour, if he helps her get fully reinstated. It’s a new play from Lydia; ever the party woman, she’s played things by the book until now, as far as we can tell. This weaponising of intel is something we saw in The Testaments, so I viewed this exchange with some glee. Lawrence wants more; his aim is still to be on the Sitty Down side of the Commander Club table, and her gossip dossiers could remove some obstacles. In exchange, she wants to be in charge of punishing June when Gilead gets her back. Deal. And the glee’s replaced with a shudder; these two are scary together.

Before you can say “blessed be the fruit”, Lydia’s back in charge at the Red Center, training the new class of Handmaids how to walk slowly in circles.

“Your bond with each other will be strong. From this day on, none of you will ever walk alone again.”

Those words echo all the way back over to Chicago, where Janine has changed her mind: she’s opted for sisters before misters! Huzzah! She leaves Steven, and goes off with June.

Poor Nick. This was his time to shine! He’s psyched himself up, and decided to DO SOMETHING. He boldly announces that he wants to back Lawrence’s ceasefire plan, no matter what it takes, because now he’s fairly sure June’s in Chicago, he’s not that keen on blowing it up. I’m balancing precariously on the edge of my chair again… GO, NICK, GO! But what’s that? Lawrence isn’t just on the Sitty Down side, he’s in the middle! He’s like the King of the Long Impractical Table, just waiting for an opportune moment to Lean In and Flex. And he’s made a few teensy amendments to that plan…

That’s when Nick finds out he’s just thrown his full support behind a psychopath. Lawrence’s new plan is to pretend to call a ceasefire, wait until international aid arrives and the good folks of Chicago come out of hiding, then, uh, bomb the crap out of everyone and mwahaha over cigars in Conference Room B. It’s a plan with real Hunger Games vibes. Lawrence needs to look Large and In Charge now he is King of the Table, you see. Wasn’t his justification for the ceasefire something to do with economics and trade sanctions? Doesn’t matter. Roll with it. Chicago’s gonna go boom.

Yeah, Nick probably shouldn’t have done anything. Do I need to change his nickname from Nearly Pointless Nick to Accidentally Genocidal Nick? He’s never going to do anything ever again, is he? Sigh.

In fact, Nick’s probably not the only one regretting being on Team June. Incoming jets interrupt June and Janine’s stroll through the city, spewing forth bombs and obliterating everything in sight. When the dust settles, and June regains consciousness, Janine is nowhere to be found. NOT MY JANINE! NOOOOOOOO! DAMNIT NICK!

For a few horrible moments, June is all alone. But then… Handmaids always walk in pairs. I know there are probably some viewers who found the last few seconds of this episode cheesy and a coincidence too far, but that reveal MADE MY HEART SING, SO THERE. Out of the ash and the horror, a figure emerges, there to save the day. The best possible person. The ever blessed, Queen of Team Awesome. PRAISE HER. Of course Moira is there. DON’T QUESTION IT! Just enjoy the warm fuzzy feeling! Now if you’ll excuse me, I’m off to cry happy tears and eat some ice-cream.

Next time: If anything bad happens to Moira, I will riot.