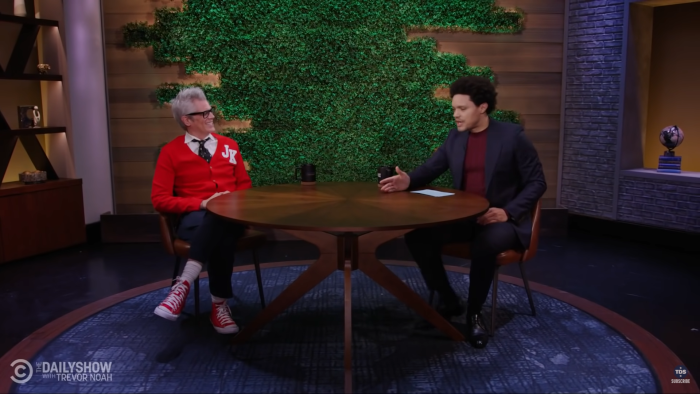 If this weekend’s box office numbers are any indication, people still love to see others hurt themselves for their amusement. Jackass Forever charged to the head of the box office like a bull trying to knock out Johnny Knoxville. I could go on and on about why I think these movies do well, but today I’m here to talk about Knoxville himself. He’s been making the rounds to promote the new film, often reflecting on his many years of stunts. It’s been delightful to watch, and his sitdown with Trevor Noah is magnificent.

Let’s start with the fact that Noah seems genuinely interested in what Knoxville does. Most interviewers are, but Noah even brings up a painful experience of his own, in an attempt to figure out why Knoxville keeps doing this. There’s a fascination, by people who aren’t in the Jackass crew, with why they do what they do. Knoxville is more than happy to explain it, even if that can feel somewhat mundane. It’s old hat to Knoxville at this point.

Knoxville’s casual nature is one of the many things that make this interview so great. At one point, he nonchalantly mentions that, in filming the new movie, he almost swallowed his tongue. Dead air during a talk-show interview is rarely a good thing. However, there is a pause after Knoxville mentions his potential tongue swallowing, which is one is the funniest things I’ve seen in an interview in a long time. It takes a lot to shock Trevor Noah. Knoxville does it effortlessly.

This may be Johnny Knoxville’s last Jackass movie. He’s in his fifties. You can only get beat up for a living for so long. Hopefully, he at least keeps talking about it.


← The Razzie Nominations Have Been Announced, and We Have a Bone to Pick with One | Why Doesn't NBC Want Leslie Jones to Recap the Olympics? →