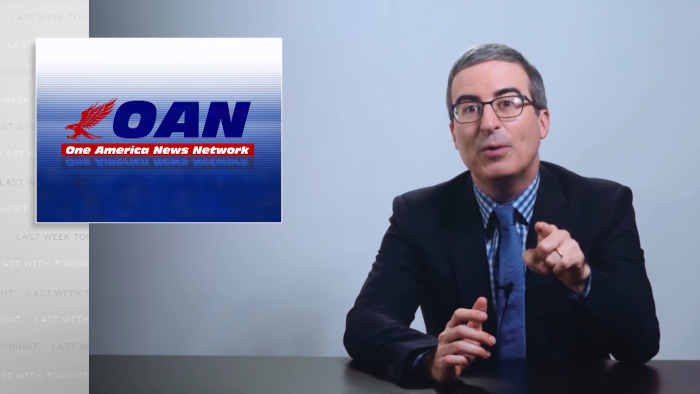 This last week, thanks to Twitter, I was made aware that AT&T had a hand in creating the One America News Network. The ultra-conservative network peddles everything from bulls*** conspiracy theories to bulls*** human beings. I’m looking at you, Sean Spicer. This last week it was revealed by Reuters that the creation of OAN was possible due in part to the support of AT&T. Needless to say, John Oliver was not going to let his “Business Daddy” off easy for the reveal.

Oliver is no stranger to OAN. Just last year, he did a story on the network and how it is straight-up dangerous. It pushes misinformation in a way that would make Tucker Carlson’s nipples hard. However, even Tucker Carlson wouldn’t call for the execution of Americans. (I say that, knowing full well that there’s a chance that has probably happened.)

OANN calling for mass executions, brought to you by @ATT pic.twitter.com/1EIzWHITnm

Oliver has also taken plenty of shots at AT&T. Just last week, I was joking with my wife that it is likely someone at AT&T’s job to explain to a room full of rich, old people why they can’t retaliate when Oliver says something mean. “It will make us seem likable” is something this person I’ve made up probably has to say a lot.

Oliver pulls no punches when it comes to his “Business Daddy” and that was especially true this week. When he was told by AT&T that they respect the “editorial independence” of their shows, “including [his],” he decided to exercise that independence. As the children say, the host “went off.” He made fun of AT&T with such delirious delight as a child opening presents on Christmas morning. He’s never been shy about his feelings for them before, but you can tell he knew he had them dead to rights.

He ended his gleeful condemnation with the following statement: “You’re a terrible company. You do bad things and you make the world worse. Please don’t bother keeping in touch once the merger’s complete. Although that really should not be a problem for you. You’re AT&T, it’s not like your messages will go through anyway.”

You can find the segment in the newest episode of Last Week Tonight with John Oliver on HBO Max and watch his segment about OAN below.