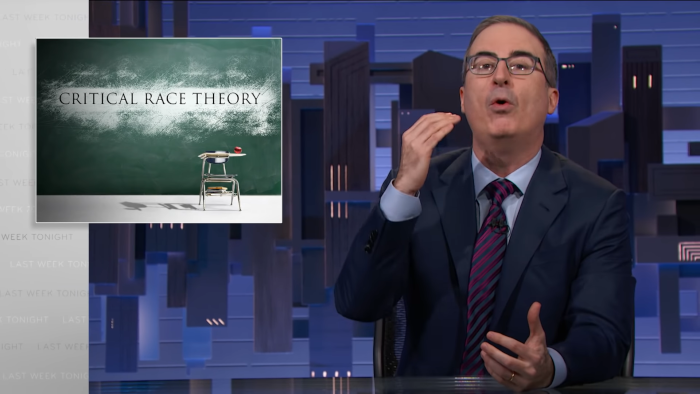 There are some things I look forward to, in large part, because of the surprise. Like, giving new food to my children and waiting to see how they react. Reaching into a box of Cheez-its and wondering if I’ll grab one that is attached to another. Other things that aren’t food-related. I find myself tuning in to Last Week Tonight, and waiting to see what issue John Oliver is going to focus on. It’s always a surprise, even if I suspect something.

This week, Oliver and his show returned from their winter break and jumped right into the deep end with Critical Race Theory. You know, that college-level training that a large swath of supposed “free-thinking patriots” is certain is going to be forced onto their seven-year-old? If you think you’ve heard that term more than you can stomach, you’re not wrong, and John Oliver is here to explain why.

There are “people” who have made it their job this past year and a half to manufacture outrage over Critical Race Theory. They want others to freak out and use the program as a scapegoat for all their fears. The worst part is it’s working, as Oliver explains in the video. It’s no surprise that it’s working. The rabble-rousers and storm crows are preying on guilt and fragile egos.

Oliver came back from his break with a bang. He’s funny, honest, and does not mince words. The question now is: Will the right people listen to him?