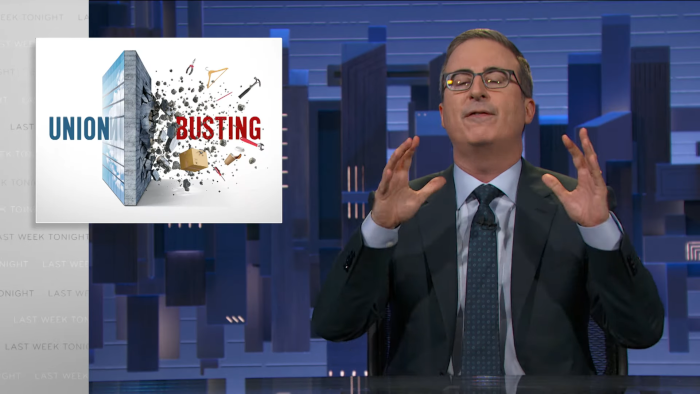 Unions are important. Without them, companies would treat their employees the same way a child treats a new goldfish. They’ll forget it exists until it suddenly dies. I have worked several non-union jobs in my life, and none of them were ideal. I was not allowed a proper separation of work and home life, I was never properly compensated, and my job security was consistently threatened, even when I was excelling at my work. When I’ve worked Union jobs, it’s been the exact opposite. Unfortunately, as John Oliver discussed in the season finale of Last Week Tonight, most companies don’t like Unions and will do whatever they can to keep them away.

It’s not too surprising to be given a detailed report as to why companies hate unions. Even when a company’s employees are unionized there can be bad blood. I was once an HR Manager for a fairly large company. One of my employees was being screwed out of their vacation pay by my bosses. I told that employee to bring the issue to the union. It was resolved, the employee received the pay they deserved, and I was fired. I was given a bullshit reason, despite it being made clear that I made an unpopular decision.

From what John Oliver said, my story is one of the few good ones. Sure, I lost my job but wasn’t unionized at the time. My employee was, and because of that, he was given justice. According to Oliver, only ten percent of American employees are part of a union. That is much too low. But it will likely stay that way if companies like Amazon, Starbucks, and Target keep actively discouraging employees from joining. They’d rather pay Union Busting firms exorbitant prices than give their employees a living wage. In fact, “living wage” was counted among red flag phrases to some companies. It’s a scary phrase that means employees want rights! Spooky!

I’d be remiss if I didn’t mention that I’ve also belonged to some bad unions. It happens. I’ve seen full-on union corruption firsthand. Money was poorly allocated or outright stolen. Even in those instances, it was still better to belong to a union. They just make things safer. No matter what Jeff Bezos may want you to think.

← Is Accused Abuser Shia LaBeouf About to Become a Father? | 'Dexter: New Blood' Episode 2: Who Is Iris? →