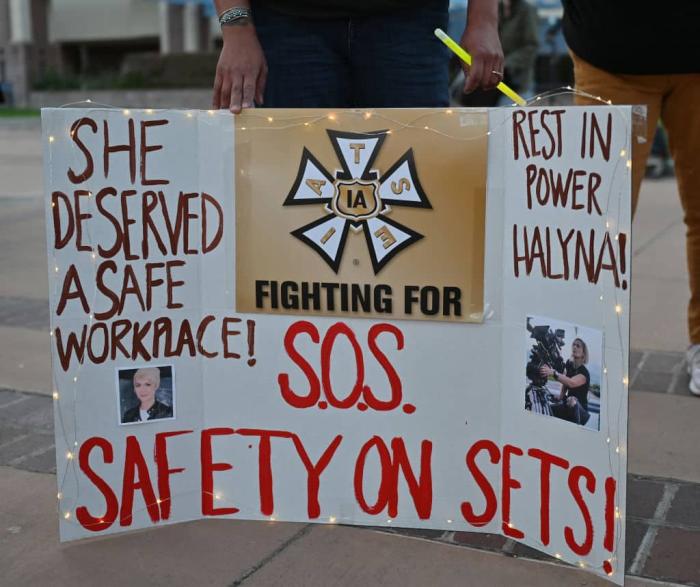 The producers of the film Rust announced that they are suspending production while local sheriffs investigate the circumstances surrounding the death of Halyna Hutchins, a cinematographer who was killed when a gun being handled by actor Alec Baldwin discharged.

The Santa Fe Sheriff’s search warrant, executed Friday, indicated the deputy arriving at the scene was told that the assistant director, Dave Halls, did not know that there was a live round in the gun. Baldwin had been told it was a ‘cold’ or unloaded gun during rehearsals. The shot that killed Hutchins was fired as Baldwin was practicing drawing his gun.

The production company behind the film released a statement (via Variety):

‘As we go through this crisis, we have made the decision to wrap the set at least until the investigations are complete […] we are limited in our ability to say anything further publicly or privately […] Our hearts are with all of you, as we all go through this tragic time and mourn the loss of our colleague and dear friend, Halyna Hutchins.’

The production team said that it had arranged in-person and virtual grief counselors for cast and crew members. Producers also revealed that they will be making a donation to the newly founded AFI Halyna Hutchins Scholarship Fund, which will support women in the cinematography field.

The production company said it is also conducting an internal review, as is the New Mexico Occupational Health and Safety Bureau. According to sources via TMZ, the gun involved had previously been used by crew members, off-set, for target practice, using live rounds.

The chief electrician on the set of Rust took to Facebook to publicly blame the film’s armorer and producers for the ‘negligence.’

And the DEATH OF THE HUMAN IS THE RESULT!

A vigil for Halyna Hutchins took place in Albuquerque over the weekend and was attended by various industry figures. Other gatherings of mourners have taken place across America.

I’m here in Burbank outside IATSE Local 80 where hundreds are gathered for a candlelight vigil for Halyna Hutchins, a few days after she was fatally shot on the set of Rust. pic.twitter.com/7AuM5p1jGh

In Burbank at @IATSE Local 80: a candlelight vigil for Cinematographer Halyna Hutchins after her tragic death on set for the film Rust. There were multiple prop gun safety mishaps & the camera team already quit in protest prior to Hutchins being accidentally shot by Alec Baldwin. pic.twitter.com/ShXBEsRVtD