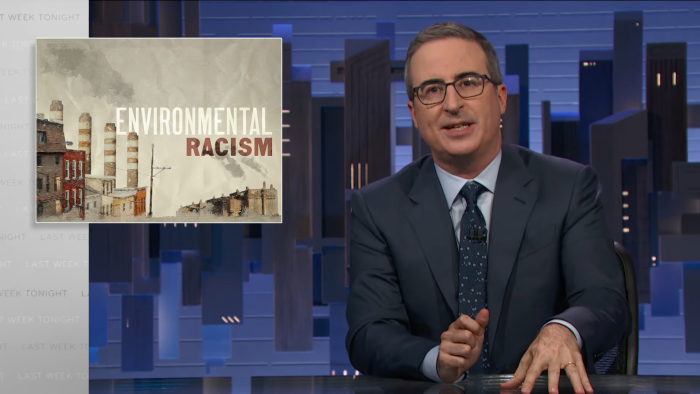 Watching Last Week Tonight with John Oliver provides viewers with an interesting opportunity. It is an opportunity that I try to take full advantage of. Oliver usually spends the majority of the show diving into one topic. Usually, that topic is well researched and depressing as f***. Now and then, you may get something a bit more light-hearted. It is, after all, a comedy show. But more often than not he highlights an issue that deserves your attention and is, to say the least, dire. This week was no exception.

Oliver focused his recent deep dive on racist environmental policies. In short, do you ever wonder where all that industrial waste goes? The answer is: wherever poor Black people live. Companies have gone to great lengths to dump their waste or run their pipelines through areas that present the least amount of resistance. Surprise, those areas are often occupied by poor people of color.

One of the most infuriating things about these practices is how long they have been going on. For example, Oliver cites a case where the government didn’t inform residents that they were surrounded by environmental dangers for over 30 years. They knew this was the case, they just decided not to act. It doesn’t even feel like a cover-up. It feels more like apathy. The people responsible are fine with knowing about, or in some cases, causing these dangers. They know there won’t be pushback so they don’t bother to worry.

Of course, if you ignore the effects of systemic racism, this all seems normal. Why don’t these people just move? Can’t they pull themselves up by their bootstraps? You know, those bullsh*t arguments. This problem has been long-festering, and it likely won’t be fixed anytime soon. Thank you for watching this comedy show. Here are a bunch of pandas.


← Andrew Lloyd Webber's Newest Musical Closes, Much to the Surprise of its Cast | 'Winning Time': Did Spencer Haywood Actually Hire a Hitman to Take Out the Lakers? →