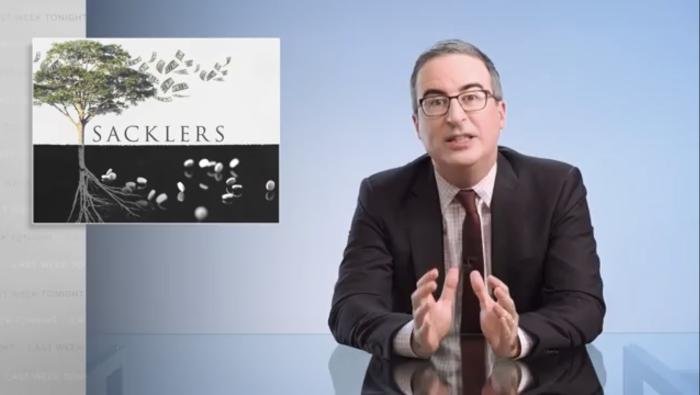 John Oliver Delivers A Kind F-You To The Sackler Family

The Sackler clan, a family of monsters largely responsible for the opioid epidemic in America, are no strangers to John Oliver. He’s discussed them on his show before and, more than likely will do so again. They have made billions off of OxyContin and, ya know, general human suffering. However, they have spent years, and a small fortune, dodging responsibility. They even created a website to defend their innocence. It would be a damn shame if someone made a similar website …

Oliver is known for using his shoestring budget to do some outrageous and, at times, incredibly helpful things. He purchased Russel Crowe’s jockstrap and donated it to a Blockbuster. With $60,000, he forgave $15 million in medical debt. When challenged for making fun of the city of Danbury, Connecticut, he donated $55,000 to local charities when they named a sewage plant after him. He’s literally made a difference in people’s lives. Now, the people HE’S targeting are the Sacklers.

The opioid pushers made a website called judgeforyourselves.info. It is a poorly made site that seeks to shift the blame from the Sackler clan onto … others. It is embarrassingly bare bones. They didn’t even splurge for the “.com” and, well, remember when I said it would be a shame if someone made a similar site? I lied. It wouldn’t be a shame. It would be rad as hell.

You see where I’m going with this.

Oliver purchased the domain judgeforyourselves.com. There you can watch Oliver’s older segments about the Sacklers, as well as read statements from families of victims of the opioid epidemic. You’ll also be greeted by the “real” Richard Sackler, played more palatably by American Treasure Richard Kind. It’s these kinds of stunts that just make Last Week Tonight with John Oliver stand aside from the rest.