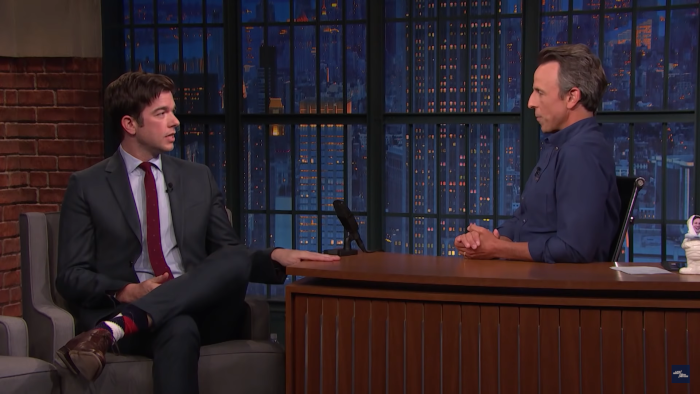 John Mulaney Confirms He And Olivia Munn Are Having A Baby

John Mulaney has had an eventful year. He hosted SNL, he took a job at Late Night with Seth Meyers, and he went to rehab for alcohol and cocaine on two separate occasions. Last night he appeared on Meyers’s show to set the record straight. Since the internet has been abuzz over new pictures of his girlfriend Olivia Munn, he also confirmed that she and he are having a baby.

The interview, running almost twenty minutes long, is incredibly touching. Among the details revealed, is the fact that Meyers was one of several friends who staged an intervention for Mulaney after his first stint in rehab. The two share a genuine connection and friendship from their time at SNL, and the sincerity when discussing the events of last year makes the whole discussion a little easier. As someone who has had family members who are battling demons, I can tell you that none of this is easy.

It’s nice that Mulaney and Meyers can laugh about all of this. Humor has, for me, always worked as a salve in awkward or depressing situations. This interview, despite being about a very serious subject, is loaded with laughs. I don’t want to speak for these two gents, but I hope and assume laughter plays a similar role in their lives.

John Mulaney has always often made his private life public. For better and for worse. A lot of comedians do. At a time when the internet can be on your side one moment and against you the next, Mulaney has come forward to reclaim his own narrative. Will that change people’s ever-changing opinion of him? Yes? No? All I know for sure is that people will likely be talking about this interview for years to come.

← 'The View' Will Take Its Time Replacing Meghan McCain | 'The Matrix 4: Resurrections' Teaser Promises Us John Wick Vs. the Machines →