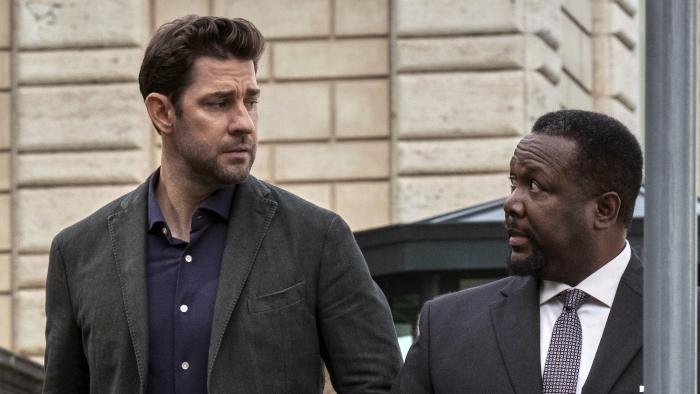 The third season of Amazon Prime’s Jack Ryan careens around Europe and Russia at a breakneck speed from the first episode. The pacing makes it feel like a season of 24. It also feels topical, holding up a distorted mirror to the current, real-world conflict between Russia and Ukraine. Ryan and his team have seven days to uncover what they believe is a plot by Russian hardliners to goad America into a war.

The series continues to move further away from Jack Ryan as the thoughtful, reluctant hero portrayed by Ben Affleck and Harrison Ford in the films from the 1990s. John Krasinski’s Ryan is a CIA Superman. Anyone who doubts his abilities in the field, or his analysis of the situation is either quickly won over, like Betty Gabriel’s steely Chief of Station, Elizabeth Wright. Or they become a nuisance who needs to be worked around, like spiteful, overly bureaucratic, CIA Director Thomas Miller (played by John Schwab).

This isn’t a season for casual watching. We’ve previously described this show as background noise. But, if you’re a fan at all you need to pay attention to every minute this season or you’ll lose one of the threads. Former enemies become allies. There are double-crosses and misdirects and so many people were introduced that I missed someone’s name being mentioned and had to rewatch half of an episode to make sense of everything that followed. It’s exciting and there are some good performances, but there is still nothing that makes Jack Ryan stand out as a show. It joins the ranks of all the other action franchises built around the idea of American exceptionalism. They allow us to root for heavily armed CIA agents getting into chases and shootouts on the crowded streets of foreign countries. It’s getting more difficult to watch stories about our government injecting itself into other countries’ instabilities when, you know, we can’t even come to a consensus on whether or not what happened in D.C. on January 6th, 2021 was an attempted coup or just an exercise in free speech. Somewhere, someone is writing a treatment about the government of some other country having to step in to save America from itself and we aren’t going to like it very much.

Not that I’m rooting for Russia in any real or imaginary conflict. However, I am rooting for James Cosmo (Braveheart, Highlander), who is quietly terrifying as former Red Army officer and spymaster General Luka Goncharov. His complicated ties to the plot are revealed in multiple flashbacks to 1969. Nina Hoss (Tár, The Defeated) also does a serviceable job as the tough but politically vulnerable Czech President with a complicated family history.

Wendell Pierce, the only worthy successor to James Earl Jones as Jim Greer, is as reliably wonderful as ever. He drops his first f-bomb within the opening fifteen minutes of the first episode and it’s like hearing from an old friend after a long absence. Greer and Ryan are apart for much of the season and their easy camaraderie is missed. But Greer’s role is expanded over previous seasons and I’ll take all of the screentime Pierce can spare.

The real MVP though is Mike November, played by veteran “That Guy” actor Michael Kelly (Everest, House Of Cards.) A one-man cavalry, November takes a lot of punches but still cleans up real nice. November and Ryan spend a lot of the season together, wise-cracking with bruises on their faces. It’s a good team-up that allows Krasinski to smuggle a little of Jim Halpert into the role. Otherwise, it’s mostly him serving up his version of Blue Steel and making dire predictions about the state of affairs. He continues to be aggressively Just Fine in the role of Jack Ryan, which makes him perfectly fine for this solidly B-average show. It’s just not doing anything new. Over on Netflix, Noah Centineo’s The Recruit is bringing more fresh air to the genre.


← It's Unclear Whether Kevin McCarthy Will Be Voted Speaker of the House | What Are Your Pop Culture Resolutions for 2023? →