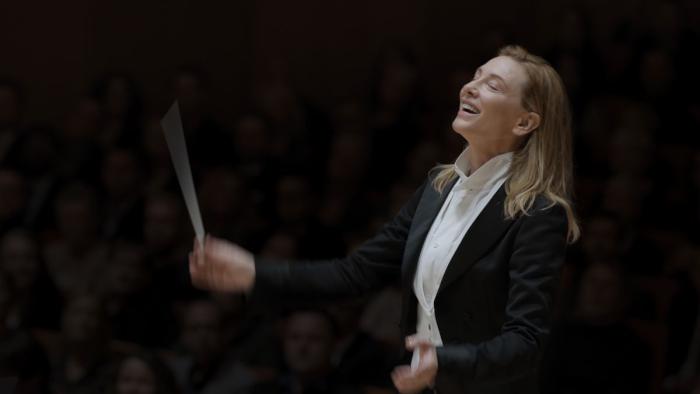 The shades of morality surrounding how to reconcile the Art with the Artist when the Artist turns out to be a bastard person has become one of the defining conversations of our moment. As the power structures many had taken for granted for decades, hell centuries, have been necessarily called into question, we’ve watched the system shriek and sway in horror and confusion—indeed there’s been a whole lot of noise but, no matter what Fox News would have us believe, very little in the way of real reparations for those who’ve been abused. Every six months another Mel Gibson movie pops up and a little piece of me dies with it.

That the conclusive “Cancel Culture” movie might end up being the one about a queer woman being canceled for her past sins, and it’s one that was directed by a straight man and that stars a straight woman, is a savory stew of irony to me, indeed. But it’s hard to deny that Todd Field’s Tár, featuring what might very well come to be known as the already-two-time Oscar-winner Cate Blanchett’s definitive performance, is a powerhouse from top to bottom. So yeah, calling Tár the Hashtag-Me-Too movie is reductive in the way that calling Taxi Driver a “drive around Manhattan” would be. But it’s also squarely on the mark with uncanny headline-baiting aplomb too. It’s unmissable now, and quite possibly forever.

The great Cate here plays Lydia Tár, the maverick conductor of the Berlin Philharmonic and the sort of world-renowned classical musical legend that admittedly feels a little far-fetched in the year 2022, as that scene becomes more rarefied and airless with each passing decade. Long long gone are the days when Leonard Bernstein taught kids the joys of Handel on his televised “Young People’s Concerts” every Saturday evening on CBS, but Tár beckons herself back toward that golden age anyway—indeed it’s Bernstein she most embraces, reveres, and we watch her speak to a captive New Yorker audience with impeccable eloquence regarding his influence upon her.

But then everything about Tár is impeccable and eloquent, from her lion’s mane of blown-back hair to her perfectly tailored suits. (If staring at Cate Blanchett in suits is your thing like it is mine then prepare yourselves, cuz this movie might fling you straight into the stratosphere.) To be led through her modernist Berlin home of wood and stone and endless bookshelves was for this reviewer a gaze directly into heaven itself. But I can admit that the one shot of Tár’s daughter’s bedroom looking like a cement prison-cell did hammer home the trade of form over function—just one of many such choices made, like Architectural Digest with a copy of Highlights tucked inside. Tár is the study of elegance, but all just a whisper disheveled enough to make it seem more natural—an extra care beyond the care to make it seem more careless. A moment when she poses for an album cover triple underlines how precisely measured and maintained this presentation of refined perfection is; it’s one effortless gag in a film full of humor, even as it tightens its grip around your throat.

Field’s film takes its exquisite time in its tightening of the art-installation’s worth of nooses that Lydia Tár is sticking her swan-like neck into, letting us watch this Artist be truly brilliant and worthy of all the plaudits she receives. There’s almost nothing more satisfying than watching talented people exercise those skills, and even though I remain stubbornly clueless when it comes to the stuff of making music I could see plainly that Tár’s real good at what she’s good at. So good that she’s gotten clueless about anything but that, and sees nothing but her aims and goals. The people around her are abstract paintings she’s hung on those beautiful apartment walls in between her art-books and battered scores. When she talks her partner (Nina Hoss, exceptional as ever) down from a panic attack it’s with an air of concern so studied it feels marked on paper. Notes pre-arranged.

The single-mindedness that’s driven Tár to the top, where every interaction is transaction, will of course turn out to be the same path that she shoots herself off from, quite like that yodeling mountain-hiker on that Price of Right game. So caught up in the momentum of her narcissist pursuits that she starts thoughtlessly pushing aside those who know her secrets—including most crucially her personal assistant and mentee (Noémie Merlant from Portrait of a Lady on Fire, all big eyes and patient watchfulness)—it all unravels with spectacular quickness, all while Blanchett launches into a master-class in internalized flop-sweat. An eye-twitch on this perfectly appointed woman might as well be an eight-point earthquake.

It’s been sixteen entire damn years since Todd Field last made a movie with the sexy suburban hellfire that was Little Children, and that was only his second motion-picture, following the debut revelation that was his film In the Bedroom five years earlier. Before that Field was known as an actor, and it feels crucial to me that one of his final acting roles before turning director was in Stanley Kubrick’s Eyes Wide Shut, as the scale of Field’s superlative attention to detail feels truly of a piece and a kinship with that master filmmaker. Tár I think will stand shoulder to shoulder with any of the best that Kubrick made. Here’s to taking your time and getting it so right that it becomes the definition.


← Martin McDonagh's Bleak Comedy 'The Banshees of Inisherin,' Starring Colin Farrell and Brendan Gleeson | Both Sides Should At Least Agree on This Basic Principle: Murder Is Not OK →


Image sources (in order of posting): Focus Features,
Most Viewed