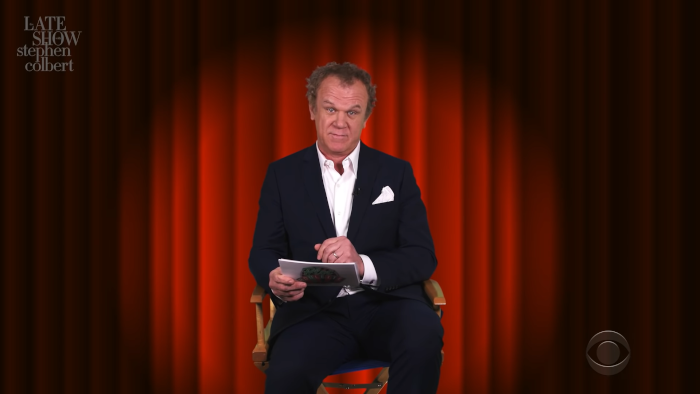 John C. Reilly Plays It Cool While Trying To Remember His Own Movies

John C. Reilly has one of my favorite types of careers. You can’t point to one kind of movie and say, “that’s a John C. Reilly movie.” His filmography is laden with comedies, dramas, television, indies, and big-budget films. You name it, he’s stolen a scene in it. With such an illustrious career, can he recognize randomly described movies that he’s been in? That was the question when he dropped by the Ed Sullivan Theater to chat with the Colbert crew.

Let’s start with the fact that Reilly embodies cool in this segment. He’s holding himself with a kind of swagger that feels inspired by his current performance in Winning Time. He’s rocking a suit with no tie, looking into the camera like he’s going to make sweet love to it, and tossing cards with reckless abandon!

He also has a hard time guessing some of the movies! But honestly, I saw The Lobster recently, and I would have had a hard time with that one too. The best parts are the looks on his face when he realizes what the movie is. He gets a big old grin and just kind of leans into it. Again, very cool.

I love John C. Reilly. The only thing that would have made this segment any better is if it were two hours long. Also, I would have appreciated a Walk Hard question or two. Dewey Cox will have his time in the sun! Some day.