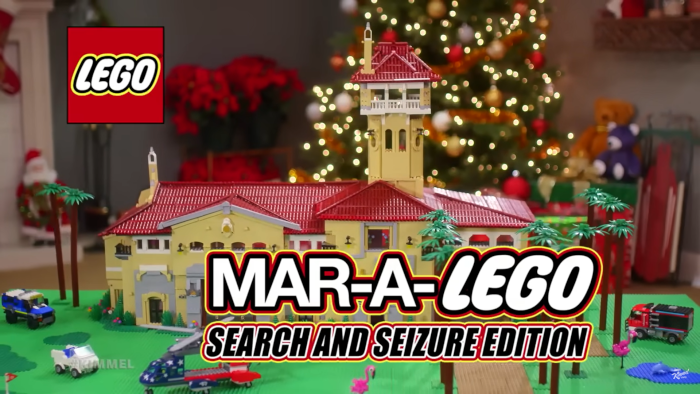 This year has felt long. Part of that is a result of my fatherly duties. Also, I’m happy to say I had a lot of work to do this year. With everything going on, it’s hard to remember what did and did not happen this year. For instance, did you know that the attempted insurrection at the US Capitol building was almost two years ago? It feels like yesterday! But, opposite that, the FBI raided Mar-A-Lago, home to TFG. To me, it feels like that happened years ago. But it only happened months ago, and Jimmy Kimmel slapped me in the face with that reminder.

On a recent episode of Jimmy Kimmel: Live, Kimmel’s gang dropped a commercial just in time for the holidays. It featured kids playing with a brand-new Lego set. A Lego set that allows you to recreate the raid on TFG’s gaudy home. It comes with everything. Secret documents. Saudi nationals. It even has Eric Trump stuck in a golf bag (because accuracy is key).

I just want to give props to Kimmel’s props department. Yes, TFG has a distinctive look, but the Lego version of him looks like a Lego product, as do the truck nuts and golf bag. I know they aren’t going to half-ass something like this, but the authenticity makes it funnier. It feels like an actual Lego set, and the commercial feels like a commercial. That may seem like a low bar, but dammit, the production value is important!

This was a surreal sketch to watch. Instantly I was reminded of one of the year’s most insane events, and my first reaction was to assume it wasn’t recent at all! My brain just assumed it must have happened after TFG’s attempted coup. Wishful thinking at its finest.