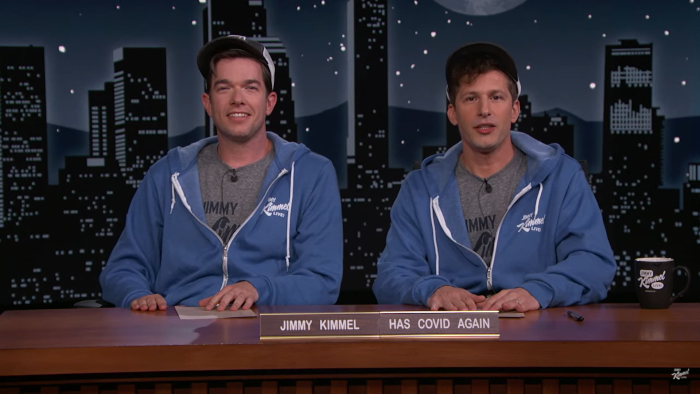 Just two weeks ago, Jimmy Kimmel had to step away from his show because he tested positive for COVID. Comedian Mike Birbiglia filled in for him and did a bang-up job. Unfortunately, Jimmy tested positive again. That won’t stop the show! Jimmy’s team was able to flag down two funny people this time: Andy Samberg and John Mulaney!

Samberg and Mulaney were there to promote their new animated movie Chip ‘n Dale: Rescue Rangers. While admitting that they haven’t performed together in person, their chemistry could not be stronger. Also, they handled it swimmingly for two people who were told they were hosting earlier in the day. That likely has to do with their SNL experience. Scripts for the variety show are known to change right up until it’s supposed to go live.

There is also a genuine friendship between the two. Chemistry is one thing, but true friendship and comfort bring forth a whole different kind of energy. The two interview each other, and it’s one of the more fun interviews I’ve seen in quite some time. The stakes feel low, they aren’t afraid to take shots at each other, and they’re just having a lot of fun. They even get to interview Cheryl Hines and again, the same result. Just a fun time.

Jimmy, I hope you feel better and your family is safe. That said, you sure know how to pick a good replacement.

← 'The Umbrella Academy' Season 3 Trailer: Fear the Kugelblitz | The 'Terminal List' Trailer Represents Everything We Dislike, and Yet ... →