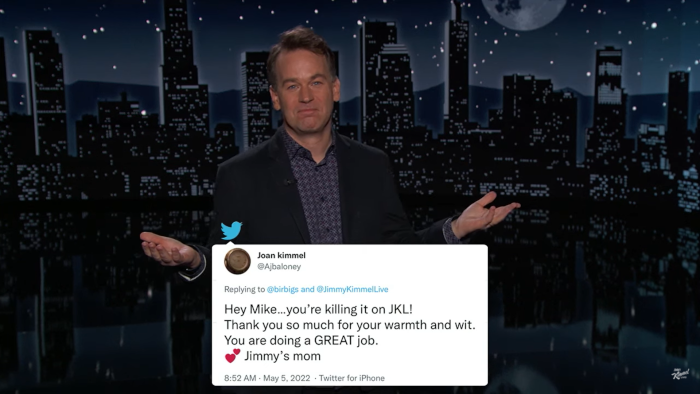 Mike Birbiglia is one of my favorite comedians working. I’ve seen him live many times. His work even helped get me through a breakup! Needless to say, I was very excited to hear that he’d be filling in for Jimmy Kimmel. I wasn’t happy that Jimmy got COVID, of course, just happy that he’d have another hilarious person stepping into his shoes.

Mike did not disappoint. He had a few things working in his favor. First off, he’s an excellent performer. He’s had stints on Broadway, Broad City, and other things that don’t start with Broad. There’s a comfort level that comes with having that kind of experience. Second, he’s clearly thrilled. He gives off an aura of someone who is living out their dream. Finally, as a replacement host, my guess is he doesn’t have to do much writing-wise? Again, that’s mainly a guess, but the stakes are likely low.

It also helps that Mike, being the charismatic person that he is, was fantastic with the guests. Maybe it’s the high of taking on a gig like that? He seemed genuinely interested in every single person he talked to. Yet another aspect of the job that is not easy at all. Regardless, Mike made it look easy.

However, as Mike’s mom said, “it’s a hard job.” Who knows if he would be able to sustain that level of quality night after night? Eventually, he’d have to interview someone he doesn’t want to talk to. A sketch would go south. Something would go wrong. That’s late-night TV. For now, enjoy Mike’s last monologue. Then stay for celebrities reading mom texts.