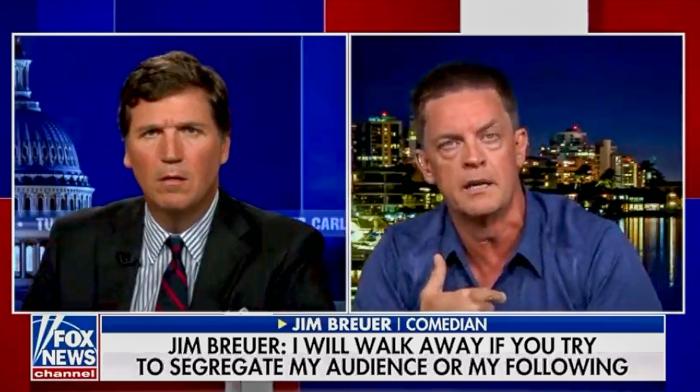 As we say goodbye to a deceased Saturday Night Live icon, another went on television last night looking like he also passed away earlier this week. Moderately successful 1990s comedian Jim Breuer made headlines for the first time in decades by canceling comedy shows at venues requiring a Covid vaccination. This was a surprise for a nation that didn’t realize people still paid real money to see Goat Boy perform. Breuer, whose last television credits are for a 2017 appearance in Kevin Can Wait (as always, blame Kevin James), appeared on Tucker Carlson Tonight last night to bitch about covid restrictions and spew pseudo-science mumbo jumbo.

Seems like one of those clips from a school board meeting pic.twitter.com/BND4dYrm7x

There’s more to his performative rant but I don’t recommend searching for it. I want you to know I Photoshopped the hell out of that header pic and it didn’t help. There’s no making Jim Breuer look like anything but a lovechild between John Schnatter and one of his pizzas. Breuer looks like he spent the last two decades subsisting entirely on spent brewery hops. If the bags under his eyes got any bigger he’d have to check them right before the pilot kicked him off for not wearing a mask. But enough about his appearance; what he said is worse.

“Our leader… pointed the finger like we’re the demons?” I mean, you’d rather people get sick than do the bare minimum. I think that qualifies as demonic.

“I’m not vaccinated, I had Covid.” First off, I’m surprised Covid survived in your bloodstream long enough to give you the sniffles. Second, for the infinitieth time, past Covid infections do not preclude future infections. It’s not chickenpox. You still need the vaccine.

“I know my body, I know my morals, I know my faith.” Jim, Jimmy, Jimbo… You know your body like I know particle physics. Your faith doesn’t protect you from disease. And last time I saw you perform (in like 2002) your morals included a 10-minute set on how it wasn’t fair you couldn’t use everyone’s favorite homophobic slur from the 1990s anymore because it’s not like you meant anything by it. The early aughts were a weird time, man. Everyone knew they shouldn’t be as cruel as they were in the ’90s but many folks didn’t know how to move away from it. After lots of trial and error and much-needed input from allies who were far more patient than we deserved, most of us moved past it. I get the sense that Jim — like Tim Allen, Larry the Cable Guy, Dave Chappelle, etc. — never did.

Anyway, Twitter had a field day (night?) with Jim’s appearance.

my first thought on hearing jim breuer had cancelled his shows was “wow jim breuer is still alive” but now I see I made an error pic.twitter.com/oVa60G4yEn

Weed didn’t do that to Jim Breuer.

Breuer, bee tee dubs, has allegedly been sober for the past 9 years or so. He found God, never a good sign, and left drugs behind. Sobriety is a wonderful thing and I strongly encourage anyone with a substance abuse problem to seek treatment in whatever form best suits them. Maybe don’t leave rationality in the same trashbin as your bong, though.