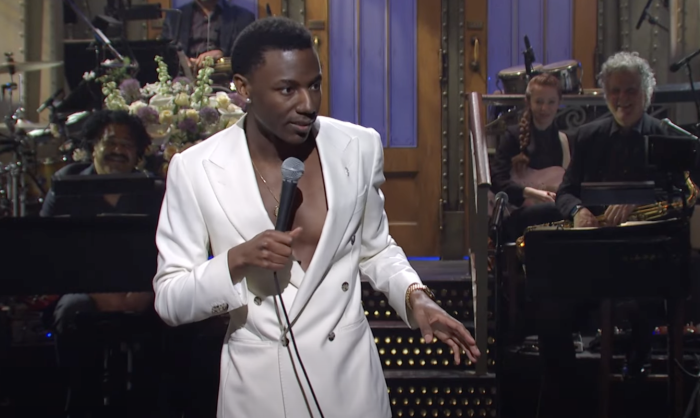 Cold Open — Fox and Friends chat with Clarence and Ginni Thomas (Kenan and Kate). Thomas plays it “close to the vest,” while Ginni talks about taking down the “Biden Crime Family.” Cecily’s Jeanine Pirro shows up to talk about how Disney wants to “turn your children gay.” Then she shotguns a beer. Trump guy talks about “The Slap” briefly to talk about the hit to Kevin James’ career and a bunch of nonsense. It’s all very meh. (Watch Here) (Score: 4 out of 10)

Jerrod Carmichael Monologue — I watched Carmichael’s stand-up special, “Rothaniel,” right before this, and it is brilliant. In this monologue, Carmichael talks at length about not wanting to talk about The Slap. “I feel like we’ve been living in the wake of it our entire lives.” He wasn’t going to talk about it, but Lorne told him he needed to because “the nation needs to heal.” Then he talks about coming out as gay on his stand-up special before deciding that Obama needs to be the one to heal the nation over The Slap. He is so good. (Score: 7.5 out of 10)

Is My Brain Okay? — A game show hosted by Kate McKinnon about how our brains are in this post-Covid world (not good). “Every answer is something you knew before Covid, but the question is now: Can you remember it?” Questions like, “What day is it?” Needless to say, no one’s brain is okay. It’s all funny because it’s true. (Score: 7 out of 10)

Short-Ass Movies — Pete Davidson is back. He and Gunna write a rap about wanting only to watch “short-ass movies,” and Simon Rex (SIMON REX) makes an appearance, and he is a surprisingly good Jim Varney. It’s another one that is funny because it’s true. (Score: 6.5 out of 10)

ShopTV — Kevin Lickitt (Carmichael) promotes a new doll called Rhylee Rainbowlocks, whose hair grows back after you cut it. The joke is, uh, that the doll has a thick-ass “rainbow bush.” There’s surprisingly a lot of mileage in the joke. It’s wrong. It’s so, so wrong. I’m sorry Mat, but this is the Mat skit of the week. I’m so so sorry. (Score: 7.5 out of 10)

Seat Fillers — Jerrod Carmichael plays a seat filler who adores Will Smith … until The Slap. And then he’s super uncomfortable because they think that Smith is a sociopath. Of all the ways they could have handled it, this is not the funniest, but they had to do something, so … (Watch Here) (Score: 5 out of 10)

Weekend Update — “Update,” meanwhile, goes to town on Will Smith, and they somehow find the 10 jokes that still haven’t been made 6 days later. Cecily shows up as (racist) Sen. Marsha Blackburn to talk about the Supreme Court hearings and, uh, “define woman.” Cecily’s Blackburn is like all of her drunk characters, only Southern! Kenan’s OJ Simpson also weighs in on The Slap. (Score: 7.5 out of 10)

Pop Pop’s Funeral — Two guys from a mortuary come to a cliff with the family to spread the deceased’s ashes, only they didn’t cremate him first. (Watch Here) (Score: 4.5 out of 10)