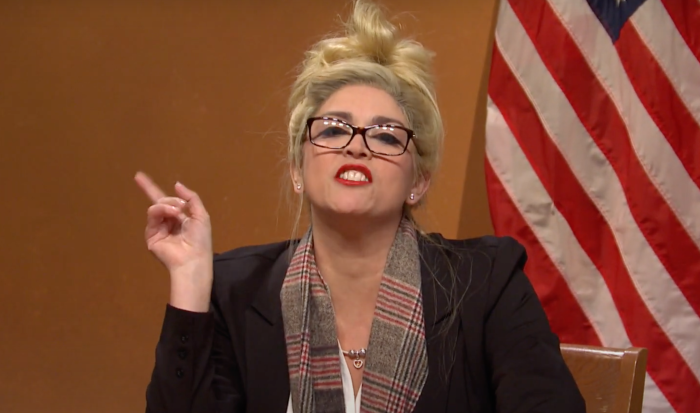 After a Much-Needed Break, Jason Bateman (and Bowen Yang) Quietly Deliver the Best 'SNL' of the Season, So Far

Cold Open — After spending the last few days mocking Rudy Giuliani and Melissa Carone as SNL caricatures, Cecily Strong returns(!) to plays Carone with absolute perfection. Is this SNL fan service? I’ll take it. Another witness claims that she ate a bunch of ballots, which were served by the Democrats in a food truck, and I honestly don’t know if a Trumplican actually suggested this or not. Where’s the line between satire and reality? (Score: 6.5 out of 10)

Jason Bateman monologue — Bateman, who hosted the show 15 years ago, tells a terrific anecdote about his encounter with a chimpanzee on his first episode with documentary evidence from the sign-off to prove it. It’s a great story, and much better than the gimmicky monologues that typically dominate the show. Better still: There’s no singing. (Score: 7 out 10)

Sleepover — This is a variation of a similar skit from a while back where a father has to get to the bottom of a mystery at a sleepover, this one where one of the girls got menstrual blood on the couch and then made the situation much, much worse by trying to fix it. Not a bad skit, but it speaks to how good tonight’s show is that it’s the weakest of the episode. (Watch Here) (Score: 6 out of 10)

Santa’s Stan — Pete Davidson as Eminem sends a letter to Santa Stan-style, and he really wants a PS5, and is really obsessed with Santa. The skit culminates with a cameo from the actual Eminem himself and a disturbing reminder of the f*cked-up origins of the term “stan.” Bowen Yang does a great Elton John, to boot. (Score: 8.5 out of 10)

Outdoor Cabaret — Cecily Strong, Jason Bateman, and Bowen Yang do a cheesy lounge singing act in the pandemic, and honestly, it’s over-the-top as hell but absolutely terrific. Bowen Yang is on his way to becoming the next break-out star of SNL. This is why. (Score: 8 out of 10)

The Christmas Conversation — A group of daughters try to explain to their mothers on Zoom that they will not be coming home for Christmas this year. The convos do not go well. I am not in a situation like this, but I expect that these conversations ring true for a lot of people around the country right now. (Score: 8 out of 10)

Morgan Wallen Party — For those of you who don’t know, Morgan Wallen is a country musician and the musical guest tonight. He was originally booked to be the musical guest two months ago, but he got caught on social media out partying in Alabama and got booted for violating COVID policy. Wallen is back tonight, and this skit is about that incident. It’s very meta, and pretty cute. (And if you watch him perform, you might also notice that he has a legit mullet. In 2020. Wow.) (Watch Here) (Score: 6.5 out of 10)

Santa’s Village — This year, Santa and Mrs. Claus are in plastic bubbles because of COVID, which gives both Bateman and Cecily Strong a fine opportunity for some hysterical physical comedy. (Watch Here) There’s not really a Mat sketch this week, but the physical comedy here is probably the closest. (Score: 6.5 out of 10)

The Bit — It’s a testament to how good tonight’s show has been that even Kyle Mooney’s 10-to-1 sketch is … great? It’s awkward as hell, and more autobiographical than Mooney might want to admit, but funny, all the same. (Score: 7 out of 10)