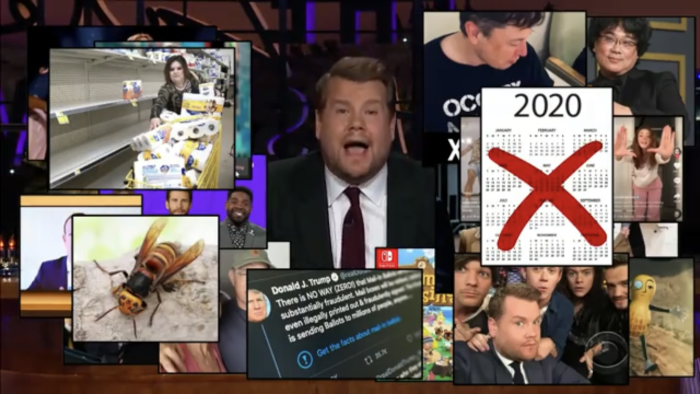 2021 is almost here, y’all!!! Huzzah! I can practically taste the change. Can I guarantee that change? No. However, heading in with a positive mindset and leaving this shit-tastic year behind us will be key. Before we exit the year that gave us Tiger King behind, let’s take a trip down memory lane with James Corden!

Last week, Corden did a rhyming recap of 2020 and it’s pretty damn impressive. He fits most of the year’s events in just under three minutes. The bit is right in Corden’s sweet spot. It’s theatrical and silly and unrelenting. Just when you think the bit is going to end it keeps going (but not in an insufferable way).

The segment, broken up into… sections, honestly covers way more than I expected. Not because I thought there were certain things they didn’t cover but because I’ve apparently forgotten a LOT from this year. Remember how good it felt when Parasite won Best Picture at the Oscars? I do, because I had people over to see it happen because it was still safe to do so because, I assumed, it happened in 2017. NOPE.

While I will shed no tears when the clock rolls over tomorrow night, it is crazy to think that so much happened this year. Then I think, was it a lot? Are we just hyper-aware of every event be it major or minuscule because most of the world simply ground to a halt? Maybe that’s why I forgot so much as well? It’s honestly hard to judge at this point.

When the new year begins, maybe I’ll keep a journal. That way I can keep track of every little thing that happens. Though I reserve the right to, in case of a repeat bad year, burn that journal in a ceremonial fire.