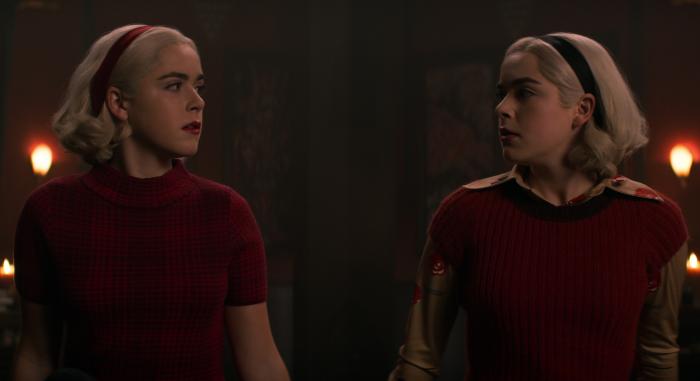 Season 3 of Chilling Adventures of Sabrina ended with the titular character’s decision to leave the time loop open, resulting in two different versions of her. Sabrina Spellman would live out the rest of her days as an earthly witch while enjoying the benefits of going to regular old Baxter High School; Sabrina Morningstar would remain in the infernal realm, ruling as the queen of Hell alongside her father, Lucifer Morningstar himself. With that kind of ending, the fourth season, which is also the show’s last, had a lot to live up to. Between two iterations of Sabrina — both of whom are played by Kiernan Shipka — duking it out with the eldritch terrors, ancient entities whose arrival marks the end of days, and overcoming personal roadblocks, Chilling Adventures of Sabrina drops the ball on providing closure or compelling enough mythology for its final outing.

The fourth season picks up almost immediately where the third season left off, with the two Sabrinas agreeing to co-exist without telling anyone their secret. That lasts for about two seconds before Sabrina’s cousin Ambrose (Chance Perdomo) finds out about their ruse, though he promises to stay quiet despite his warnings that their situation could only lead to chaos. Meanwhile, Father Faustus Blackwood (Richard Coyle) has unleashed the eldritch terrors, destructive forces that are akin to the Four Horsemen of the Apocalypse and include figures such as the Weird, the Returned, and the Darkness that show up ahead of the Void, which brings about the end of the cosmos. Sabrina, along with her family, including aunts Hilda (Lucy Davis) and Zelda (Miranda Otto), witches coven, and mortal friends — Harvey (Ross Lynch), Rosalind (Jaz Sinclair), and Theo (Lachlan Watson) — must stop the ancient terrors from destroying everything they hold dear.

The series’ mythology has always been sorely lacking. It doesn’t go far enough or delve deep enough into the backstory of witches or the various covens that surely exist outside of Greendale. Chilling Adventures of Sabrina resides in its own bubble, with apocalyptic storylines that rarely venture outside of its comfort zone or the town itself. This continues in Season 4, which makes the plot feel rather claustrophobic rather than all-encompassing and terrifying. This changes slightly in the penultimate episode, when the show goes meta and introduces aunts Hilda (Carolina Rhea) and Zelda (beth Broderick) from the ’90s sitcom Sabrina, the Teenage Witch. It’s a fantastic episode, filled with a unique plot that offers Sabrina some meaty material and its pacing and execution makes for the most memorable and exciting episode of the season.

Yet again, however, the narrative sidelines Tati Gabrielle’s Prudence, a fierce witch whose exploration is limited to a revenge plot against Blackwood, her neglectful and devious father. Prudence began as an intriguing frenemy to Sabrina before becoming a full-fledged ally. She is a character brimming with untapped potential. Unfortunately, the series has never been interested in delving further into her backstory or the history of Black witches within the coven. As for Prudence’s vengeance against her father, who is a pitiful, power-hungry misogynist, it’s barely a blip on the radar and her arc is resolved in one scene near the very end of the season. In Season 4, Prudence is treated as nothing more than an afterthought with no room for personal development or relationship building. It’s a shame too because Gabrielle has fantastic screen presence and exudes such personality, doing her best with the very little material she is given. 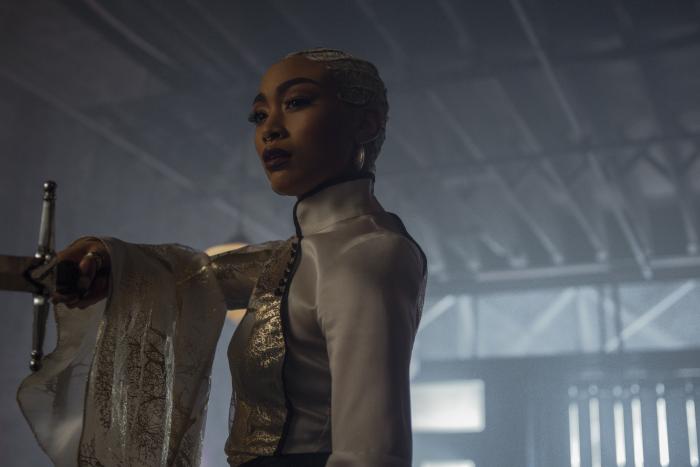 Frustratingly, the final season doesn’t bother exploring Sabrina’s duality. While it’s refreshing that the two Sabrinas aren’t enemies, the earth-bound character is envious of her hellish counterpart’s happiness with Caliban (Sam Corlett) and grows briefly resentful of her friends’ romantic relationships. What’s interesting here is that Sabrina, more than anything, faces an identity crisis of sorts. She thought she’d be happy with regular things like high school and attending the witches academy. But would she rather be ruling the nine circles of Hell? Or is it something she wants now that it’s no longer her responsibility?

Sabrina has thrived on chaos since her 16th birthday and a “normal” life may not actually be what she needs, after all. However, Chilling Adventures of Sabrina is more interested (and rather obsessed) with Sabrina’s love life (or lack thereof) in lieu of a more personal in-depth study as to why she doesn’t feel like she fits in anymore despite getting what she wants. Just as she’s on the cusp of realizing and exploring who she is by herself, Nick Scratch (Gavin Leatherwood) swoops back in to win her over because they’re “endgame,” he says. The series has all the subtlety of a bulldozer, after all.

What’s more, the eldritch terrors aren’t exactly villains who parallel the characters with regards to themes and therefore don’t advance them as people. Plus, the Void is meant to bring about the end of all things, but Season 3 had already gone all apocalyptic, so it wasn’t very thrilling or suspenseful the second time around. Lost amid the exposition and the exceedingly plot-heavy episodes is the character development. There’s absolutely no time to stew in the aftermath of the story and its effects on the characters’ emotions before they’re on to the next big spectacle. It’s exhausting.

If it weren’t for the talent of the actors (who sell the somewhat clunky dialogue with their impassioned intonation), Chilling Adventures of Sabrina would be nearly devoid of emotional depth. That is very much needed for the story’s big finale, one that turns Sabrina’s world upside down and relies on the strength of the series’ relationships. While it’s clear the writers tried their hardest to nail the landing and bring closure to the characters and viewers, there was something rather empty about all of it. Honestly, the series would have been better off if there was a bit more downtime for the characters to simply just be. As it stands, I was left disappointed with the way things ended and relieved that it was finally over.

Chilling Adventures of Sabrina Season 4 is streaming December 31 on Netflix.

← James Corden Recites A Rad Rhyming Recap Of 2020 | Review: Vanessa Kirby Scorches In 'Pieces of A Woman' With Shia LaBeouf →